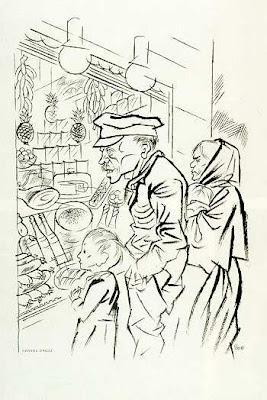 The theme of want and deprivation is infrequent in current art works I'm familiar with. In the earlier part of the twentieth century, it was a different story. I was looking at the small collection at our local museum at the University of Michigan, wondering about the theme of food, food vendors, meals, and the other food themes I often notice. I found nothing (unless you count still life, which I don't). However, here is the picture that captured my attention: "Hunger" by George Grosz, Germany, 1924. His satires, I read in the accompanying documentation, called attention to the unequal effects of the economic downturn of the time. Sometimes his works prompted government censure.
Posted by Mae Travels at 6:17 PM

Käthe Kollwitz (1867-1945) is another artist of those times who has depicted the agonizing situation of the starving, unemployed and war-ravaged. A generous sample of her work, mainly in pencil, charcoal, or conte crayon, can be seen at:
http://tinyurl.com/ybqur5q

Jens,
The selection of works by Kollwitz that you linked to is very interesting. The approximately 50 works depicted show suffering of a number of kinds, but none of them deal with the theme of food/hunger. For example, Kollwitz doesn't show people eating a scanty meal (like Van Gogh's Potato Eaters) or anything like the Grosz image of hungry people with food they can't afford.

Well, I take your point about not actually showing food, but hunger is certainly the driver for:

#11 Title "Bread!" in the series to which I gave a link. Also among her other works:

Jens,
I agree: the Hungry Kids painting is a dramatic portrait of hunger. Thank you for pointing it out.

Hunger does not come from lack of food but from the unequal distribution of wealth, was Grosz's message, also very applicable to the current hunger situations.