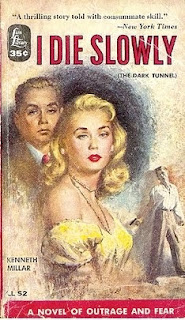 "Although it bears a certain physical resemblance to the University of Michigan at Ann Arbor, Midwestern University is, like all the characters in this story, a figment of the author's imagination," reads the disclaimer right after the copyright page.

I can still mentally follow the path of the brave narrator as he flees from both an evil cross-dressing Nazi spy and the local police who believe the frame-up job that's been done to him. Despite 65 years of growth and development, I recognize the campus buildings, the museum just to the north, the steam tunnels, the power plant, the hospital on a hill, and the rural area to the east (no longer rural now) where he tries to hide in a seedy roadhouse full of drunks.

I wanted to reread this obscure tale because I had forgotten most of it. I found it still very readable and suspenseful. I had always thought the seedy roadhouse was identifiable as a still-existing restaurant east of Ann Arbor. I'm not so sure any more. I don't think the distance the narrator runs after going past the hospital is necessarily far enough. I was hoping he would describe a little more about the place and what he ate there -- all he does there is order a fried-egg sandwich for thirty-five cents, served on a cracked plate along with some whiskey. And then go on fleeing and solving the mystery of who is spying and who killed his friend and made it look like suicide.

It's really not a food-themed book; the narrator eats one other egg while being held prisoner in the University hospital, and then is let go by an FBI agent who believes his story. He continues to help the FBI agent chase down the spy ring. Later he ends up in another hospital in Northern Ontario where he eats "a good dinner, roast beef and Yorkshire pudding and mashed potatoes and gravy and a quarter of a lemon pie" while waiting to finally do in the villain. Interesting menu. There are all kinds of interesting historical attitudes and details in the book, as well as the descriptions of "Arbana" which are so recognizable.

The Dark Tunnel was originally published under MacDonald's real name, Kenneth Millar, under the title I Die Slowly -- I located the image of an early paperback edition (right/above). Subsequently the author moved to California, writing a large number of successful books under his pseudonym.
Posted by Mae Travels at 1:44 PM