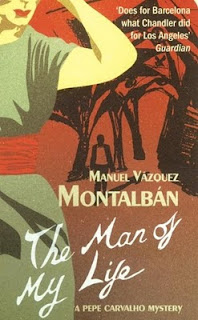 European football, Milton Friedman, Friedrich von Hayek, the Bible, Walter Benjamin, ancient temples of Aphrodite and other gods, the Cathars, the Templars, Catalan Nationalist plots, politically motivated thugs from Yugoslavia and elsewhere, and lots of other cultural, political, and local color from Catalonia -- the world of detective Pepe Carvalho includes all of them. In the book The Man of My Life these themes alternate with Carvalho's relationships (including fairly graphic love scenes) with two women that he had loved 20 years before, and one younger one, along with their husbands, pimps, sons, and dozens of other characters. And the time frame, the week before the beginning of the new Millenium, seems to have significance but I never quite saw what it was.

What's not very prominent in this bewildering pastiche? There's incredibly little about the murder that the detective is supposed to be solving. Sometimes he seems to be pursuing some clue but it's usually buried in all the references and distractions. Towards the end, among all the sinister plots and intellectual showing off, there's a cursory explanation of the political motive for the crime and the ID of the perpetrator, which had been kind of obvious if not central to all the other goings-on.

Author Manuel Vazquez Montalban is pretty obscure -- and he deserves his obscurity! This book made me really appreciate Dan Brown's ability to focus on a single plot in The Lost Symbol, where 12 hours of action take 500 pages without a deviation from the central conspiracy theory.

Of course, the reason I read the book is that Carvalho is famous (insofar as anyone has heard of him) for his gourmet meals, his choices of restaurants, and his personal cook Biscuter. In The Man of My Life, a number of meals and foods are described in great detail, sometimes for several pages with every nuance of preparation. Like the intellectual, political, conspiratorial, cultural, and sex stuff, the recipes ultimately distract one from whatever might be central to the plot. But they do sound delicious and interesting, even when interspersed with other thoughts. Some examples -- more or less each with a different girl friend and sometimes a bit of politics involved:
In the case of the meal based on the recipes of the Basque chef, the description of the details of cooking goes on for several pages interspersed with his relationship with Charo etc. The vegetables and herbs included asparagus, leeks, cauliflower, Chinese shitaki mushrooms, spring onions, parsley, thyme, and mint. The marinade includes shallots, olive oil, coriander, black pepper, white wine, lemon zest, mushrooms, raisins, and tomato. And when it's not clear how to use the marinade, Biscuter finds the phone number of the restaurant and asks the chef-recipe author for advice. Finally, Carvalho roasts the lamb and chooses a wine -- Soneto de la Rioja red, which surprises Charo.

Well, I like detective fiction with a good serving of culinary details. But I really prefer when all the details support and advance the story. Montalban's style is just too diffuse for me.
Posted by Mae Travels at 10:33 AM