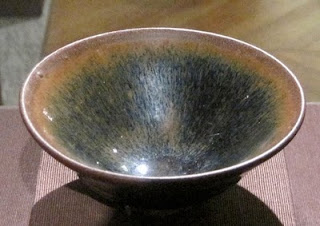 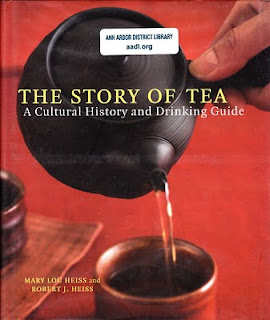 Recently, my culinary reading group read a very nice tea book; see "Liquid Jade". I decided to look at another book, The Story of Tea: A Cultural History and Drinking Guide. I'm very glad our discussion leader opted for the one we read -- he considered this one, but it was too expensive. It is also a highly technical book about tea cultivation, production, varieties, and tea tasting. Since I'm not a connoisseur, the book is too much for me, and I only scanned it.

Any book has some interesting tidbits, though, and I was struck by various bits on the history of tea-drinking vessels in several cultures. Here is what the book says about a certain type of Chinese teacup:

In museums I've often seen these rabbit-hair glazed teacups and found them beautiful. Later I believe the Japanese came to value them also. So this information about their origin appealed to me.

Addendum: this afternoon at the Detroit Institute of Art I photographed a Chinese tea bowl of the era and type described in the above passage (photo at top of blog post). The label reads "Tea Bowl, 960-1279, Stoneware, iron 'hare's fur' glaze; Jian kilns, Fujian province, China."
Posted by Mae Travels at 10:12 AM