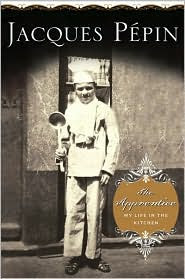 In anticipation of a future culinary book discussion, I've been reading The Apprentice: My Life in the Kitchen by Jacques Pépin. The early chapters capture an era of life in France that I almost experienced, just after World War II, when prosperity returned to Paris and reached into the provinces, but before many elements of life were modernized. The last part of that era, in the mid-60s, corresponds to my first stay there, which has made me permanently curious about life in that time.

Pépin's earliest memories were actually during the war in villages and the countryside. The war affected his childhood , but didn't exert the hardships that many Europeans suffered. Once the war was over, his mother began to buy old dilapidated restaurants, to restore the buildings with the help of his father, a carpenter and a good wine buyer, and to develop clientele. After each restaurant was making money, she would sell and buy a better one. Pépin describes her activities vividly, and creates in the reader an awareness of the many lessons he learned, perhaps above all the lesson of never wasting any edible food no matter how marginal it seemed. For example, she used the dregs at the bottom of wine casks to make wine sauce.

At age thirteen, Pépin took his school-leaving exam and became the lowest apprentice in a restaurant kitchen in Bourg-en-Bresse. I found nothing surprising about his description of apprenticeship, based my on reading other stories of old-style French restaurant life. He experienced long hours, hard work, no pay, occasional harassment, and high expectations on the part of his chef.

The most vivid descriptions deal with Pépin's view of food. He stresses that learning to cook meant watching, imitating, touching, hearing and smelling. No written recipes and few oral instructions characterized his experience. He writes:

By touching a piece of meat, I learned to determine its degree of doneness. Raw meat was spongy, well-done meat hard. I learned precisely how to determine all the stages in between by pushing a finger against the surface of the meat. Hearing was significant, too. The snap of an asparagus spear, the crunch of an apple, the pop of a grape are all indicators of freshness and quality. I learned to listen to the sizzling sound of a chicken roasting in the oven. When le poulet chante (the chicken sings), I knew that the layers of fat had clarified, signifying that the chicken was nearly done. Smell was of importance in recognizing quality. A fresh fish smells of the sea, seaweed, and salt. Fresh meat has a sweet smell, fresh poultry practically no smell at all. Melon, pears, tomatoes, raspberries, oranges and the like each have their own distinctive fragrance when perfectly ripe. (p. 59-60)

After receiving his working papers as a chef, Pépin worked in several famous restaurants in Paris, and was drafted into the French army. Instead of being sent to the war in Algiers, however, he was assigned to be the chef first to a cabinet minister and then to the Prime Minister. From his later perspective as an American chef, he realized the major contrast in attitude of French and Americans towards even the most highly-placed chefs. Unlike chefs at the White House, he received no attention (not even a mention in a magazine, much less an article) as a result of having cooked for Charles DeGaulle.

Pépin's experiences in America (which I haven't finished reading) seem interesting enough, and he did participate in some major restructuring of American tastes and views on food. I suspect that the chapters on his French experiences may end up being my favorites.
Posted by Mae Travels at 3:07 PM