“The Strange Journey of Alice Pendelbury” 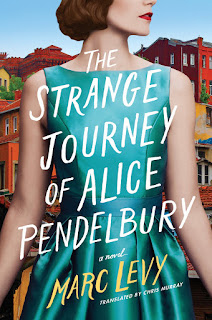 Marc Levy is a best-selling French novelist. This is the first of his books that I have read. I was disappointed for the same reason that very popular historical fiction often disappoints me: it does too good a job of meeting my expectations. As a result, books like this don't seem to offer any new insights about its historic time and place, and often portray their characters with 21st century social and cultural attitudes.
The Strange Journey of Alice Pendelbury begins in London  in 1950, just after the war. Most readers would have some expectations about this setting: the neighborhoods that are not yet restored after the severe bombings, the lives that are affected by loss of loved-ones, the shortages and rationing of food and clothing that are still in effect, and the feeling among Londoners that the rest of the world is healing more quickly. These are cliches. And the author relies far too much on these cliches: it’s too predictable. Amidst these conditions, Alice Pendelbury, the main character, lives in a studio apartment all alone. She has a few friends and no family: they died in the bombing.

On page 15, a fortune-teller discerns a very unexpected future for Alice. Because of her visceral reaction to the fortune-teller’s prediction, Alice soon afterwards travels to Istanbul with her next-door neighbor. The rest of the novel is a quest to discover the truth of the prediction. It’s a long quest, which many readers probably find quite suspenseful and enjoyable, but again, I found it a bit too full of cliches. (I’ll forgo presenting plot details since you might want to read it and find out for yourself.)

All in all, I found Alice’s story to be a kind of over-the-top melodrama. The descriptions of Istanbul seemed mostly the sort of thing that you could find in a 1950s guidebook. Alice’s air travel from London to Istanbul was presented with all the expected details from the early days of commercial plane travel. On arrival, Alice and her travel companion checked into the Pera Palace Hotel — which was the major high-end place for famous European visitors from early in the twentieth century until the end of World War II. By 1950 when the novel takes place it was actually a bit run down because of political choices made by the Turkish government (its Greek owners were expelled and it was given to a native/Moslem Turk), but the decline doesn’t seem have happened in the book. And on and on.

There were also some questionable details — small ones but they bothered me. For example, Alice’s traveling companion brings her a beautiful evening gown to wear to an event at the British Embassy. She says it’s lovely and he says:

“It’s a French model called the ‘New Look.’ They might not be much at the art of war, but I have to admit that the French have an undeniable genius for dressing women ... .”

Remember, the novel is set in the year 1950. Dior’s “New Look” debuted in Paris in 1947 and was a sensation, noted throughout the world. To show you how famous this was: the term “New Look” was coined by Life magazine. So the characters’ unfamiliarity with the style by 1950 is a bit off. This is a detail, but the kind of detail that disrupts my trust in a a historical novel.

Alice Pendelbury’s distinguishing feature was her acute sense of smell:

“Alice had a rare gift: she was a ‘nose.’ Her sense of smell was so acute that she could distinguish and memorize the slightest odor. She spent her days alone, bent over the long wooden table in her flat, blending different essences to obtain combinations that might one day become a perfume. Every month she made the rounds of the London perfume shops, offering them her new creations.” (p. 6)

Throughout the book Alice is highly aware of aromas and the way they trigger her memories. She seeks out unusual combinations of fragrance that create a characteristic ambience, and she designs perfumes and other aromatic products. Normally, I would find this a very compelling theme in a novel. Unfortunately, I thought that like many things here, the depiction of smells and the memories they elicited was presented in a formulaic and mechanical way. Again, I found this a source of disappointment.

Similarly, the descriptions of food in this novel seem done by rote. The scarce groceries in London, the cups of coffee, the Turkish breakfasts, and the fine restaurants were all described in a way that I found too predictable, too superficial, and  too close to what I’ve read in many other accounts of travel. I was also a little skeptical about the accuracy: for example, eggs, meat, and bacon were rationed until 1954, but the characters seem to find at least some of them in the shops. Maybe they had ration cards or something for the small quantities they bought; this wasn’t mentioned and again is only a detail.

I’m sure my reactions to this novel are eccentric: many readers obviously find this author very compelling. Sorry to be a malcontent. This book was one of 10 free books offered on Kindle this month. The author was on my “maybe read” list so I went for it. I hope I more throughly enjoy the others I chose.

Sad when a book is too predictable...
You made me giggle. I hate questionable details, too.
No. Don´t be sorry. It´s a good review.(As in... I´ll skip it and I know why)...
My kindle doesn´t advertise free books... how do you find them?

I’ve had this book in mind, thanks for the great review,, 👍❤️

You give the best reviews, much appreciated.

I always enjoy your reviews, whether they are positive or not so positive. I often taken issue when details are a little ":off".

Interesting, thoughtful review. I've never read Marc Levy, but I don't read a whole lot of contemporary fiction these days (I've probably mentioned I'm stuck in the 19th century when it comes to fiction). This doesn't sound like my cup of tea. The best historical fiction I've read by a modern novelist is Gore Vidal's stuff. _Lincoln_ is his best, I think.

I'm making a list of books/authors for my next library trip. Thanks :)

I saw this book and was curious about it. it sounds like a good read when you don't want to work to hard at the story or reading. Thanks.

I'm very keen on British history, especially immediately after the war. I read where Elizabeth had to use ration coupons to make her wedding gown. I would probably found as much fault with the book as you. So glad you reviewed it, though.

I never read these types of books as I know I will be disappointed. How did your manage to read the entire book? Thanks for your honest review.

I think I can live without this one! But thanks for the review because it sounds like something I might have otherwise picked up.