"Outside the Box" by Marc Levinson 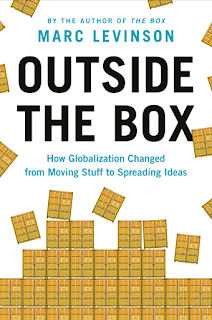 When a massive container ship blocked the Suez canal for the week of March 23-29, this year, there was a lot of talk about the blow to global manufacturing because the 200 or so waiting ships carried components from one side of the world that were needed by factories on the other side of the world. I think we are all conscious of the way vital electronics, household gadgets, cars, trucks, and industrial goods are assembled from parts that are sourced in dispersed manufacturing sites, but we don't necessarily know the details.

In the book Outside the Box: How Globalization Changed from Moving Stuff to Spreading Ideas, author Marc Levinson traces the history of internationalized sourcing of materials, as we are accustomed to thinking about it. He traces several waves of globalization that altered the production methods for goods that our lives depend on, including food, cars, iPhones, and many other commodities and products. He explains the way that shipping companies exploded the size and speed of container ships until the economies of scale were distorted, and the way that demand for their shipping services first grew and then shrunk, until now many of the ships are vastly under-utilized, and the biggest companies are in trouble. According to Levinson, a backlash against globalization has been changing many features of worldwide manufacturing and distribution endeavors.

Present-day manufacturing, Levinson explains, involves much more than just assembling parts procured through tightly-organized supply chains, as was done in the twentieth century. He traces the development of "value chains" that in the mid-20th century created a much more complex web of dependency among international manufacturers, and relied on entities in complex and loosely-organized chains. Levinson outlines the ways that this concept worked, including the major role of cheap shipping on ever-increasing container ships. He explains the benefits that derive from value chains, and also the many disadvantages -- not the least of which is a shipping incident like the one in Suez last month. Interestingly, he shows how the interdependence of factories on far-flung sources of parts has been diminishing in what he calls a "fourth wave" of globalization.

Above all, the driving force behind value chains came to be intellectual property. The design of complex products, the planning of how to build them, the calculation and negotiation of how to source their parts, and the creation of internal software for many types of modern goods means that there is often much more value from intangibles than from physical components. An important consequence is that old views of import and export surpluses and trade balances no longer illustrate the real economic impact of multiple countries' and corporations' roles in production and design. Politicians often fixate on only the physical components that may be manufactured outside their countries and their tax base, when the major value of a modern product like a car or a smart phone is in intellectual property, not in hardware. Levinson explains a great deal about the way that globalized value chains work and how this is changing right now. A new global model for manufacturing is emerging, so I guess he will be able to write a third book. (His first was called The Box, and is a history of container shipping.)

Outside the Box is a complex work of economic history. Sometimes when reading it, I felt bogged down in too much detail. Other times I just didn't feel sure I understood the big picture. Overall, it's a book worth reading. I don't feel as if I can do it justice in a review, but here are a few more thoughts.

"Any business faces risks, and supply chains inherently pose risks aplenty: fire might strike the plant of a key supplier; a problematic lock on a river might block shipments of an essential raw material; a gasoline shortage might make it difficult for production workers to reach their jobs. Once, manufacturers managed this risk by controlling their supply chains directly. The exemplar, Ford Motor Company, owned forests, mines, and a rubber plantation; transported raw materials to its factories on a company-owned railroad; and built blast furnaces, a foundry, a steel rolling mill, a glass factory, a tire plant, and even a textile plant at its vast River Rouge complex near Detroit, where sand, iron ore, and raw rubber were transformed into auto parts and assembled into Model A cars." -- Marc Levinson, Outside the Box (p. 153).

Another Way: The iPhone 3G

In contrast, Levinson has a detailed analysis of the value chain for the iPhone 3G that was sold a decade ago, as an example of how the modern manufacturing arrangements work, and how they affect international trade. In particular, he uses this example to illustrate the fallacy of simple-minded views of trade balances:

"Consider how the iPhone 3G’s complicated supply arrangements registered in merchandise trade statistics. China exported approximately $2 billion of the phones to the United States in 2009. Apple, on the other hand, exported no goods directly from the United States to China, and other US-made components shipped to the iPhone manufacturing plant were worth only $100 million or so. Thus, if either country had published official statistics covering trade in iPhone 3Gs, they would have shown China to have a $1.9 billion trade surplus with the United States. Yet in reality, the US-China relationship in iPhones tilted in the other direction. The total value that was added in China to all the iPhone 3Gs shipped to the United States in 2009, at $6.50 per phone, came to about $73 million, or less than the value of the US-made components shipped to China. Almost ten times as much of the phone’s value originated in Japan as in China, but when those iPhones were shipped from China to the United States, they did not affect the official US trade deficit with Japan at all." (p. 135).

The Anti-Globalization Backlash and its Consequences

"Is globalization over? Not by any stretch. Rather, it has entered a new stage. While globalization is retreating with respect to factory production and foreign investment, it is advancing quickly when it comes to the flow of services and ideas." (p. 224).

Outside the Box traces the development of global production, which relied on new agreements on tariffs and taxation, as well as relaxing many obstacles to exchange of goods among many nations. He describes both the advantages and the harms done by these changes in protective behavior by various governments. In his final chapters, Levinson documents how there are new barriers developing to totally free flow of goods, as well as new doubts about the reliability of long-distance transport of vital components and necessary goods. Distrust of the agreements both in developed and in developing nations has created new ways to do business. He cites major events such as the vote for Britain to exit the common market, and the election of Trump who restored a large number of tariffs and restraints on international trade. He writes:

"Around 2011, as the result of independent decisions by some of the world’s largest companies, trade patterns began to shift as multinational companies reconsidered their value chains. The effects showed up not only in export and import figures, but also in a set of obscure calculations that track the extent to which one country’s manufacturers use inputs that were imported from another country. In 2011, these OECD data show, 42 percent of the value of South Korea’s exports—things like Hyundai cars and Daewoo tanker ships—came from imported materials and components; six years later, the corresponding figure was only 30 percent. For China, imported content was 23 percent of the value of manufactured exports in 2011, but only 17 percent five years later. The United States, Great Britain, Germany, Italy, Japan, and Sweden all experienced the same trend. So did Taiwan, Indonesia, and Malaysia. There are only two likely explanations. One is that manufacturers in these countries cut back on exporting goods that used a lot of foreign inputs. The other is that they decided to obtain more of their inputs at home rather than sourcing them abroad. Either way, manufacturing became less global." (pp. 214-215).

A "fourth wave" of globalization is now in process, Levinson writes. The third wave, he says, could be called "the age of stuff;" manufacturing was the driving force. In contrast, the fourth wave is more about lifestyle choices, and reflects the aging of the population especially in developed nations, but also in the less developed parts of the globe.  For example, American fast food is vastly popular and widely sold everywhere -- even China.

"Companies in industries whose products are intangible—software, accommodation, real estate, computer services—accounted for a greater share of the largest multinational enterprises, while major industrial companies shrank under relentless competitive pressure. In the emerging Fourth Globalization, moving ideas, services, and people around the world mattered more than transporting boatloads of goods—and seemed likely to create very different sets of winners and losers." (p. 219).

The conclusion of the book takes us almost to the present moment with the question of how the Covid-19 pandemic will affect the future.

"By bringing international travel almost to a stop after airlines cancelled flights and governments directed arriving passengers to spend two weeks in quarantine, COVID-19 forced firms to manage their foreign interests without customary site visits and face-to-face meetings, and travel-weary executives may not be eager to return to the old ways even after the virus is a distant memory." (p. 227).

Levinson obviously can't predict the future, but he offers quite a lot of economic history to help envision how life may change and how it might go on with some of the same relationships and ideals among countries and within corporations. It's a difficult book to read, but very interesting.

Some factories order parts to arrive just as they are needed. The Pandemic,then Brexit and now the Suez Canal blockage have affected time lines and delivery times of finished products. This sounds like an intense read.

I was most impressed with the next to last paragraph. I suspect we will see more Zoom conferences instead of real travel, even after the pandemic is behind us. I also see us changing our ways of dealing with globalization, too. This was a very interesting post, Mae.

A very complex theme.
I was so stupid to order a skirt from China, it took over 3 months. And then it was too large. They advised me to not send it back, it would be too expensive.
And then, each time I see -saw!! - the little (also here green) truck that sells local eggs and cheese on Thursdays in the street, coming with a jingle like the ice-cream-truck back then I think, weeee, we could do it like this, go back to the old(en) days.

Not everything was bad back then.

Crazy how that ship could get stuck like that and what came along with it...

This does sound like a tough read! Great review of the overall concepts and what you took from it. I'll have to add this one to my list. Thanks!

This book sounds fascinating. I know very little about the way things or ideas get passed from place to place, and it sounds like this book would be very good at explaining the way it works now.

The book probably has more detail than I’m interested in, but thanks for sharing your summary

This book sounds interesting. The next to last paragraph was something I hadn't even thought about!