“The Book of Eels” 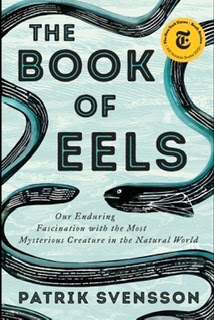 Patrik Svensson’s work The Book of Eels is one of those wonderful meditations that has a very narrow focus on a single topic, but actually covers a whole world of topics. Eel fishing played a big role in the author’s childhood. The study of eels, which he documents in a very interesting way, has been a huge challenge to science. And eels, it seems, may be among the most endangered of species on earth.
“There’s a special providence in the fall of a sparrow,” said Hamlet. Svensson makes his readers feel this way about eels. So it’s a remarkable book: also very popular.
Certain stages of the life cycle of the eel have eluded scientific observers. Svensson describes the scientists who tried, and failed, to find the exact location of eel spawning grounds, to observe the earliest stages of eel life, or to obtain fully mature, breeding eels. And thus he considers the world of science and scientific endeavor. He begins with Aristotle, the first scientist, who wrote about eels among many things. Svensson continues with sketches of the work of a number of others who sought to understand eel behavior, including quite recent efforts. Beyond science, Svensson includes a detailed description of descriptions of eels in several works of literature, where they can become a powerful metaphor or symbol.
Svensson compares Swedish traditional methods to eel fishing in other times and places. The constantly diminishing eel populations of his own region, and many other regions, lead the author to a discussion of how eels are so severely endangered that they may soon go extinct — and this thought is embedded in consideration of the whole endangered world today. Svensson does all this seamlessly. As I read I never felt as if the transition from the tiny specific topic to the broader view was forced in any way.
On the personal level, Svensson describes the way that he and his father fished for eels throughout his childhood and youth, and his father loved to eat them cooked in a variety of ways -- though Svensson himself was not as fond of them. Through this personal example, he illustrates many thoughts about his life. The father's way of eel fishing belongs to the traditions of eel fishing history in his native region: Skåne, Sweden. The eel and these traditions provide a powerful connection to his father, a road-builder, especially after he, the son, becomes a university-educated writer and very different from his family. Finally, as he describes his father’s death, the book becomes a meditation on death itself, on all that we cannot understand.
Eels are fascinating and mysterious. Scientists have searched in vain in the Sargasso Sea where their breeding grounds are thought to be located, but have never found exactly where the eggs are laid and hatched. The eel becomes for Svensson an embodiment of the uncanny, of the things that can’t be understood, and that don’t fit one’s ordinary definition of living reality.

“THERE ARE CIRCUMSTANCES THAT FORCE YOU TO CHOOSE WHAT TO believe, and for as long as I can remember, I’ve been the kind of person who chooses to believe what people consider verifiable, science over religion, the rational over the transcendental. But the eel makes that difficult. For anyone who has seen an eel die and then come back to life, rationality isn’t enough. Almost everything can be explained; we can discuss different processes of oxygenation and metabolism or the eel’s protective secretion or its highly adapted gills. But on the other hand, I’ve seen it with my own eyes. I’m a witness. An eel can die and live once again. ‘They’re odd, eels,’ Dad would say. And he always seemed mildly delighted...” (p. 192)

Eels have provided food for many people who live near the streams and rivers where they live; Svensson documents many eel fishing and culinary traditions. Though their popularity has declined in Europe and in the US in the past century, they were once very important. For example, did you know that eels were a critical source of nutrition during the near-starvation year of the Pilgrims at Plymouth, Massachusetts? That their Indian guide (incorrectly known as Squanto) showed them how to fish for eels?

"For some reason, this gift from God to the early pilgrims has been all but erased from the grand narrative. The story of the colonization of North America is full of myths and legends, but the story of the eel isn’t one of them. On Thanksgiving, Americans eat turkey, not eel, and other animals—buffalo, eagles, horses—have been the ones to shoulder the symbolic weight of the patriotic narrative of the United States of America." (p. 104).

By now, eels are so endangered that it’s objectionable to eat them, though I’ve always liked the eel sushi that is served at many Japanese restaurants (but would be reluctant to eat it any more); I believe I also once ate eel in the Loire region of France, where it is also fished. One passage about eating eels especially interested me; it’s about the very young eels who will later transform into the more familiar snake-like fish. They are called glass eels, and in places where they are found, they are a delicacy:

“In Italy, glass eels used to be caught in the Arno River in the west and around Comacchio in the east. There the preferred way of serving them was boiled in tomato sauce with a sprinkle of parmesan. ...These days, however, it’s a dying tradition. As the number of glass eels wandering up Europe’s rivers has plummeted, the fishing industry built around them has also ceased to exist.” (p. 90)

Here’s why I loved this passage: we once stayed in a hotel in the vicinity of Comacchio, and we went to a highly recommended restaurant where I remember eating a dish of glass eels (though I thought they had said grass eels and just found out that this was wrong). The eels on my plate were indeed very small and exotic, but I liked the dish. I don’t think in fact that they were in tomato sauce. It was long ago, before I carried a camera with me at all times, so I have no tangible evidence of this meal, only an indistinct memory. As eels become more and more endangered, it’s likely that this dish will no longer be prepared, and in any case it’s become very expensive, so I doubt if I will ever taste it again.

To quote another poet besides Shakespeare (after all, it’s National Poetry Month) —

I read this book. It was interesting. I particulary love the relationship between the dad and the son, and how complex it actually was.

Interesting post. I realize that I know nothing about eels.

I would never think of eels. All I know is that I'm never fond of them in sushi. This book, though, reminds me in a way of Elisabeth Townsend's book on the lobster.

I was unaware that eels were endangered. I too will add them to my list of food I won't buy. Not that we get them here, nor are we travelling to Europe anytime soon.

Sounds like an interesting book, thanks for the review. I am not sure if I would want to eat eel, I have seen a heron eating an eel. Thank you for linking up and sharing your post. Take care, enjoy your day! Happy Weekend! PS, thank you for leaving me a comment.

The so called most mysterious creature is still a mystery to me. Reading this book should help.

I didn't realize eels were endangered. No more eel sushi for me anymore either. Thanks for the info.