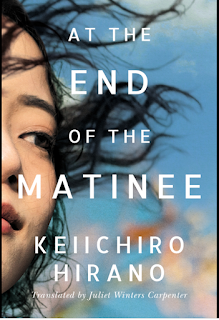 In Keiichiro Hirano's novel At the End of the Matinee, the author seems to get inside the head of a musician, specifically a very skilled classical guitarist named Satoshi Makino. Communicating what music means to an accomplished performer is a challenging thing to do. As I read the passages about Makino's musical sense, I felt the way I do when natural history writers talk about how a human can’t get into the head of another species like a swan that can fly and feels no cold in icy water, or a songbird that can remember where it hid some hundreds of seeds and nuts for winter, or a bat that hears shapes and obstacles to its flight.

Creating music is simply not in my head. So I have collected some of Hirano's quotes that struck me. Consider this paragraph:

"Musical depth and breadth. Richness that rewarded repeated hearings and a sudden radiance that captivated listeners the very first time. Relief from humankind’s most pressing psychological afflictions and a friendly invitation to capriciousness. Spiritual liberation and day-to-day solace. Maintaining these contradictory impulses, an obsession of contemporary musicians, was a task that Makino had set himself over the past few years. In that regard he was achieving more than any other guitarist. His pride accepted this, and yet he felt an obscure, overpowering anxiety." (p. 33).

A woman, Yoko, who falls in love with him reacts to his gift this way:

“His gift is like . . . a paper airplane that God folded and let fly just for fun. It appeared high in the heavens one day and just keeps on going, flying and flying and never falling to earth. The line it traces is a thing of beauty.” (p. 44).

Makino expresses his thoughts on Bach:

“I always wonder, How well do I really understand Bach, the core of European music? When I play a period instrument, I feel it all the more. To reach the understanding you just came to as easily as if you were jumping over a puddle, I’d have to spend years building a bridge over a deep valley. That’s what I can’t help admiring. That cultural depth, for lack of a better word.... After nineteenth-century Romanticism, the emotional or sensory aspects of music are more approachable, but so much in Bach transcends Bach the man. The existence of God, the lineage of the Bach family . . .” (p. 80).

Or his words to the staff of his recording studio, who want him to rush his preparation for a performance after he had been away from playing for a number of months:

“If I were a jazz guitarist, say, someone who ad-libbed onstage, it’d be different. But I’m from the world of classical music. I can’t make adjustments while I’m playing. A figure skater having an off day can downgrade his performance from a triple axel to a double, but I can’t do anything like that. You’ve got to understand.” (p. 213).

And during a performance of great importance to him:

At the End of the Matinee is an interesting novel: mostly it's a love story, with several complex and very thoughtful individuals at its center -- mainly the guitarist Makino and Yoko, the love of his life. There are many conversations between the two of them and also with several other important characters, conversations that are often described in terms of their interior thoughts rather than by quoting exactly what was said. As a result, it's a very intense emotional novel, maybe a little hard to take.

The contemporary world from 2007 until 2012, the time of the book's action, is a major part of the interior thoughts of the main characters. Important themes in the book: the ongoing war in Iraq, memory of the brutal wars of the twentieth century, the tragedy of refugees and those who were murdered by one government or another, and the brutal fear after the Japanese earthquake-tsunami-nuclear meltdown. Their depressing and threatening nature permeates the book.

This is the second book I've read in amazon.com's free offer of international books: At the End of the Matinee has a lot of appeal in several ways. It's hard to read, but pretty much worth the effort.

It is a gift.
Freddie Mercury created "Crazy little thing called love" in but 10 minutes. Sitting in the bath tub (I read ;-)...)
I don´t like that song but it represents what musicians can to to untertain us, sometimes with a short idea flying by.
My brain sadly does not work like that...

I'm so glad to read this review. It's so lovely to download free books...unless they are terribly disappointing. Glad this did not disappoint.

Such a different aspect from your usual reviews. Have a great weekend Mae

I meant to check out the selection for World Book Day but forgot to. I feel so overwhelmed by my own TBR pile I'm not sure I really should be adding to it right now any ways. But I'm glad you found one to enjoy. Check out what I read this month.

I completely forgot about the world book day selections. So glad for you that you found this one! Lovely review.

Have a good week ahead!

I start having trouble when I read "love story." It sounds rather different and, in some ways, quite sad. I did enjoy the review, though.

I downloaded this and most of the other options for World Book Day. I'm glad to read that you mostly liked it.