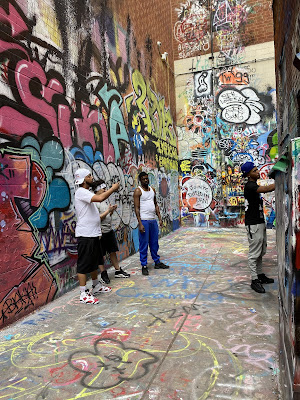 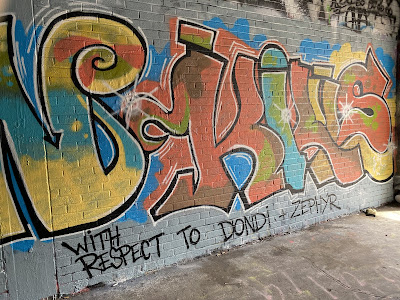 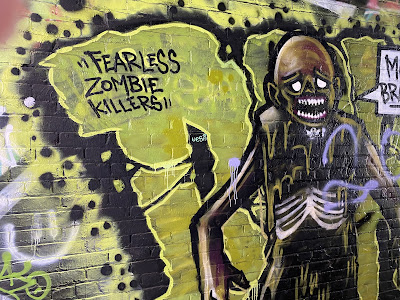 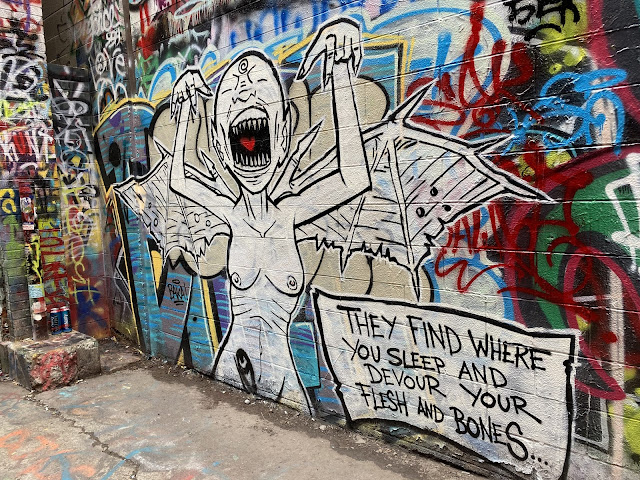 Here's an amusing story from ArtNet News: "A Couple Accidentally Defaced a $500,000 Painting in a Seoul Mall After Mistaking It for a Participatory Artwork" --

"A couple visiting a street art exhibition at a mall in Seoul unknowingly vandalized an abstract painting by American artist JonOne, said to be worth $500,000, painting three large dark splotches across its surface.

"The couple were confused by the array of brushes and paint tubes scattered on the ground beneath the canvas. They were meant to reflect the creative process of the artist, but the unwitting pair mistook the display for an invitation to add to the work."

The artist is "known for his Abstract Expressionist-style graffiti." I find this extremely funny! Especially as the $500,000 work of art looks to me just like the ones in Graffiti Alley, except that it's normal to paint over the walls in Graffiti Alley. I was happy to learn that the couple who painted on the mural were not charged with a crime.
Here's a before-and-after photo of the 23 by 9 foot painting:

The Murals of El Paso, Texas

The New York Times recently published a fascinating feature about the murals in El Paso: "Art Without Borders" by Diana Spechler. If you are fascinated by murals and street art, as I am, you will surely enjoy the detailed descriptions of the artists and their goals in painting murals with topics such as racial justice, immigration from Mexico, local history and communities, and more.
The paintings in El Paso reflect many trends, especially the Mexican muralism movement of the 1920s and 1930s. This movement, the author writes, "gave us some of the most important art of the 20th century, most notably from 'the Three Greats:' Diego Rivera (otherwise known as Frida Kahlo’s husband), José Clemente Orozco (a master painter despite losing a hand to gangrene) and David Alfaro Siqueiros (who once dismissed easel painting as 'aristocratic,' mentored Jackson Pollock in New York City and is said to have tried to murder Trotsky, but that’s another story for another time)."
The photographs of murals and of their artists in the article are especially interesting, and use a sort of animated technique to interpret various parts of each mural.

Wow, those graffiti look amazing and very interesting. I am always amazed about the creativity.

Here is a very nice series of pictures on this graffiti alley. We also have some places like that in Paris. And especially in the suburbs. But they are places in the process of gentrification and they are going to disappear sooner or later

It took me awhile to find the three dots, but I think it added to the piece. I enjoyed the way your town sets aside an area for graffiti artists, so other art doesn't get tagged.

The graffiti alley sounds like a great way to encourage this form of art. I cannot see the difference in the mural in Korea. BTW, it's mask wearing not compulsory where you live?

An explosion of art.

This is a very happy, cool post!
I like how the small guy can lean on the big "Bro"s... They are all champs!
Coolest pic (sorry, but they just beat the art!)

We have a graffiti alley too, in Toronto’s Kensington Market area! We haven’t been able to casually walk around for over a year and now we’re in our third lockdown! Can’t wait to get back to normal.
Eva http://kitcheninspirations.wordpress.com/

The artists certainly look like they were having fun painting all those ever evolving murals.
The story about the Korean piece of art was funny :)
Thanks for participating in Monday Murals Mae.

So appropriate that you ventured to Liberty St out of lockdown, Mae! And you caught the artists at work - what fun!

A graffiti alley sounds like a wonderful idea, an invitation to be creative in public. Fun! What a shock that must've been to the couple who thought the display they found was an invitation only to find out otherwise. I'd never heard of the El Paso murals. Interesting.