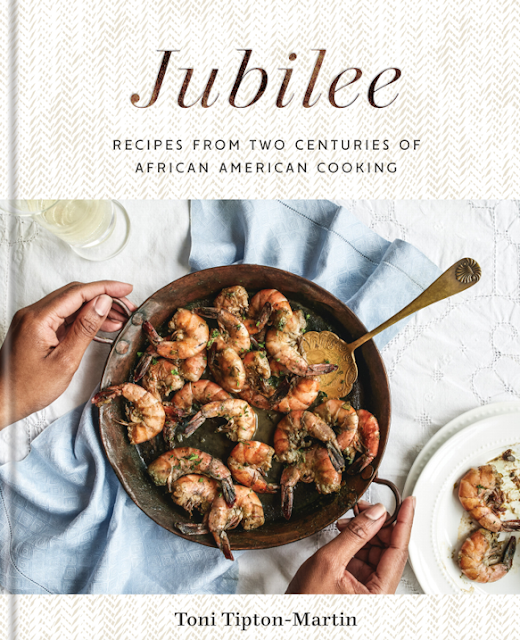 Let’s celebrate the great contribution of Black Americans to the many cuisines of our country. In 2015, author Toni Tipton-Martin collected over 400 Black-authored cookbooks from more than two centuries of American food ways, and wrote a book documenting them: The Jemima Code: Two Centuries of African American Cookbooks.
In Jubilee: Recipes from Two Centuries of African-American Cooking, published in 2019, Tipton-Martin presents recipes that she found in her collection of books by Black cooks, along with their role in American culinary life. Tipton-Martin's history of Black American cuisine begins with the African sources, and continues with much more. She incorporates narratives of Black lives from sources like the Federal Writers’ Project (1935-1940), published memoirs and letters, and historic slave narratives from the 19th century.
For the recipes in Jubilee, Tipton-Martin uses mainly Black sources for her recipes, which she explains thus:

"A common refrain in historic cookbooks about rather than by black cooks is that these cooks made delicious food through some kind of mystical power, an innate talent, rather than through honed skills and hard work. It’s a stereotype that, while on the surface complimentary, only served to pigeonhole and limit black cooks by declaring them inscrutable and denying them their earned wisdom and abilities to adapt, learn, and create." (p. 128).

The recipes in Jubilee come from many regions of the country, including California, the Southwest, and the urban North. One of her sources is a collection of "recipes and remembrances from three historically black colleges: Alabama’s renowned Tuskegee Institute, the Hampton Institute in Virginia, and Howard University in Washington, DC." (p. 112). Tipton-Martin cites recipes with an origin in the Caribbean, as well as the expected recipes and food ways from the South and the special cuisine of New Orleans. Food customs and recipes from middle-class writers, owners of restaurants and other food professionals, and well-off homes figure in this broad view, not just the foods of poor people. In sum: it's "not just Southern cooking or the soul food African Americans are known for and pigeonholed in, but immensely broad culinary interests and recipes." (p. 9).
Tipton-Martin is one of the most upbeat writers that I have read, and I love the way she presents the material, concentrating on one general type of recipe at a time. For example, the introduction to the chapter of recipes for biscuits, breads, and other such products credits a number of cooks, the books they wrote, and the history of these baked goods, concluding:

“With so much knowledge and experience in the community, it’s no surprise that black inventors developed ways to turn out perfect loaves, rolls, muffins, and cakes without all the strenuous and time-consuming effort. In 1875, Alexander P. Ashbourne devised a spring-loaded die cutter that cut biscuits into a variety of thin, uniform shapes. Two years later, Joseph Lee, known as the ‘bread specialist,’ designed a bread crumb machine to reuse stale bread. In 1884, Willis Johnson of Cincinnati patented an improved mechanical egg beater with two chambers that allowed a cook to beat eggs in one section and mix batter in the other, and Judy Reed patented a hand-operated dough kneader and roller. And in the mid-twentieth century, Lucille Bishop Smith, a chef, home economist, entrepreneur, and author, developed and sold the first packaged hot roll mix—a commercial product that was a boon to housewives. ...
“Distinctively endowed. Professionally grounded. Supremely industrious. The recipes in this chapter memorialize these innovators as role models, equipped as they were with an inheritance from ancestors who fashioned flatware from oyster shells, carved mortars and pestles from tree logs, sewed baskets for winnowing rice using bones and sweetgrass, burned corncobs to make baking soda, and distilled salt from the soil under a smokehouse.” (p. 83)

Besides the fascinating documentation of this history, the recipes look scrumptious. Along with her own, modernized recipes, the author provides old recipes in their original format, to allow you to compare and judge what the historic version would have been like -- or to cook the original, if you wish. In addition, the illustrations are beautiful. Here is an example: Rice Muffins, a recipe belonging to the rice-growing tradition of South Carolina, from the chapter on bread and baked goods:

Tipton-Martin never forgets the terrible elements of Black American history: the forced voyages, cruel family separations, abuse, and especially the misuse of women slaves. She is aware of the racism, economic injustice, social injustice, and cruel treatment of Black Americans in the centuries since the abolition of slavery. The frequent choice of slave owners or later of employers to take credit for their Black slaves or employees' work is a painful one; by giving credit to the Black professional cooks and restaurant workers, as well as family cooks who wrote their own cookbooks or left recipes to their families, Tipton-Martin in a sense is making up for these practices.
Jubilee often presents evidence of how individuals struggled against these evils, especially pointing out how employment as cooks, caterers, restaurant owners, railroad dining-car staff, and other food-service workers could create opportunities for Black Americans to improve their situation. She writes:

"Service workers who had fought for social status during the post–Civil War years by continuing to work in 'every day' careers gradually moved into the privileged class. Culinary arts helped them resist illiterate servant stereotypes, such as Mammy and Aunt Jemima, the way that the creative, visual, musical, theatrical, and cultural arts promoted notions of the 'New Negro' during the Harlem Renaissance." (p. 122).

"And while the pain of enslavement reverberates for centuries, and through the centuries, too, black bakers have used their skills and savvy to create wealth, self-sufficiency, and generations of protégés to carry on their legacy and to build their own economic power." (p. 263).

Finally, I want to emphasize the appeal of the recipes in this book! I have not made any yet, but I love some of the ideas like the Savanah pickled shrimp, sweet potato salad, bread pudding, okra dishes, jambalaya, and many more. I'll end with a very intriguing tradition that I am sure I'll never have the nerve to try:

“Bake a sweet potato pie, a coconut pie, a custard pie, a mincemeat pie, and an apple pie. After removing from pie plate, stack each pie on top of each other. Press the stack gently, then cut into thin wedges so that everyone gets a taste of each pie.”  (p. 303, quoted from author Charlemae Rollinsee)

Please share the recipe for okra. For the first time ever I've seen it available here. I love reading old recipes. Thank you for sharing this review.

I want to try those rice muffins!

Slavery is such a stain on our society. We should feel shame, but many are bringing it back again in the form of police brutality and racial slurs we here daily.

This sounds like a good read, and she has certainly pointed out many of the issues blacks have faced over the centuries. She even brings up many good points, too. At least you do in her quotes and your review.

I really want to try that pie. I'd replace the apple with cherry, though.

Sounds like some good recipes. I like the last part about pies since I really am more of a baker. Thanks for sharing.

I've got this on my cookbook shelf and have been pleased with every recipe I've made from it.

Food history is always so interesting, and this book sounds even more so given that it also reflects on social history and injustices as well. Thanks for sharing.

I very much like a cookbook and memoir combo. It’s good the history & family stories are preserved here. I’ll check this out at the library.
Love some of the foods you listed such as jambalaya, muffins, anything sweet potato!

What a fascinating idea for a cookbook. I'm sure with all the contributors and background the recipes must be wonderful. It's a book I would love to see and look into. thanks Mae.

Wow this is a fabulous post. So much information and wonderful recipes.