Kefir used to be an exotic drink, but it's now available in most supermarkets, at least where I shop. It was popularized in the US by the Lifeway company, beginning in 1986, but now is made by a number of brands. Kefir's origins are in Russia and several other countries in the East (for more history see the Wikipedia article). 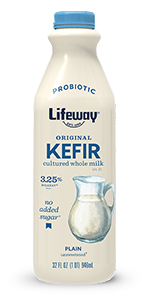 For some time, Len and I have been enjoying this yogurt-like beverage. We also like other fermented milk products such as yogurt, buttermilk, sour cream, and many types of cheese -- a large family of foods that vary widely in taste and in how they are used in many different recipes.
Micro-organisms, including yeast and lacto-bacillus, promote the fermentation that creates these distinctive products. These organisms have been found to confer at least some health benefits on people who consume them in sufficient quantities. Kefir, which is very rich in these organisms, is especially healthful.

The yeasts and bacteria in the cultures for each type of fermented dairy product are related to one-another, but not all the same. The processes for making them, such as the temperature and length of time for fermentation, also differ among the products, whether at home or in an industrial setting. Like sourdough starters for fermenting bread, you can buy commercial starters for home-made cultured milk products.

SCOBY is the name for these starter cultures. I thought it was a cute pet name but it's actually an acronym: "symbiotic culture of bacteria and yeast." When you make yogurt or sour cream, you can save out some of the product to use as the starter for the next batch. Kefir is a little different.

The starter for traditional kefir-making, which is what you would use if you wanted to make it at home for yourself, is made up of a cluster of fermentation-starter grains that are described as looking like cauliflower.
Here is a highly technical description of kefir and kefir grains:

"Kefir is a complex fermented dairy product created through the symbiotic fermentation of milk by lactic acid bacteria and yeasts contained within an exopolysaccharide and protein complex called a kefir grain. ... The beverage itself typically has a slightly viscous texture with tart and acidic flavor, low levels of alcohol, and in some cases slight carbonation. Kefir is traditionally made with cow’s milk but it can be made with milk from other sources such as goat, sheep, buffalo, or soy milk. One of the features that distinguish kefir from many other fermented dairy products is the requirement for the presence of a kefir grain in fermentation and the presence and importance of a large population of yeasts. The aforementioned kefir grains are microbially derived protein and polysaccharide matrices that contain a community of bacterial and fungal species that are essential to kefir fermentation. Traditionally, fermentation was initiated through the addition of kefir grains, which originally formed during the fermentation of milk, to unfermented milk in a sheep or goat skin bag. Commercial, industrial-scale production rarely utilizes kefir grains for fermentation, but rather uses starter cultures of microbes that have been isolated from kefir or kefir grains in order to provide more consistent products." (quote from: The Microbiota and Health Promoting Characteristics of the Fermented Beverage Kefir.)

Making kefir at home appears to be a bit challenging. Theoretically when you are using kefir grains to make the product, you can retrieve some of the grains each time you make a new batch, but it's difficult to do so consistently. However, some people find it less difficult and demanding than others.
In order to keep kefir grains going, you could find it necessary to make new kefir every day. This might be more than you want, but if you don’t do it often enough, the grains can become less effective. Thus you might need to purchase starter for kefir more often than you would purchase the starter for yogurt. Alternately, there are freeze-dried kefir starters available that may be easier to use. I have never made kefir, so I can't offer much help with this.
I'll just mention that appropriate SCOBYs are used to make fermented foods from other liquids as well as from dairy milk. For example, kombucha, soy-milk yogurt or kefir, and water kefir are non-dairy fermented foods from similar cultures. 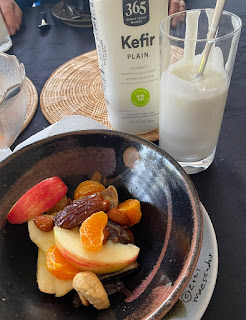 Fermented milk products like yogurt and kefir are familiar in America today. Though very little known here before the 1960s, beginning with yogurt they have become steadily more popular over the years. I enjoy drinking kefir (sometimes with sugar) or eating it with granola or fruit. Over the years, I've also tried a number of recipes using kefir, including chocolate cake and frosting, "buttermilk" brined chicken, sourdough-discard pancakes, kefir-based salad dressings, kefir smoothies, and more. Kefir is considered a good substitute for buttermilk, and recently I have used it in baking when buttermilk is called for. The website Serious Eats kitchen-tested several buttermilk substitutes for making biscuits, and found that kefir was by far the best (link -- kefir is the last one discussed in the article). My mother's favorite buttermilk sub was milk + lemon juice -- this popular choice was rated as the worst option by Serious Eats.
Once again, I'm sharing my thoughts on a beverage with the bloggers who join Elizabeth at the blog Altered Book Lover each week. This blog post is copyright © 2021 by mae's food blog.
Posted by Mae Travels at 7:00 AM

I like both water and milk kefir. Wish I had patience and skill to make them myself at home.

I not only learned a new word, I learned a new product and process. I've never heard of Kefir before, but I LOVE buttermilk. I really enjoyed reading about its making and its history. This was truly an interesting post, Mae. I can always leave it to you to find the most unusual T Tuesday posts. Thanks for introducing me to Kefir for T this week, dear.

Thank you for this! I have been so tempted to buy Kefir just to taste it as I know it's becoming more available and popular yet I knew nothing about it. Will let you know if I do get some;) Happy T day!

I used to make it all the time and kept it going for about 2 years, but found I could not consume it as fast as I was making it. I ditched my grains and kombucha scoby at the same time. I kind of wish I had kept the kombucha going. Maybe another time!

I love kefir cheese. I was making it a few years ago before I went dairy free. I wish it worked with coconut milk.
Happy Tea Day,
Kate

This is really interesting. Kefir is such a tasty drink, especially the fruit flavored ones. It doesn't sound that easy to make though. And scoby would be a good name for my sourdough, because I agree, it is a cute name, even if it is a very descriptive acronym. Hope you have a super T day Mae.

i went to a workshop once where they made kefir and similar foods. i think that was the first i'd heard of it. very good for your gut i hear!

I really wish we could buy this ready made here. It's am ingredient I would love to try.

A colleague once gave me the organisms (we call them "Mushrooms") to make kefir myself.
Worked, but was icky, LOL.
He said it´s healthy and from time to time I try it. From the store now...
But it was fascinating to watch it grow!
SCOBY, awww cute!
Now I regret I gave up on them!
Yes, cauliflower, THAT´s what it looked like. It was easy-peasy to make!
Smoothies, good idea.

I love kefir, yogurt and co! I remember my great aunt making it when I was a kid. Happy T Day, Valerie

Mae your post was very interesting, I've never seen Kefir over here although maybe I've never looked for it, we have the probiotic drinks every day, not sure if they help but it's worth a try.
I think making it would be too complicated for me.
Have a Happy T Day
Jan S

Can you believe I have never heard of kefir? I am going to look for it in the grocery store and try it. Very interesting post! TFS!!!!

I had heard of Kefir but hadn't realized what it was. I grew up in the 50s in Holland and we had yoghurt and buttermilk and we also had kefir, which we called drinking yoghurt. We called the culture a yoghurt plant. It grew as you continued to use it and when it got too big you gave it to a friend because as you say, sometimes they become less effective and you need 'new blood. I was still making yoghurt that way when my son was little (in the late seventies), but then I moved to Italy and that all went by the way side. I so missed yoghurt and sour cream and buttermilk etc.
I think I have seen Kefir in the shops here too. (Only I didn't know what it was)
Last summer I have made Kombucha successfully all through the summer (It was too cold in the winter) and my scoby has not survived. So I hope I can buy another one online. Most scobies come from the UK, which is out of bounds for us since they have left Europe.
I also have an ongoing 'Herman', a type of sweet sourdough to make cakes. As yet I have not mastered a proper bread sourdough. I think I need organic flour and that is difficult to find here.
Thank you for your most informative post. It certainly took me back to childhood. Lol.
Have a lovely T-Day,
Hugs,
Lisca

I have never had Kefir, but have seen it in the grocery store. I like yogurt and tried making that myself, but decided in the end the process wasn't for me so I buy plain Greek yogurt. Your blogposts are also so interesting and I enjoy reading them. Take care and have a Happy T Day

Fascinating! I don't drink milk-based beverages, but I eat yoghurt all the time. As a substitute for milk and buttermilk in cooking it's got great possibilities. Happy T Tuesday!

So interesting! I always make the buttermilk substitute when I need it for my baking as it's now readily available here 😁. Happy T Day wishes! Hugs, Jo x

We like Kefir as a drink or yogurt but didn't know much about how it is made. I think we'll continue to get ours from the supermarket! Happy T day, Chrisx

I e never had kefir, but I’ve always been wanting to try it, you’ve really made it so much more doable for me lol, thank you for that,

I've bought kefir, we use it mostly for cooking.

Great post! I used to drink and use a lot of kefir but it's been a while. Your post makes me want to grab some at the store today. ;-)

I’ve never had kefir but I enjoyed reading about the background & history here.

Fascinating! I had never heard of kefir let alone tried it.