Amber Ruffin and Lacey Lamar Teach Us a Lesson 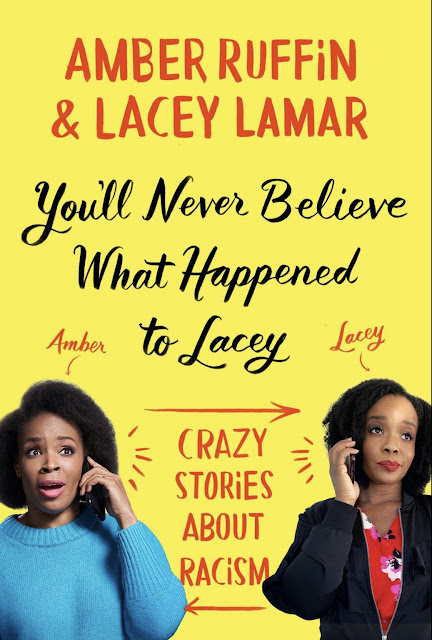 You’ll Never  Believe What Happened to Lacey is a serious book about racism in America. It relates stories of racist behavior, which are presented as “funny.” But they aren’t funny. They are painful. If you like to see other people insulted, humiliated, threatened, terrorized, belittled, and deprived of opportunities then I feel sorry for you. And maybe you’ll find this book funny. I can’t find it funny. It hurts me to read it. And I believe that every word is true.

I respect the authors for their effort to clarify racism, while trying to lead sane lives in the face of such evil. I respect their way of laughing at adversity. They can’t even experience laughter through tears (see the quote below for why no tears). Here are some serious quotes from the book:

“As we have learned, sometimes something racist happens to you and you don’t do a thing. You let people drown to death in a pool of racist thoughts and actions, as is your god-given right. You are only one person. You are not the Black ambassador to the United States. If people haven’t figured it out, it’s their problem. And sometimes you stand up and explain why they shouldn’t be doing or saying whatever insane thing they said.” (p. 100)

“I never tell white people that story because they can’t frigging stand hearing it. Honestly, they look like they’re in pain as they’re listening to me tell it and are annoyed that they have to carry this information around with them. I have never been able to understand why white people have such a low tolerance for hearing about racism. I mean, we have to live it! The least you could do is nod your head. The previous and the following are just two of the many reasons why Black people don’t want to talk about race with you.” (p. 124)

“A quick note about white tears: Why? Why do they work so well? It’s truly a great defense against being called a racist. I mean, it doesn’t work for Black people. Can you imagine if Black people cried every time we were called a name? Every time we were accused of something we didn’t do? Tell you what, I would be carrying around tissues at all times (not just when I go see musicals). I think, when a white person accused of racism cries, people think, Oh no. I need to fix this. White people shouldn’t cry. They should never have to cry! I think when white people see white people cry, they relate and feel sorry for them. And when white people see Black people cry, they can’t relate. Even though Black people have a billion things to cry about. Maybe it just boils down to the fact that white vulnerability is valuable and Black vulnerability puts the Black person in danger.” (p. 148)

“...this is real life and it does not stop. These stories only reaffirm where we are. They don’t shine a light on anything new.” (p. 202)

I agree, these things can't be funny, it's the same with sexism. When you experience it every day, when you know how much it hurts, you can't laugh about it. I hope this world will improve ?...

Haven't heard of this book -- sounds really good. Painful, but good. Thanks.

This may be even more relevant today than a year ago. We are seeing racism rear its ugly head at the expense of blacks being persecuted by COPS. I've about had it with police thinking they can prove how superior they are because they carry a badge. This was a painful story to read and I personally didn't think ANY of it was funny or even fun for that matter. Thanks for the honest review.

This is such an awful issue, world wide. Racism is so ugly and intolerable.