"A Long Petal of the Sea," Review Part 2

During the Spanish Civil War in 1938, the fascists, illegitimately trying to overthrow the recently-elected government, made sure that everyone suffered from shortages of food and other goods. They especially punished everyone in the Republican strongholds that were defending the legitimate government. These hardships are described through the lives of characters in A Long Petal of the Sea by Isabel Allende, which I reviewed in detail in my previous blog post here.

In this post I want to explore the way that Allende uses food descriptions to highlight the experiences of her characters. In addition, I am including a few photos I found that were taken during the war and its aftermath; these are not illustrations from the book, but ones that interested me.

As the novel begins, the character Roser, and her adoptive parents the Dalmaus, were struggling to find food at their home in Barcelona while Victor Dalmau and his brother were serving in the Republican army at different locations in Catalonia. The first chapters in the book depict the deteriorating conditions in the city and on the battlefields. At this time, Roser worked in a bakery near the family home in Barcelona where she was paid in bread. The family also managed to stand in line or struggle for a few additional provisions:


"Rations of lentils had been reduced to half a cup per person per day; there were no cats or pigeons left for stews. Roser’s bread was a dark, heavy block that smelled of sawdust; oil had become a luxury item, and was mixed with engine oil to make it go further. Many people grew vegetables in their bathtubs or on their balconies. Family heirlooms and jewels were traded for potatoes and rice." (A Long Petal of the Sea, p. 42).

As Roser and the family dealt with these shortages, Allende changes the scene to the luxury ship where a family from the Chilean upper class were traveling to Europe. They planned a long vacation combined with business -- the author presents their indulgent life on the voyage in contrast to life during the Spanish Civil War. Here's a daily vignette of life on shipboard, as experienced by Laura, the spoiled wife, whose only worry is that she's getting to fat to wear her evening gowns:


"Although the Reina del Pacifico could not compete in terms of luxury with the Normandie, it was more than adequate. Laura took breakfast in bed, then dressed around ten for Mass in the chapel, after which she went to get some fresh air on the top deck in the chaise longue reserved for her, where a waiter brought her oxtail broth and bread rolls. From there she went in for lunch, which consisted of at least four courses, and soon it was time for high tea, with sandwiches and cakes. She barely had time to take a nap and play a few rounds of canasta before she had to dress for cocktails and dinner ...While the orchestra took a break, the passengers were served a midnight snack of foie gras, caviar, champagne, and desserts. She abstained from the first three, but couldn’t resist the sweets. The previous night the chef, a gargantuan Frenchman, had served up an orgy of chocolate in different shapes, crowned with an ingenious fountain that spouted melted chocolate from the mouth of a crystal fish." (pp. 90-91).

Back in Spain, as Franco defeated more and more Republican forces, deprivation was the lot of his victims, sent to prisoner of war camps. The former soldiers tried to maintain discipline despite the appalling conditions:


"They divided the camp into streets with poetic names, outlined absurd squares and ramblas like those in Barcelona in the sand and mud, created the illusion of an orchestra without instruments to perform classical and popular music, and restaurants with invisible food that the cooks described in great detail while the others savored the tastes with their eyes closed." (p. 122).

Victor Dalmau, imprisoned in this camp, remained dedicated to helping those in need of medical attention; he "was as skinny and weak as the rest of the men in the camp, but didn’t feel hungry, and more than once gave his ration of dried cod to someone else. His comrades said he must have been eating sand." (pp. 123-124).

After the final victory of Franco and his forces, the persecution of Republicans and their sympathizers was ruthless. Allende's narrative poignantly describes the terrible plight of these victims as they were driven from their homes in Madrid and Catalonia, deprived of all their possessions, and desperately seeking a place to go. Many ended up crossing the border into France where they were forced into concentration camps unless someone would take them in.

Some of the Spanish refugees, including Victor and Roser, were eventually allowed to board a special ship bound for Chile, where they were to be given a place to live and work. On board this ship, life contrasts to the opulent life on the luxury vessel, as well as being a complete change from the utterly deprived life in the camps:


"Coming, as most of the passengers did, from wretched conditions and near starvation, they thought this was paradise: they had not had a hot meal in months. On the boat the food was very simple but tasty, and they could have second helpings of as many vegetables as they liked." (p. 138).

At the end of the voyage, Victor and Roser settled in Santiago, Chile. Needing a means to make a living, and they decided to start a tavern where Spanish refugees could feel at home, and where they would introduce local people to the customs of Catalonia:


"They found a cook capable of preparing Catalan sausages with diced eggplant, anchovies and squid with garlic, tuna with tomato, and other delicacies from the old country, and soon had a faithful clientele of Spanish immigrants." (p. 172).

Again the details of food contribute to the well-rounded descriptions that Allende supplies throughout the novel. I want to share one final food scene: the way that Victor celebrated his birthdays at the end of his life with Roser, after they had returned from exile in Venezuela and resumed life in Chile:


"In honor of this sentimental legacy, the day before his birthday he would go down to the Mercado Central in search of the ingredients for the fumet, and fresh squid for the rice. Catalan through and through, Roser used to say. She herself never collaborated in the homespun creation of this festive dinner, instead contributing a piano recital from the living room or sitting on a kitchen stool to read Victor verses from Neruda, often an ode with a marine flavor, such as in Chile’s tempestuous sea lives the pink conger, that giant eel with snow-white flesh. It was pointless for Victor to inform her time and again that the dish in question didn’t contain conger, the king of aristocratic dinner tables, but the humble fish heads and tails of a proletarian soup. Or while Victor fried the onion and pepper in olive oil, then added the peeled and sliced squid, cloves of garlic, a few chopped tomatoes, and the rice, ending with hot stock that was black with squid ink and the obligatory fresh bay leaf, she would share gossip with him in Catalan in order to refresh their mother tongue, grown rusty from all their wanderings." 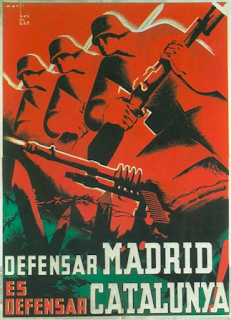 You do actual book reviews! I note books I read on my blog but have not attempted actual reviews. I admire people able to do this work :)

I have read a few by Isabel Allende and enjoyed them. I'll look for this one. What a contrast you highlight in these lifestyles! Her writing is so clear I can always picture myself in the scene.

Many thanks for this book review ...

Reading of the rationing makes my heart cry for all the people starving right now.

It sounds interesting in a sad way.

"Paid in bread", oh, boy... engine oil ... breakfast in bed.
Compare this to today.
Refugees wear red Nike-sneaker and have gold chains (not all, certainly) and my 80 year old neighbour had but fish heads growing up (not only, either).
Why is it so darn different in the world...

The Spanish Civil War fascinates me in a macabre way. Pan's Labyrinth depicts the surreal horror well. I'm currently reading The Fountains of Silence by Ruta Sepetys. Not into it far enough to judge it yet. I also like Love and Ruin by Paula McLain. (There's the whole Hemingway angle there, too.) I really need to move Allende's book up in my to-read stack.

Mae, what a comprehensive review of A Long Petal of the Sea. You brought out a few things I hadn't thought about and I enjoyed all the images as well.