"The First Thing You See" 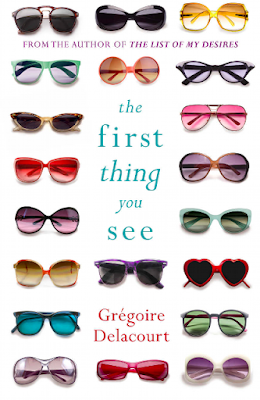 "Long" is a very small town in France, probably fictional, very reminiscent to me of Garrison Keillor's Lake Woebegone, Minnesota. In the novel The First Thing You See, author Grégoire Delacourt presents a rather strange tale about Long's lifelong resident Arthur Dreyfuss, a garage mechanic, and his unexpected visitor, who at first appears to be the famous film star Scarlett Johansson.

Here is a rather detailed description of the town:


"On the third evening of his life with Scarlett Johansson, Arthur Dreyfuss came home with Vicky Cristina Barcelona and The Island, the two DVDs that he had managed to find at the Planchard hairdressing salon (where you could also leave your ink and laser cartridges to be refilled). Easily recognisable by its boring brick facade, the salon had two little picture windows, a red brick mezzanine floor and a washed-out sign saying Édonil Hair Care. He was also carrying their dinner: cheese puff-pastry rolls (cheese again!), two plates of charcuterie, and a bottle of wine from Tonnelier – butcher, delicatessen and catering – in the Rue du 12 Novembre 1918.

"The butcher’s shop was a place that never dated. It was like something out of a Depardon photo, with its red and white facade and its black lettering, capitals with serious-looking serifs, like the lettering in a radiologist’s consulting room, each letter stuck on a different white cube. If there hadn’t been any cars or advertisements in the background you might have thought you were back in the 1950s. In Long, time seemed to have stood still, with its low-built houses, made of brick or cement, pitched tiled roofs, walls painted cheerful colours – yellow, ochre, or a happy sky-blue like the butcher’s shop." (Grégoire Delacourt, The First Thing You See, Kindle Locations 487-496).

Long is a very ordinary, even boring town, a perfect background for this rather bizarre and dramatic tale of love, sadness, and identity. The novel centers on the way that films, film stars, popular music, performers of music, classic literature, and many more cultural things swirl around in the consciousness of both the characters and the narrator. Delacourt explores the clash between imagination and reality. Ordinary people (like the residents of Long) are fascinated by famous film stars and the ideals of beauty that the stars represent. In the novel, these idealistic creations collide with the humdrum quality of their day-to-day life.

Ironically, the film star Scarlett Johansson, the real one, sued the author because he made her into a kind of symbol in the book. She won the case in French court, and received damages -- in the US, of course, the protection of free speech would have made such a judgement impossible. This says something about the book, I'm not sure what. Note that Grégoire Delacourt is a very famous and successful author in France, maybe not so well-known here in the US.

Just let me mention this: the town of Long and the life of Arthur Dreyfuss are both very French in many details, sometimes funny and often sad. One example of how French it is: Arthur Dreyfuss takes the seeming-but-not-real Scarlett Johanson to the town's best restaurant, the Relais des Orfèvres, which was run by the chef Jean-Michel Descloux and they have an expensive meal (at least by Arthur's standards). At the restaurant:


"The traditional menu, for real gourmets, was as follows. First course: a crusty timbale of fillet of smoked black pollock with creamed cauliflower; main course, roast hake with seaweed butter, crisp ham tuiles with piquillo sauce – made with a kind of sweet pepper grown in Lodosa in the Spanish Basque region – and finally, Julien Planchon’s cheese trolley or the dessert menu. The economic miracle of those 30 euros was contained in that ‘or.’" (Kindle Locations 829-832).

Because of details like these, and because of the eventually compelling plot, I enjoyed reading the book, but no spoilers. However, without telling the end, I want to quote this thought from the book:


"Unfortunately, there isn’t a musical score to accompany life as there is in films, only noises, sounds, words, coffee machines going cling, the castors on hospital trolleys going rrr-pfft-rrrr-pffft, and tears, sometimes cries reminding you that this is all horribly real, particularly in a hospital with deranged patients, emergencies, fear and goodbyes going on forever..." (Kindle Locations 1246-1249).

Because this book is set in France I'm sharing this review with this month's blog event "Paris in July," hosted by Tamara at Thyme for Tea. One of the other participants reviewed another book by Grégoire Delacourt, and gave me the idea to read this one -- I apologize, but I can't find that post any more!

This was a fascinating read, especially where the real Johanson sued the author of the book. I don't think that would happen here. The references to food and references to important people and movie stars made it appealing. It's certainly a different approach and I like that it's different from your last visits to France this July.

I saw the book in French : "La première chose qu'on regarde" and it seems that he meant the first thing you look at are women breasts – I thought it would do well on the US Market, ah! But I did not buy it. The cover on the French book was a woman in a red dress, but at least I like the cover of the book in English – all these sunglasses! Last time I was in the house in Atlanta clearing out old things I found a bag full of sunglasses, large and small from the 1960s on up since we did not throw anything away. I gave a bunch to the Goodwill but kept my late husband light blue round sun glasses (a la John Lennon.) It made me think also about Elton John – he does wear some glorious and wild sun glasses.

What an interesting review, Mae, and it sounds like it was a worthwhile read. I love how you include the food references! I like that too!

The quote " The economic miracle of those 30 euros was contained in that ‘or.’" sums up many real life menus!

Im intrigued by the idea of the film and theatre references, and really like the realisation that there are no music scores to life.... such an interesting concept.

What an interesting review. Thanks for sharing Mae!

I'm intrigued and I'm glad you finally read a book you could enjoy this month.