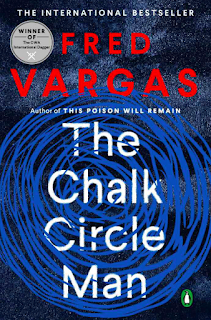 Participants in the blog event Paris in July have been busy all month describing a variety of recipes, books, book shops, music, personal experiences in Paris in the past, aspirations for future travel, and many other impressions of Paris. I've been enjoying all their posts, and thanks to some excellent reviews, I've discovered a few new authors. To see the final wrap up posts, check out Tamara's blog.

Among the books I learned about, I recently read a police procedural by Fred Vargas: The Chalk Circle Man, translated by Siân Reynolds. The book's blurb explains:


"Fred Vargas was born in Paris in 1957. A historian and archaeologist by profession, she is a number-one bestselling author in France. She is the author of eight novels featuring Commissaire Jean-Baptise Adamsberg, including Wash This Blood Clean from My Hand and This Night’s Foul Work. Her books have been published in thirty-eight countries and have sold more than four million copies.

I found The Chalk Circle Man different from English and American police procedurals that I'm used to reading. I was somewhat surprised by the extreme quirkiness of Commissaire Jean-Baptise Adamsberg and his fellow detectives, as well as of the suspects, and eventually the perp. These characters reminded me a little of the exaggerated personalities created by Boris Vian in his ever-popular French cult classic L'écume des jours, published in 1947. Right up front, we learn that Adamsberg "had solved, one after another, four murders in a way that his colleagues had found uncanny, in other words unfair and provocative." (p. 14). There are various bon mots like "a caress is no substitute for a good cup of coffee." Or "Mathilde sat up and pushed her dark hair back with both hands. Right, she thought, I’m just having a little attack of metaphysics and it will pass."

At the start of this book a mysterious set of events is occurring in Paris: someone is drawing chalk circles in the streets, and in each one appears a strange bit of trash or some object of no apparent meaning. Commissaire Adamsberg finds this odd sequence of actions significant. He demands that the police force pay attention. He collects people who seem to know something about the chalk-circle man, and they are eccentric too. As he interviews these possibly knowledgeable people, he always seems a bit inattentive and distracted, and he has a habit of making sketches of the people in the room. For example:


"Then she looked at Adamsberg, who was not drawing but was sitting with his legs outstretched, one hand in his trouser pocket, the other holding a cigarette in his fingertips and seeming so disorganised and nonchalant that it was hard to know how to approach him. But Mathilde sensed that he was quite capable of doing his job, even looking like that, or perhaps especially when looking like that."(p. 130).

Smells play a role also, in what seems a strange way:


"‘A thousand witnesses, a thousand noses,’ he added, smiling and spreading wide his long arms. ‘A thousand noses, a thousand different interpretations. A thousand interpretations probably add up to a thousand childhood memories. One person thinks of rotten apples, another vinegar, and tomorrow we might have people talking about what? Nutmeg, furniture polish, strawberries, talcum powder, dusty curtains, cough mixture, gherkins . . . The circle man must have a smell that reminds people of their childhood." (p. 145).

I was a little disappointed in the final resolution of the mystery, but no spoilers here. I might read another book by Fred Vargas, and I'm glad that Lisbeth at The Content Reader recommended her.

Other Finds from Paris in July

The Woman Who Didn’t Grow Old by Grégoire Delacourt, translated by Vineet Lal was reviewed by Annabel (AnnaBookBel). She wrote:


"If you enjoy the books of Antoine Laurain or Jean-Paul Didierlaurent, you’d probably enjoy Delacourt too."

Intrigued by her review of this author, who was new to me, I read his book The First Thing You See, which I reviewed last week (link). It was very enjoyable! Eventually I think I'll read other books by this popular French author.


Lisbeth at The Content Reader also introduced a favorite thriller writer, Michel Bussi with the book Time is a Killer. She writes:


"Michel Bussi is a professor of geopolitics and one of the most popular French authors today. He has written numerous novels. I have earlier read After the Crash and Black Water Lilies. They are both excellent. I enjoy thrillers and mysteries that have an interesting story. Bussi provides this in all his books. The stories are often very sad, and the murderers become killers by pure accident."

I hope to try one of his books soon.


"There is nothing like this trilogy to capture the Zeitgeist of recent years, Despentes (and Frank Wynne’s wonderful translation) captures the despair and frustration, the polarisation and depression, and makes the reader feel part of it. Yet amongst all this negativity, there is friendship and some cause for optimism."

Finally, I'm intrigued by The Reader on the 6.27 by Jean-Paul Didierlaurent, which was reviewed by vvb32reads, who recommended several other interesting books. Also, Nadia at A Bookish Way of Life recommended Didierlaurent’s book The Rest of their Lives. And I thank my fellow bloggers for lots more very tempting reviews of French books and films that have been posted this month.

As a lover of Paris, I have visited there many times. I hope that the world situation will clear up so that I can go back again some day not too long in the future. Meanwhile, I've enjoyed the many virtual visits to Paris that I took in my own blog and on other blogs this month, Paris in July.

I am happy to hear a little about the writing of the author Fred Vargas. I think these stories would interest me; I prefer good characters to a good plot. And my library has three of his books. I'm bookmarking these for 2021 Paris in July. Thank you.

All these writers are new to me. My reading of French literature in translation has been mostly confined to the classics. I probably should broaden my reading a bit. Thanks for sharing your reading.

Thanks for reviewing this book for me Mae. A friend just recommended it to me the other day. So 2 recommends means I might have to check it out.

I haven't read Fred Vargas but you always introduce me to new ( to me) authors. The Woman who didn't Grow Old is appealing.

All interesting. Fred Vargas intrigues me. I think I'd like the Chalk Circle Man.

"a caress is no substitute for a good cup of coffee." Could be my morning mantra. I've read a similar themed book to this one which was really good.

I have read and enjoyed one book by Vargas and have another in my TBR stack. I'll check on these other authors. I enjoy finding new-to-me writers :) Thanks!