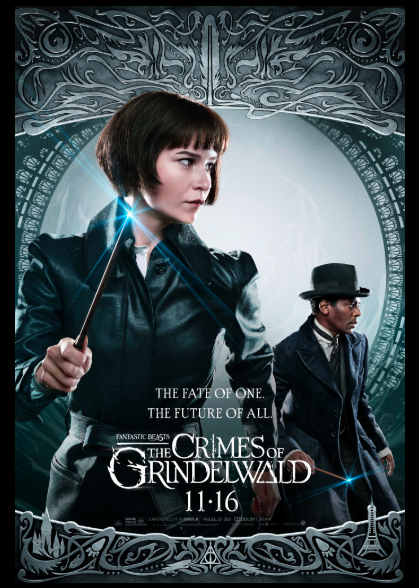 We finally saw it. As you see from this poster, it's been out for over a month. Unfortunately, we found The Crimes of Grindelwald much less amusing and captivating than the earlier "Fantastic Beasts" film. It repeated a lot of the clever stuff without really being as clever the second time. The character development wasn't even close to past films about the Harry Potter wizards.

I felt as if what I was seeing was FANFIC -- made by a lesser imagination. But with expensive special effects -- lots of explosions and smoke and big twirly things in the sky or under water.  Rowling's Wizards here do a lot of dramatic disappearances in flashes of light and puffs of smoke; they walk on the edges of tall buildings and stuff they were too powerful to bother with in earlier films. But I liked them better when their characters were more nuanced.

The Crimes of Grindelwald left enough loose ends to fill maybe four more films. In fact the ending felt like a cliff hanger in those old time Saturday afternoon movie serials. I'm not as excited about seeing them as I would have been if I liked this one more.
Posted by Mae Travels at 7:33 AM

That is disappointing the movie didn’t measure up. We just checked the Fantastic Beast movie out of the library but haven’t watched it yet.

oh no! i was so looking forward to this one.