Who doesn't love the Beatles? 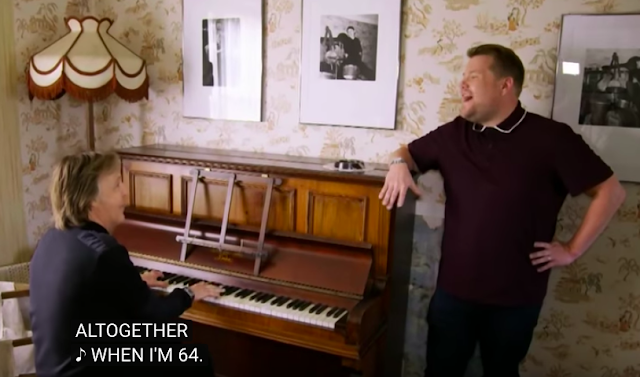 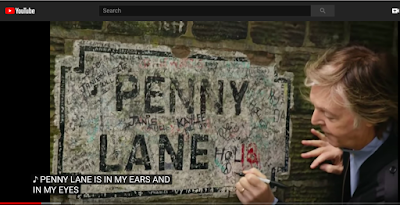 On Youtube: "Paul McCartney: Carpool Karaoke" -- Evelyn, Tom, Miriam, and Alice, who arrived for a visit yesterday, enthusiastically shared this delightful video, which was published last week. And we loved it! I had no idea of how many Beatles songs I know by heart -- at least the first verse, anyway.

In this video, McCartney, accompanied by British late-show host James Corden, sings along with his own Beatles songs while riding in a car through the streets of Liverpool and exploring locations from his youth there. As three generations of Beatles fans forever, we loved it. If you are at all fond of the Beatles, don't miss it! 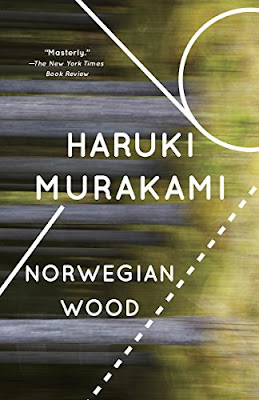 Another Beatles fan I've encountered recently is the central character and narrator in Haruki Murakami's novel Norwegian Wood. While I didn't much like the movie (which I watched recently and wrote about HERE), I enjoyed the book, which I just finished. I especially liked one scene when the character and one of his friends name songs, including dozens of Beatles songs.

The action in Norwegian Wood takes place in the late 1960s when the narrator and all his friends and lovers were college students or young people of college age. It makes sense that the Beatles' songs are everywhere in their lives. In fact, of course, the book's title comes from the title of a Beatles song.

The connection between the troubled lives of the characters, their troubled view of the social unrest and student activism of the time, and various Beatles songs is subtle. It's one of the things that are left out of the movie. Although the movie borrows a lot of dialog directly from the book, I felt that it left out all the detail that made the book really enjoyable, and overemphasized just the sexual relations between the characters and a few other aspects of the plot.

Norwegian Wood is full of wonderfully detailed observations of nature, of human emotion, and of little details of life in a Tokyo dormitory and in a rural setting far from the city. This penetrating use of detail is in fact one of the reasons why I love Murakami. I enjoyed the food scenes in the novel, where the narrator has meals in coffee shops, restaurants, and homes of other characters, but I'm not going into that right now!

I see why Norwegian Wood was so popular with young people in Japan when first published. I don't see how I managed to skip reading it for so long!
Posted by Mae Travels at 7:55 AM

Actually, hubby, 16 years younger than me, is a GIGANTIC Beatles NUT. I liked the early Beatles. Not so much the drugged up version. Norwegian Wood is my favorite Beatles song, but didn't see any movie. I'll have to look into the book; thanks!

Loved the McCartney/Cordon journey so much. Just the best!