"Dessert crowns dinner. To fashion a beautiful dessert, you have to be at the same time a confectioner, decorator, painter, architect, ice-cream maker, sculptor and florist." (p. 100) 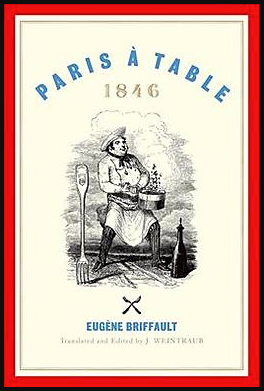 In 1846, Eugène Briffault published a little book about the food of Paris, including brief chapters about dinner, breakfast, lunch, supper, formal meals at grand houses, restaurant customs, a bit of food history, and lots of other miscellaneous disquisitions.

Paris à Table is delightful. The original illustrations by Bertall are irresistible! They look somewhat familiar: I think because they are in the public domain they have been published in many other contexts. The English translation by J. Weintraub, published by Oxford University Press, is brand-new.

"Dinner in the current age," Briffault tells us, "has, more than those that preceded it, its own distinct character." (p. 50)

He then describes many types of dinners. I was especially amused by this:


"In Paris there is a kind of succulent diner almost beyond reproach: these are the ones given by single men of leisure, persons withdrawn from the world and comfortably placed, who quietly pass the better part of their lives in an exchange of genteel gourmandizing. These meals are called bachelor dinners.... Youth  and women do not like being in such company; mature years and a vigorous  old age find considerable delight there. It is not rare to see ... a fine fish, a marvel of a chicken or an extraordinary roast of game, a renowned fish stew or a perfect pheasant in sauce, or some celebrated spring vegetable... . Married men, out on a fling and far from the conjugal pot-au-feu, also love and cultivate fine fare. These tables have a motto that exactly sums up their tendencies and preferences; upon sitting down the diners say to each other: 'Let's go slow and easy, and eat everything." (p. 55-57) 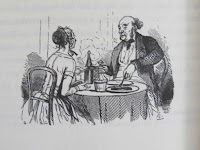 Surprisingly, Briffault also has a chapter titled "People who do not dine," in which he talks about more unfortunate Parisians:


"This distress -- its existence hardly suspected by people with full stomachs -- strikes not only those who have been reduced to this extremity by vice, idleness, or debility; those kinds always find some sort of feed somewhere; they get it from the pity they are not ashamed to provoke... The hungry who are good and decent are also around, and their strategies are fertile and ingenious. ... Literature, the arts, everything dedicated to the worship of thought and the imagination supplies Paris's emaciated population with an enormous contingent. Hunger, felt so often by the talented, lays its hand also on genius." (p. 112-113)

These are only a brief hint about the pleasures of this document about Paris in the nineteenth century. You can learn that some things are still the same, such as the cluster of restaurants in the Palais Royal, and some things are very different, such as class distinctions and formal manners. I have no idea if this has been translated into English before, but it's great to have this edition.
Posted by Mae Travels at 1:04 PM

What a fun and interesting little book! Love the illustrations. ;-)

I do love anything Paris!!

This sounds like a very interesting book. Thanks for posting upon it.

Enjoyed the quotes and passages you pulled for this post. Apparently, we are prone to bachelor dinners when dining out---leisurely eating everything!

That's a great little book you have there. I would enjoy the illustrations and you'd have to read it to me as it's French. that would be fun. Well, for me anyway :-)

@tina — The new edition I read is in fact a translation, so you can read it if you would enjoy it. I think it would be fun for anyone who is curious about French food in the past.

Thanks so much for your kind mention of my translation of Paris à Table. It--and the comments--were much appreciated. Did you know that the book was chosen as one of the 8 non-cookbooks recommended for Summer reading by Bon Appetit? More here: https://www.bonappetit.com/story/8-non-cookbook-food-books-to-read-this-summer

All the best and keep on blogging!

@joe weintraub -- Thanks for your comment. In fact, I read about Paris à Table in the Bon Appetit article. I'm glad I learned about it. Such a great book for learning about 19th century French food.

This looks just delightful if only for the illustrations, not to mention good content. I wasn't familiar with it at all, so thanks for bringing it to my attention. Oh, how large that pile grows...

I might pick this up for my sister. She has been obsessed with Paris since a visit there 5 years ago.