Paris, Where Intellectuals and Tourists Never Cease to Roam 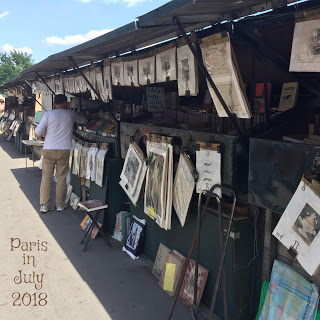 You may think of Paris as a wonderful place for tourists, with its bookstalls along the Seine, with its tempting outdoor spaces in parks and cafés, with its classic restaurants and pastry shops, with its great museums and outdoor art, with its beautiful boulevards and historic buildings, and with its eternal presence in art, film, and literature.

Paris definitely offers a space where tourists flourish. Three books I've been reading recently also provide insight into the way that Paris has served as the intellectual nerve center of France, a center that influenced the intellectual life and development of the Western world for centuries. Each of these books could easily be the subject of a long review, and in fact, they've all been reviewed at length in the best publications! I'm just going to present a few ideas and quotes from each one, reflecting what I find interesting about them. 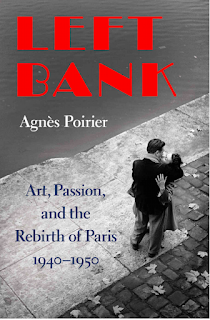 Life under the Nazi occupation of Paris was brutal. Food was scarce. Artistic freedom of speech, freedom for public performances, and freedom for publishing didn't exist. The price of even a bit of liberty in these areas was often to concede much to the occupiers of Paris. Yet many of the inhabitants of Paris managed to continue their lives in cafes, bars, and other spaces both public and private.

Poirier concentrates on the lives of some of the most famous inhabitants of Paris in the decade of the 1940s. She describes the lives of the literati like Camus, Sartre, deBeauvoir, Arthur Koestler, Samuel Beckett, and of New Yorker writers A.J. Liebling and Janet Flanner. She talks about actors and performers like Boris Vian (both a musician and a writer), Juliette Greco, Simone Signoret, François Truffaut, Marlon Brando, and at the end of the decade rising stars like Brigitte Bardot.

Poirier especially portrays the role of Jacques Jaujard, the deputy head of the French National Museums, who succeeded just before the Nazi occupation in hiding the works of art from the Louvre. I was especially interested in the Mona Lisa, which was hidden at the Château de la Treyne, in the Périgord region "where André Chamson, an archivist-paleographer by training, a novelist by métier, and an improvised keeper of France’s treasures by force of circumstance, lived with his family." (p. 47).

With the Liberation in 1944, many freedoms were restored, including free elections: "French women had cast their vote for the first time in the first national election since before the war in October 1945." (p. 136). At the same time, victims of Nazi deportations began to return from concentration camps, and the intellectuals of Paris realized the extent of the torture, the consequences that these absentees had faced, and the large number who hadn't survived. Also, as the decade progressed, Sartre and deBeauvoir became celebrities, and many of the more obscure people who appeared in Poirier's story became more successful and famous.

Besides the immediate and terrible discoveries just after the war, Poirier describes the growing number of Americans who came to Paris, especially those such as Saul Bellow, Richard Wright, James Baldwin, and Norman Mailer who studied on the GI bill. As writer Art Buchwald put it: "If all the GIs in Paris who are supposed to be enrolled went to class, they would need a soccer stadium to accommodate them." (p. 231).

For the post-war survivors, food and consumer products remained scarce for several years after the war. The impact of the Marshall Plan was one of the interesting subjects of Poirier's story. Also, those like Simone deBeauvoir who were privileged to travel abroad brought all sorts of unavailable goods back. For example:


"Simone de Beauvoir, returning from her trip to Portugal and Spain... brought back in her suitcases a hundred pounds of groceries— ham, chorizo, Algarve cakes, sticky sugar, eggs, tea, real coffee, and real chocolate— and was handing them out generously to friends, lovers, and strangers. She had purchased many clothes, too, folkloric sweaters, Spanish scarves, and multicolored fishermen’s shirts from Faro in Portugal." (p. 83).

But finally, supplies of food were restored: "Christmas 1949 in Paris had been the first in a decade without food restrictions, and Parisians spent all the extra money they had on food. Not for a quarter century had the food markets of Paris been fuller or more tempting. In the charcuteries Janet Flanner spent a long time studying “turkey pâté, truffled pigs’ trotters, chicken in half-mourning, whole goose livers, boar’s snout jelly, and fresh truffles in their fragile bronze husks.” (p. 289).

When I first read about this new book, I thought it sounded like a repeat of many other treatments of the famous intellectuals of mid-century Paris, but I loved reading it and learned all kinds of fascinating new things. 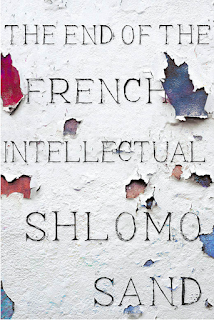 The End of the French Intellectual by Shlomo Sand, published April, 2018, translated from French by by David Fernbach.

Author Shlomo Sand -- a native of Israel with a doctorate from a French university -- supports his belief that the French intellectual tradition is now over and past by offering an extremely detailed history of intellectual life in Paris. He points out that Paris was not just the center, but the only home of French literature, art, and learning. He writes:


"Any attempt to decipher the role of intellectuals in France must start from the following postulate: the public sphere here is more homogeneous and more centralized than in any other liberal democracy, and the origin of this cultural and linguistic homogeneity lies in the long effect of absolute monarchy." (Kindle Locations 300-302).

Idolizing of the French intellectuals of the mid-20th century, such as Sartre and deBeauvoir, was Sand's early experience, and one of the main points of his book is to show how disillusioned he became as he learned more about their actions during the Nazi occupation of Paris and their later success at revising the way history views them. He judges them harshly.

To quote more from Sand which is relevant to the theme of Paris in July:


"The particular status of Parisian intellectuals is a phenomenon that has been repeatedly studied. In a society where the level of language itself amounts to an ideology, and cultural distinction still competes with social distinction, the ‘producers of high culture’ have always enjoyed eminent privileges.

"We might say that in the French capital, intellectuals have inherited both the role of court jester, able always to say whatever was in their minds without being punished, and that of priest, serving as intermediary between the believer and divine truth. Nor has France ever forgotten that, since the great epoch of the Enlightenment, the prestige capital built up by men of letters made Paris for many years the cultural epicentre of the Western world. It could even be maintained that in Paris today, intellectuals have long been the last aristocrats. And if the monarchist tradition has been replaced by a popular thirst for authoritarian and paternalist presidents, a deep nostalgia for knights and musketeers, seemingly foreign to bourgeois values, has also contributed to the prestige of this modern ‘nobility of mind’, who confront dangers and brandish their sharpened pens to defend truth and justice." (Kindle Locations 276-285).

"The intellectual currents that have stamped their mark on Western culture, such as symbolism, surrealism, existentialism or structuralism, were not born in France but in its capital. These artistic expressions and magnificent currents of thought, like many others, appeared in the Parisian press, in periodicals established in Paris and in books that were published there." (Kindle Locations 318-320).

I found the book intriguing, but I felt it was too detailed about some of the political fights of late 19th and early 20th century intellectuals. At the end of the day, I'm not sure I find his depiction of betrayals and bad faith among the Existentialists to be entirely convincing. Frankly, his introduction about how he became disillusioned was the part I liked the most. Americans in Paris: Life and Death under Nazi Occupation 1940-1944 by Charles Glass, published 2010.

The author's introduction summarizes this book as follows:


"Nearly 30,000 Americans lived in or near Paris before the Second World War. Those who refused to leave were, paraphrasing Dickens, the best and the worst of America. Like the French, some collaborated, others resisted. The Germans forced some into slave labour. At least one was taken back to the United States to face a trial for treason. Americans in Paris under the occupation were among the most eccentric, original and disparate collection of their countrymen anywhere – tested as few others have been before or since. This is their story." (p. 1).

But I've said enough about these books.

Bloggers participating (as I am) in this month's "Paris in July" blog event have written about their love of long walks in Paris, their awe at monuments such as the cathedral of Notre Dame, their favorite French cookbooks, and their enjoyment of recent novels set in Paris (many of them written in English by American or British authors), as well as of their consciousness of Paris in history. Many connect with the Paris of artists like Picasso in Montmartre, writers like Hemingway and F. Scott Fitzgerald in the Latin Quarter, or film settings like that of Woody Allen's Midnight in Paris. I think I've made the point that there's always been another Paris besides the one you think you know.
Posted by Mae Travels at 4:02 PM


Thanks for this post. I Will try to read all these fascinating sounding works. Below are a few works I have posted upon in past Paris in July Events that I hope might interest you.

Shocking Paris Soutine, Chagall and the Outlaw Art of Montaparrne by Stanley Meisler-
A Well done account of Yiddish emigre artists in Paris

Life, Death, and Betrayal at The Hotel Ritz in Paris by Tilar Mazzeo

Paris at War 1939 to 1944 by David Drake is a very well written fully accessible by non academics history.

Lots of good reads here, Mae! Our older son just returned from Paris, etc. So many beautiful things to see there and he enjoyed it as much as we did years ago. Thanks for all the reviews!

Your write up on Left Bank has me ordering it through our inter-library loan section. If we had food rations and suddenly had access to good food again it would be such a high. Imagine the elation of the shoppers.

You are SO right! That first one sounds really good to me. Actually, the first two. I loved Americans in Paris. I read it a few years ago and wrote it on my (now private, since I never write on it anymore!) blog, Chopsticks and String. Fascinating learning some of the back story -- the collaborators, the resistance. It's worth the time.

Thank you for sharing these books about Paris as "an intellectual nerve center." I found that was true of When Paris Sizzled. That was the appeal of college for me; I was around so many clever folks.