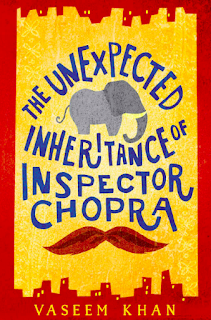 The Unexpected Inheritance of Inspector Chopra by Vaseem Khan is a very amusing detective story set in Mumbai. Chopra, a police inspector, retires but continues to try to solve a mysterious murder that occurred on his last day of work. At the same time, Chopra's long-lost uncle sends him the gift of a baby elephant. He calls the elephant Ganesha, which is the name of a god in the Hindu pantheon: a god whose form is that of an elephant. Little Ganesha (he only weighs a few hundred pounds) turns out to be a remarkable creature who is of great help in confronting the very evil criminals that Chopra confronts in this mystery.

Here is an account of events during the first time Ganesha helps him. He's trying to convince Ganesha to accompany him in pursuit of a suspect:

"‘I do not require chocolate,’ he said, stiffly. ‘It is not for you,’ said the man with a kindly smile. ‘When I was young, my father worked in the Grand Kohinoor Circus. It was his job to train the elephants.’

"Chopra took the bar of chocolate and examined it suspiciously. The old man nodded encouragingly. Unconvinced, he broke off a piece from the slab and offered it to Ganesha. The elephant sniffed at it with his trunk, then took it and put it into his mouth. He blinked. His tail twitched. His ears flapped. Then, with a shake of his head, he reached out his trunk for the rest of the bar. Chopra pulled it away, then backed off to the escalator. ‘Come and get it, boy.’

"In this way, he managed to coax Ganesha onto the escalator, which, like everything else in the mall, was made to a gargantuan scale, easily wide enough to accommodate a nervous baby elephant. As they travelled up to the next floor, a buzz of laughter erupted around them." (pp. 138-139).

Throughout the rest of the story, Ganesha can be bribed into helping or into being docile if he's given chocolate. As he rests in the living room of Chopra's apartment, for example: "A drift of Dairy Milk chocolate-bar wrappers lay strewn around him, as if a children’s party had just taken place." (p. 162).

I've encountered the wonderful elephant god Ganesha before, and have learned that indeed, he's a great lover of sweets and candy, although his traditional favorites are more exotic than Cadbury chocolate. Sweet coconut dumplings, colorful saffron-flavored pastries, sweet puffed-rice balls, and nice ripe bananas are more to his taste traditionally, and for each one there's a cosmic reason why the god loves them. (See "5 foods that Lord Ganesha loves, and you should too")

More about the elephant god Ganesha:

Above: a 6th century statue of Ganesha that I photographed at the Norton-Simon Museum in Pasadena. The god is using his trunk to eat sweets from a basket. The documentation provides one of many stories about Ganesha, explaining that he once ate so much that his stomach burst, and the moon laughed at him. So he threw one of his tusks at the moon -- many Ganesha statues thus show him with only one tusk.

So you see that the little elephant in the Inspector Chopra book belongs to a very long tradition. I especially enjoyed the detective story for its many descriptions of the modern city of Mumbai -- from shopping malls to miserable slums and from high-rise middle-class apartment buildings to luxury villas for rich and unscrupulous characters.
Posted by Mae Travels at 10:00 AM

Delighted to see your Review


The Unexpected Inheritance of Inspector Chopa is the debut novel of Vaseem Khan. I loved it and hope it is the first of many to come. The subtitle of the book is A Baby Ganesh Agency Investigation, is giving me hope it is the first in a long series of works centering on retired Mumbai Police Inspector Chopra, his wife Poppy and Baby Ganesh, a four hundred pound baby elephant he unexpectedly inherited from an uncle.

Vaseem Khan is from Mumbai and he totally brought the sprawling mega-city of twenty million to life, as seen though the eyes of a veteran police inspector, a head officer of a police station. As portrayed police officers of all ranks are very tempted to fall into corruption. The pay is not huge and giving into graft can bring riches. Inspector Chopa in his thirty year career has never given in. He is fifty and has recently had a heart attack and is being forced into early retirement. He and his wife Poppy have no children, they live in a good high rise community. He worries what he will do once he retires, his wife wants him to just relax but he really has few outside interests.

On the last day at work there is a nice party for him. He also gets a very unexpected gift, a baby elephant. He names him "Ganesh" and takes him home and chains him up out front of the building. Needless to say, Poppy is not real thrilled. Near his last day a woman came into the station saying her son has been murdered but because he is from a poor family know one will really investigate his death. Chopa is bothered by this and from that feeling the story unfolds.

Poppy is a great cook and foodies will relish all the meals she cooks.

Chopa starts on an investigation that takes him to the mansions of a lord of Mumbai gangsters, to a huge slum, almost gets him killed and infuriates Poppy by his failure to stay home, with visits to all sorts of interesting places perfectly included. As Chopa continues on his investigation there are several interesting and so much fun to follow subplots. At first Poppy is very mad over the baby elephant, but soon she is feeding and bathing him and fighting with the president of the building owner's group over their right to keep a baby elephant. Ganesh actually becomes a "house pet" for a while. The ban and shame of Poppy's life is her medically established inability to have a child. She hatched a truly crazy plot to make her husband think she is pregnant and will have a child. Ganesh bonds more and more with Chopa and he takes the elephant along on his investigations. In a scene I loved, a few may groan over it, Ganesh saves the Inspector from being murdered by gangsters.

The denoumont of the novel is just wonderful. It is a happy feel good close I really enjoyed. I never saw it coming but I loved it. Something exciting and unexpected happens every few pages. The characters, including Baby Ganesh, are really well realized. This feels like it might be the start of a series and I certainly hope so.

Mae,
Sounds like there is some interesting information about Indian culture and religion along with this delightful story. I don't know much about India except that I like Indian food..

This is a new to me book. I didn't know elephants liked chocolate.

Thanks for the info on Ganesh. I have always been drawn to those images. The book sounds hysterical.

This does look like a fun read. I too can be bribed with chocolate! ;-)

It is so funny that this author writes books featuring elephants. I was intrigued when you posted the previous novel.