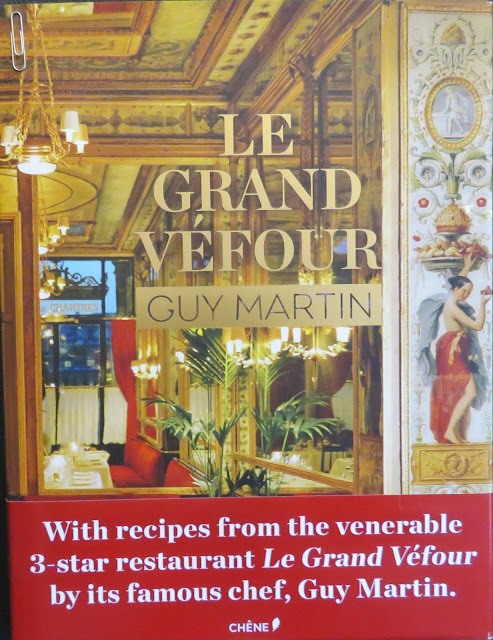 Le Grand Véfour by Guy Martin is large, flashy, and overwhelming cookbook that documents the current state of a historic restaurant: Le Grand Véfour. The restaurant is located in the Palais Royal in Paris, and preserves its historic interior, while serving a very modern style of food.

For the photo above, I placed a paper clip on the upper left-hand corner to give you an idea of the massive size of this book. It looks expensive, but in fact was one of those bargains that appear on amazon.com from time to time, and I went for it -- $20! I love to read about Paris and its restaurants of distinction, though I definitely could not afford to eat at this one.

This large and dramatically illustrated book begins with a history of the restaurant, including photos and drawings of the exterior (that is, the gardens of the Palais Royal) and the grand and historic interiors of the restaurant. It includes sketches by Jean Cocteau, Picasso, and other famous artists who ate there, and reminiscences of writers and other famous patrons.


Following this colorful history, author Guy Martin offers an impressive collection of recipes. Martin has been chef of this Michelin 3-star restaurant for a number of years, and he's known for his culinary ability as well as for the historic and decorative features of the restaurant. Although the preparations are complex and require quite specific, expensive, and hard-to-find ingredients, I think it would be possible to follow them -- with a lot of patience! 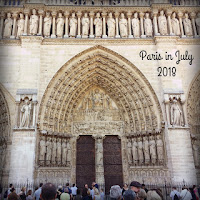 This month is almost over, and many bloggers are wrapping up a very amusing blog event called Paris in July, hosted by the blog Thyme for Tea. I'm happy to offer this post about the Palais Royal: a favorite spot for a Paris aficionado. I've visited there often.

The book I reviewed yesterday, Paris à Table 1846 mentioned the restaurants then in the Palais Royal often, including Le Grand Véfour and an earlier restaurant called simply Véfour. Many films have been made in the gardens and interiors of this monument -- my favorite of them is Charade with Audrey Hepburn, with Midnight in Paris coming in second, maybe.

I hope to do a wrap-up post on Paris by the end of July.
Posted by Mae Travels at 6:00 AM

Big, beautiful cookbooks with lots of impossible recipes are one of the things I love about this world. Why? It reminds me that there are many things I know nothing about yet. I like that.

Midnight in Paris is one of my favorite quirky films. I had no idea that scene was filmed there. Great information and history as always, Mae.

Oh, I loved Paris, with the exception that I thought it was kind of a dirty city, but so much history, great architecture and food. So now I have to look for this nice book. I'm going to have to start counting all the books I've read/bought because of your reviews. :-)
I do remember the restaurant from the movie that I've watched more than once.
Great photo of Collette, and a great movie made from her novella! Interesting post as ever!
I'm back to blogging, couldn't stay away, but had a nice break! :-)

Okay, since moving into this big 41' fifth-wheel travel trailer I've bought about 20 books... I wish I had room for more cookbooks! Will try and pin your books to bring some other French cookbook readers over. :) It has been a pleasure to be part of the Paris in July posts with you!

Thanks for all the recommendations,
Barb :)

Mae, I didn't know there was a restaurant in the Palais Royal open to public. One fancy restaurant I have been to was le train bleu at le gare de lyon. Thanks for introducing this chef and his place to us.

That's a seriously huge book. And a gorgeous one, I must say. How elegant it would be to eat there. Somehow I don't see it in my cards... sigh...