French people care about politics -- French politics! They know a great deal about the lives and histories of recent candidates for president of France. They care about literature, mostly French literature, though they are aware of writers from elsewhere: Shakespeare, for example. They care about a variety of genres of popular music. They have their own stars in music, literature, art, film... as well as sharing the love of many stars from England and the US.

Paris is the center of French life for politics, literature, music, education, and most other cultural activities. To live and work outside Paris can result in others viewing you as a failure or at least can result is others seeing you as giving up your ambitions. 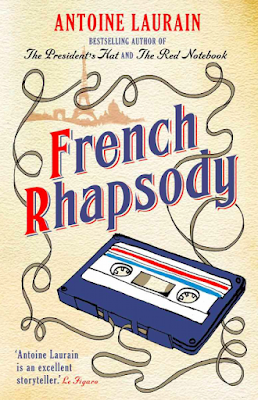 All these basic facts are in play in the novel French Rhapsody by Antoine Laurain (published 2016). Several fifty-something men and one women in roughly the present moment (maybe 2015) reconnect many years after their one shared moment from their past. For a brief time, they had tried to form an innovative popular band -- "The Holograms, that was my group, my rock group. Well, it wasn’t rock, it was new wave; cold wave to be exact," the central character explains. (Kindle Locations 127-128).

A strange coincidence brings the members of the long-dissolved group back into contact through a rather wacky and revealing set of events. The man who engineers the reconnection has become a rather dull doctor who has followed his father's footsteps treating very ordinary people's ordinary illnesses. Two of the other men who shared the brief dream are now powerful political leaders in opposing political parties. One politician was "To the Right of the Right" (Kindle Location 1119) and the other was a very rich businessman whose political position would only be understandable if you were French.

Another man from the group had become a kind of conceptual artist, moderately successful. He desperately craved recognition and adoration for his works. The last man in the band had been a very eccentric antique dealer, but had committed suicide in a rather bizarre way around a year earlier. The only woman, the group's highly talented singer, had lived in Paris only briefly, and long since returned to the provinces to run her family's hotel.

Each one who had shared in the band's brief existence also had a few significant close relationships with a spouse, a girlfriend, or children. The author provides a vivid look at the facts of their current existence and their current frustrations. At the same time, the author is surprisingly terse, portraying each character with just a few details, and telling the story of their reconnection in a suspenseful way so that the end is actually a surprise (but no spoilers). He refers to many French cultural icons such as the book Le Grand Meaulnes by Alain-Fournier (Kindle Location 1449), the restaurant in the Gare de Lyon called Le Train Bleu, or "an arthouse cinema on Boulevard Saint-Michel." (Kindle Location 1382).

Could this group really be a kind of "everyman" and "everywoman" who reveal a key cross-section of French life? And at the same time, satirize life in France in quite a funny way? That was how it seemed to me. Each character occupied a different social position in a typical neighborhood of Paris (or in the case of the woman, outside Paris). Each man had his own frustrations with his life and his own regrets about his past (maybe the woman didn't have as many regrets). As the story unfolds, each one is forced to think about how much life has changed since they were young, which could be pretty ordinary, but this is no ordinary tale.

Here's just one example. A publicist is attempting to create a new image for JBM, the not-right-wing very rich businessman character with political ambitions. So she makes him cook (how French is that?) --


"For half an hour, JBM had been stirring a now-overcooked pot-au-feu under the spotlights set up in the kitchen, to the constant flash of the camera. The domestic staff – the cook who had actually made the pot-au-feu, the butler and the housekeeper – had withdrawn discreetly to the doorway, where they stood watching Monsieur pretend to be an enthusiastic weekend cook, while doing their best not to smirk or nudge each other. Monsieur, who couldn’t boil an egg and was barely capable of pouring himself a Nespresso from the machine.


In an article about the book, author Antoine Laurain wrote: "I called the book Rhapsody because nothing is certain in a rhapsody. It’s a very particular musical form, free, full of movements, and most of all, as unpredictable as the times we live in." ("Antoine Laurain: My country is the same as yours. Politicians have never been so unpopular" The Guardian, November, 2016)

My friend the blogger Jeanie at the Marmelade Gypsy recommended this author, for which I thank her enormously! She wrote about his other book, The Red Notebook, and said "It's all so simple. Yet so wonderful." Yes.
Posted by Mae Travels at 10:00 PM

Mae, I'm so glad you posted about this one. I haven't read it and it will surely be on my list. I need to share this link with Tristan Blakeman -- I think he was going to get this one. Looks very good indeed. (Loved the segment you wrote about!)

What a terrific recommendation! Jeanne at the Marmelade Gypsy also suggested I visit here to read about this book which I mentioned I wanted to read. Small little blogging world LOL.
Your review has me even more excited to receive my order for this book in the mail - thank you! It's always nice to start a book with anticipation!

So good that both @Jeanie and @Tristan are also fans of this author! @Tristan -- I tried to leave a comment on your blog, but the software wouldn't cooperate.

This is my favourite of the 4 Laurains I've read (yet to read The Red Notebook). It really had that state of the nation edge to it, which was fantastic alongside his usual charm offensive. You MUST read The President's Hat next...

Mae, as you know I dont read alot - but have read this one and others by this author and enjoyed them. Thanks for reminding us all of Laurains collections.