I have loved Cusine et Vins de France for many years. I discovered the magazine during one of our long stays in Paris in 1976, and I subscribed a few times in the 1970s and 1990. Founded in 1927, the magazine has a long history and included various well-known writers' work, including that of American cookbook author Richard Olney who wrote a column in the 1960s.

Current issues of CVF include many American foods, which are evidently popular in France. For summer, they include lots of fruit, especially apricots. Also: many pizza recipes, French classics like clafoutis, and lots of desserts. Later this week, I hope to try some of the recipes from either an old or a new issue of the magazine, and I'll post my results!

I thought I had recycled all my old cooking magazines, but last year when I cleaned the attic, I found one box that had survived. Here are some CVF covers and sample pages from this little hoard of magazines. I selected summer issues for most of these photos, to illustrate the foods and wines that they suggested for summer dining. 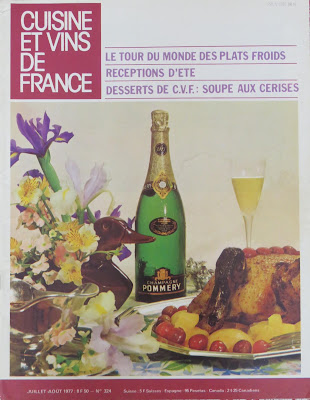 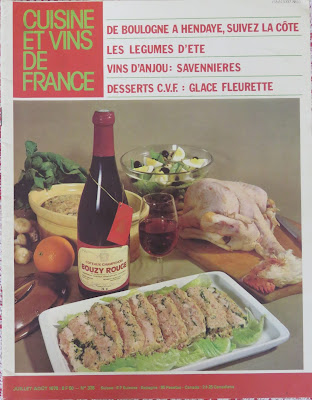 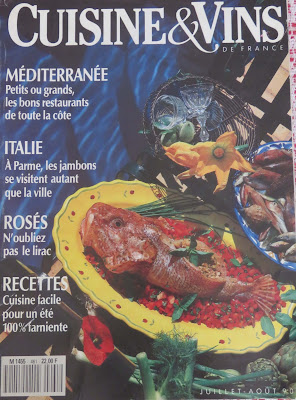 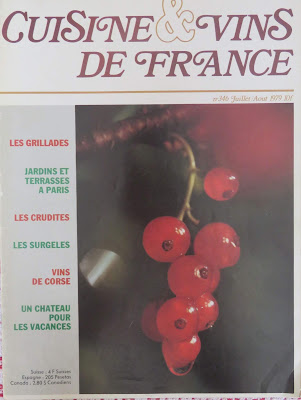 I'm sharing this post with the summer blogging event called "Paris in July" hosted at the blog Thyme for Tea HERE. Around 30 bloggers from around the world have been reading novels set in Paris or other parts of France, finding photos from their past trips and arranging them in interesting ways, cooking French food, looking up French art work, and doing lots of other creative things to share with the group.

What a fun attic discovery.

I love retro foodie magazines--so fun to look through. It sounds like a great blogging event too. ;-)

I have a difficult time parting with my favorite magazines- When I come across some old ones, I enjoy them all over again--
Despite my husband having some roots in France, I just don't love French cooking ( probably because I am vegetarian/vegan)
Thanks for sharing this interesting info...

This looks like a wonderful magazine -- and I'm betting you can even read it. (I couldn't!) See why we should never throw anything out? We'll have wonderful events like this and wish we'd saved it like you did!

I'll be looking out for this - what fun! Have a great week.

This is fantastic! What a little treasure to have those issues still to this day.

Some of those 70's covers don't look as appealing as they no doubt did in their time!! You can almost see the photographers flared jeans, long hair and poncho in the periphery :-D

I'm a little addicted to French recipe magazines - and so is my French friend and neighbour, and we always swap and share, ensuring we never run out of ideas.

What a lovely find!
(PS - my new website is mollytotoro.com/blog)

Oooo, I don’t think I could part with that magazine. It’s beautiful. I wish I could speak and read French.

Oooo, I don’t think I could part with that magazine. It’s beautiful. I wish I could speak and read French.

On another recent post, Nancy Burns commented about this article:
"I'm tempted to buy a subscription for this magazine. Is it all about cooking or is there a mix with culture and history of French regions?"

"What is your opinion?"

Answer: Cuisine et Vins de France today has a few cultural articles, but I don't know if it's what you are looking for. I suggest that you explore the website that's linked in this blog post and also this link:
http://www.marieclaire.fr/cuisine/tendances-cuisine,2615666.asp1

What fun to discover these treasures again.

What a neat find!

Oh you've inspired me so much Mae! I've just followed them on FB. Thanks.

I have my own stack of French cooking magazines that I bought on trips to Paris and I was subscribed for a while. I should dig those out... I've got a few French language recipe books too. I should cook something from those too this month. I love cooking from French recipes.

I love food magazines! I found a library sale the other day that was selling them for 10 cents each and I bought 30 of them. How fun that you had these in your attic!

You certainly have had a long lasting love affair with French food - and these magazines look like great inspirations. The images remind me of recipe magazines my mum would've collected in the 70s also. She used to try and host dinner parties with different inspirations.