The Blue Train, The Orient Express, and Other Night Trains in Paris 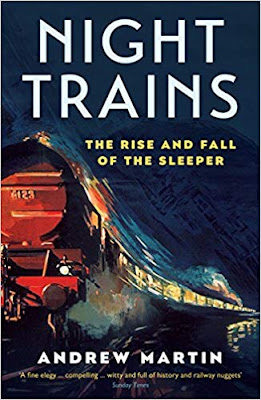 The first chapter of Night Trains: The Rise and Fall of the Sleeper by Andrew Martin (published 2017) is titled "The Blue Train," and it's all about Paris trains, Paris railroad stations, old disused railroad tracks visible in odd bits of Paris parks, and how all this has changed over the long history of the railroad. Later chapters also include voyages beginning in Paris, and descriptions of a variety of other European cities and their stations.

When it came to the trains themselves, the author's focus is on night trains -- especially sleeping cars. He writes:


"An article on the Lonely Planet website once described Paris as ‘the omphalos’ of sleeper trains, which was just the right word I thought (once I’d looked it up), and part of the attraction of the sleepers for me is that they start from my favourite city." (p. 26).

Somehow I did know that omphalos means belly button. And I learned as well that it referred specifically to "the navel of the world," a particular stone at the Temple of Delphi in Ancient Greece. But that's a digression, though it does fit with today as Wordy Wednesday.

Paris is always the center of something, isn't it!

Martin is especially interested in a particular train company, the Compagnie Internationale des Wagons-Lits et du Tourisme, which owned a number of particularly famous and often luxurious sleeping cars. Wagons-Lits were in use by French and other Continental railroad lines on many renowned train lines including the Orient Express. They dominated the sleeping car business from the late 19th century until around the 1980s.

These iconic trains were featured in many cultural works. "The first novel to exploit the racy reputation of the Orient Express was The Madonna of the Sleeping Cars, published in 1925." (p. 152). Much  more lastingly famous novels and films followed, with authors like Graham Greene, Georges Simenon, Eric Ambler, Ian Fleming, and Agatha Christie, and even a ballet titled "Le Train Bleu" in 1924, "performed by Diaghilev’s Ballets Russes, with music by Darius Milhaud, story by Jean Cocteau, costumes by Coco Chanel and curtain by Pablo Picasso." (p. 38). In the chapter on the Orient Express, Martin points out that the Gare de l’Est “is the setting, for example, of both Murder on the Orient Express and From Russia with Love.” (p. 133).

Paintings of railroad-related subjects in Paris is another of Martin's interests. I found the descriptions of some of the paintings especially intriguing, so I looked them up. Here are some of the works along with Martin's comments:

Martin writes: "The Pont de L’Europe has often been a vantage point for painters. In 1873 Édouard Manet painted The Railway, the composition showing a woman and a small girl in front of some severe black railings. Beyond the railings is large-scale modernity – the bridge, the tracks into St Lazare, the new flats overlooking those tracks – but all is confused by a cloud of steam. The little girl is interested in the scene, but the woman has turned her back on it, apparently in despair." (p. 28).

Martin writes: "Zola himself made Gare St Lazare the centrepiece of his novel, La Bête humaine. This is a hysterical tale of sex and violence, symbolised by the pounding of the engines between St Lazare and Le Havre, with which all the characters are connected." The cover of one edition of this novel is the painting "Le Pont de l'Europe" by Caillebotte, he points out. "There is a strolling flâneur, perhaps a depiction of Caillebotte himself. He is possibly eyeing up the man looking down on the station. The woman walking alongside the flâneur has been interpreted as a prostitute. It’s unlikely that both interpretations could be true. A dog is heading purposefully over the bridge in the opposite direction, and doubtless it, too, is going off to have sex."  (p. 29).

Martin writes: "In the late 1870s Claude Monet painted images of the same bridge and station. Both he and Manet followed Zola’s injunction to ‘find the poetry of stations as their fathers found that of forests and rivers’. But locomotives generated scenes that had something in common with forests and rivers: a fluid, organic element, arising from the play of light in the shifting steam." (pp. 28-29).

Besides discussing trains in film, literature and art, Martin describes quite a few of his own railroad experiences. In 2015-2016 he tried to travel on the few sleeper cars that still remained in service, especially a memorable night where the voyage was cancelled and he ended up sleeping on the train while it was parked in the station in Paris. I had never thought much about the Paris railroad stations, other than the re-purposed Gare D'Orsay, now a splendid museum, and the Gare de Lyon where my purse was once snatched. As he begins each over-night journey, Martin describes the current state and the history of these stations: "The Parisian stations were polished and set like so many jewels by Baron Haussmann, architect-protégé of that great rail enthusiast, Napoleon III. (p. 193).

There definitely was lots of luxury back in the real rail travel days! This tradition eroded as the trains became less and less desirable. The dining cars on these French-managed trains were of course legendary for their food, their atmosphere, and their decor. The author contrasts the former opulence with the pathetic food service he experienced on the twenty-first century trains he traveled on. He wrote:


"The head of the restaurant car was the maître d’hôtel, and crammed inside the kitchen was a brigade de cuisine, with a chef de cuisine in charge (a man often destined, in the first half of the twentieth century, to be headhunted by one of the better European hotels). He supervised an under-chef, a saucier and a plongeur, or washer-up. There would also be a couple of serveurs, or waiters." (pp. 15-16).

"Dinner on the original journey was served an hour and a half after departure – at 8pm. The restaurant car incorporated a gentlemen’s smoking salon with all the European newspapers, and there was further expensive marquetry, with scrollwork, cornices and gilded metal flowers protruding, and ‘rather garish’... paintings. The lighting was by gigantic –yet mellow –gas chandeliers. The meal involved nine courses: soup, lobster, oysters, caviar, fish, game, cakes, sorbets and cheeses." (p. 142).

Sleeping cars on trains starting in Paris went out of service for many reasons. The Orient Express lines became unworkable after World War II when the Iron Curtain, specifically in Bulgaria, cut off some of the routes. After that, air travel made long international overnight train voyages unappealing. Finally, the very fast trains that enable travel from Paris to French cities in only a few hours left almost nobody wanting to take any overnight trains. The end!

I wanted to share these Paris train stories with "Paris in July," a blogging event going on this month.

Note: images of artworks are from Wikipedia and the website of the British Museum.

I loved taking the train to and from Paris so this book sounds lovely to me. Omphalos is new to me as well. Great find!

I've always wanted to take a luxury train journey. I'm not sure if I'd love it or get bored after a while.

Such a fun post! And love the images you selected to illustrate it -- The Gare St-Lazare is just gorgeous. I remember sleeper service on trains, but never took one -- by the time I started traveling, air travel was becoming common (remember how students used to be able to fly standby for an inexpensive price?). Really interesting post -- thanks.

A luxury train ride would be amazing! What a fun post!

I love this. I can only imagine what it was like to travel on something like the Orient Express in its heyday. Elegant and beautiful, all sorts of interesting people. This sounds like an intriguing book. And I really loved the illustrations you chose. I might have to read this post again!

Mae, thank you for your visit to my blog. I didn't see your email to reply so wanted to leave a response here. I hadn't seen that painting but I love it! Thank you for the link. Paris is full of the most amazing art and has inspired it also.

What a fun post! I always thought it would be a fabulous experience to take the Orient Express. I've taken the bullet train, but never a luxurous overnight train. Wouldn't this be fabulous!

My sister in law is visiting right now from California. She travels to Michigan each year (and back again) by train. She absolutely loves it. I, personally, will stick to airplanes.

Great post Mae. I do love train travel, so much more of sight-seeing is involved, and a more relaxing way to travel.