A few days ago, I described the French cooking magazine Cuisine et Vins de France, which has published for over 90 years (link to post). For a long time, CVF was pretty highbrow, but it's now owned by the women's magazine Marie Claire, and seems to me to be targeted to fairly ordinary home cooks. I was especially interested in trying to learn about what these normal people are cooking and eating these days, as opposed to the very trendy or elaborate cuisines that are still being served in French restaurants that tourists frequent. On past trips, we've eaten at the homes of various friends so we've had an idea of the difference. French people of our acquaintance are usually much more interested in fine cooking than most Americans, but do not necessarily cook as if they were restaurant chefs -- obviously!

I mentioned that I was hoping to try a couple of recipes from their current online offerings. First I tried "La vraie recette de la salade césar" -- that is, "The authentic recipe for césar salad." The image of the dish from the magazine is above. For my second choice: a very simple dish of turkey cooked with mango slices and green peppercorns. In showing these, I've interspersed some of our other French or French-style dishes from the weekend as well. 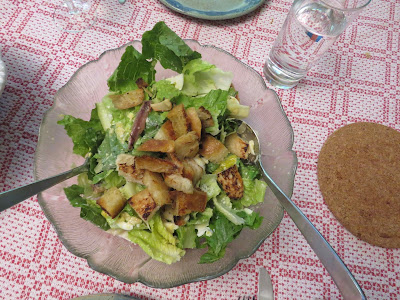 At the same time that I was making the salad, I made a second course: mushrooms on toast. The French are much more inclined to serve several courses in a home-style meal than we Americans are. They tend not to put nearly as many different dishes on the plate at one time, but to eat slowly and in a predictable sequence. The slower pace is sometimes thought to be one reason why French people are less likely to be obese than Americans, but that's not a for-sure explanation.


Another CVF Recipe for Another Dinner

The recipe title in French: "Magrets de canard aux mangues," that is duck breast with mangoes -- shown in the image from the magazine. I substituted a turkey breast from a local farmer because I couldn't find duck at the shop I went to.

I was impressed at such a good result from just four main ingredients: mango, turkey, vinegar, and green peppercorns! I had to add butter for frying the skinless turkey, which obviously has far less fat than duck with the skin on. Also, because the turkey was less moist, I degreased the pan with a splash of white wine -- not called for in the original.

A fascinating comparison Mae. Ive always found the French style of seperate courses to be an enjoyable holiday treat, but not something I can maintain in my 30 min lunch break at work. The turkey & mango looks yummy. Thanks Mae. Inspiring my plans for le quatorze juillet.

These look delicious, Mae. Especially with those mango slices. What a fun post!

Looks like a delicious meal. I will steal the Magrets de canard aux mangues for my French dinner. I just love duck. Thank you for the tip.

Fun post! I wonder about whether food magazines really reflect how people actually eat. I'm not reading any US food magazines these days (still bitter that _Gourmet_ stopped publishing), but when I glance through them at my dentist's office, I almost never see anything I'd be inclined to cook. I don't follow many French food bloggers -- I should make more of an effort to do so, because I think bloggers better represent how people actually eat day-to-day. Anyway, enjoyable read -- thanks.

My husband and his family lived in Paris for many years when my husband was young . I do notice that his mother prepares many courses that are presented beautifully, they eat slowly, and they never gain weight- I love the mushrooms on the toast !

I love a good Caesar Salad. Both recipes look delicious. ;-)

I went back to re-read this with more time to spare and really appreciate your detail in highlighting the differences -- not to mention your own cooking experiences. I remember being rather surprised (pleasantly) by dining in homes in France -- the order the food came and all. And you're right about the bread. But good for guys like Len (and Rick) for doing their best to bring the skill here!

The turkey with mango and green peppercorns looks and sounds delicious, especially for a summer meal.

I really enjoyed this post--interesting to hear how taste has changed in France over the years.

Good summer recipes! (I was out of town so I'm late to respond.)

I am intrigued by the turkey and mango recipe.I need to give that a try.
Your take was interesting about learning about what normal people in France are cooking and eating these days.
My husband and I enjoyed the salads in the Loire Valley so much on our recent trip. We had not heard of lambs lettuce and it was very good. We were not served that in Paris and looked in several small neighbor grocery stores for it and did not find it. Do you know anything about lambs lettuce?
Thanks for visiting me today. I have enjoyed scrolling through some of your posts.

@Bonnie -- names for lambs lettuce include mâche or corn salad.

Mangoes are part of The national diet here in The Philippines. In season you can buy a kilo of mangoes for about $1.OO. We have a huge Tree and we end up giving away left overs to feed pigs! Maybe part of why pork here is so good. Sometimes we bake a chicken with a mangoe in The cavity. The kitchen smells delightful. I want to try your Turkey recipe with chicken, Turkey is not part of national diet. I enjoyed your post a lot.