A Sad Day for Rosé

Like many Americans, we've been drinking rosé wines from France to cool off in the heat of this summer. At least we thought they were from France! If you have been drinking French rosé too, you  should read this: "How could 10 million bottles of cheap Spanish rosé be passed off as French? Blame America" in the Washington Post. From the article:


"France’s consumer fraud authority confirmed July 9 that over the past two years, unscrupulous wine merchants have passed off as many as 70,000 hectoliters — the equivalent of 10 million bottles — of cheap Spanish wine as more-expensive French rosé." 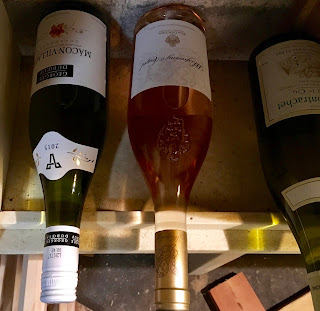 My first reaction was to try to find out if we were being fooled by the several bottles of wine that we've found very refreshing -- you can see one such bottle in our cellar in the photo, waiting to be enjoyed. Although I've read several articles in both the American and the French press, I'm suspicious that no one has yet named names so one can know which wines to buy (at French prices) and which ones to avoid (because they are really the much cheaper products of Spanish vineyards). All I know is that four French producers have been fined for the fraud, which affects as much as a quarter of rosé sold in France has been mislabeled.

According to website France-Amérique: "Criminal procedures were opened for unfair commercial practice. In the South of France, a Narbonne wine merchant who 'disguised' over 4 million bottles is now facing up to two years in prison and at least 300,000 euros in fines."

Another article (link) explains a bit more about how the French consumers have been misled: "The scam is all in the labelling. Sometimes the origin of the wine is hidden on the label, especially in rosé wine sold in boxes, while other labels will have a traditional French fleur de lys flower on the label and say 'bottled in France.' But that doesn't mean that the wine is French." Other misleading details: images of a French chateau or a French-looking village.

The French journal Le Parisien (link), in an interview with Ludovic Roux, a wine grower and head of a cooperative of producers in the Aude, provides a discussion of the challenges of trying to police fraudulent behavior. "La francisation, c’est de la fraude pure et dure. Mais pour les pratiques commerciales trompeuses, les choses sont moins claires. Nous voudrions qu’elles le soient à l’avenir!" -- or in English: Mislabeling wine as French -- "Frenchification" -- is fraud, hard-core fraud. But for dealing with deceptive commercial practices, things aren't so clear. We wish that they would become clear in the future.

This is the first year we've been drinking rosé in many years. We had moved on to reds and whites not only from France but also from California, South America, New Zealand, Australia, Italy, and a few other more obscure producers. But the large selection of rosé from just about all these places tempted us back to this hot-weather favorite, which is at the moment quite a fad here -- including a variety of "two-buck Chuck" from Trader Joe's, though the two-buck prices are kind of over these days.


Well, I hope you have a happy celebration for Bastille Day today -- and may all your wine be worth what you paid for it!
Posted by Mae Travels at 9:29 AM

Fascinating! This is our second summer on a rosé kick and we're enjoying them very much. Just checked the bottle we have chilling for tonight and it is, indeed, a product of France. I'll share the Post article with my husband.

Thanks for this, Mae. Very interesting and good research. I'm going to share this with my Corkie buddies!

FASCINATING! I just discovered French rose this summer (not sure why I never tried it before) and find it absolutely refreshing. I will pin this article for future reference - and do a bit of research on my own. Thank you for educating us.

I like Rose wine and I hadn't heard of this. Glad this scam was uncovered!

Well, I guess it's a good think I'm not a rosé fan. Interesting read, though.

Last night, I had my second bottle of rose in about 30 years! Now, I'm thinking it probably wasn't even French, which I specifically shopped for.

While it's winter here, and Rose isn't preferred in Winter, I'm fascinated by this Mae. However in Australia - I'm spoiled for choice and would prefer our local wines to French any day. A Rose always reminds me of summers spent in France - despite where its grown.

Interesting! We too like rose in the summer ... now I have to check our bottles! (I was out of town so I'm late to respond.)

Merde! I mean I hate paying for something and not getting it. I love French Rose so will try to read the bottles closer.