What did Balzac eat? 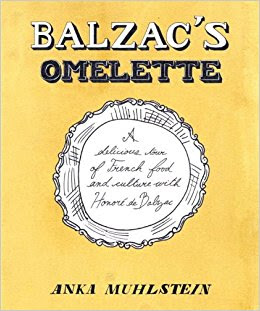 Balzac's Omelette is a delightful study of the food that nineteenth-century French author Honoré de Balzac (1799-1850) described in his many novels and stories, as well as his own rather eccentric eating habits. Author Anka Muhlstein, a native of Paris, provides just the right amount of background, as well as additional information about food as depicted by later French authors such as Flaubert and Zola. I really enjoyed reading it, and I suspect that the quality of this book is also due to the translator, Adriana Hunter. I'm only writing a very brief review here.

The following passage about a dishonest landlady in one of Balzac's novels illustrates Muhlstein's approach:


"Sadly, Cousin Pons and his friend Schmucke lack this attention to detail and knowledge of current prices when they try to keep an eye on their conceirge, Madame Cibot, who cooks their meals and, in so doing, leads them to ruin. She boasts to her husband that she has amassed two thousand francs in eight years thanks to her cunning and talent. In fact, rather than going to a butcher, she rummages through the stalls at a regrattier, who buys leftovers from nearby restaurants. With a fiercely discerning eye, she choose the best-looking debris of chicken or game, fish fillets, or even boiled beef, which she dresses up with finely sliced onion. Using this technique, she cooks such strong-smelling sauces that her lodgers never complain, and she makes them pay three francs 'without wine' for these dinners, a sizable sum if we consider that, in a modest but acceptable restaurant, a meal with a small carafe of wine cost a maximum of two francs." (p. 111)

You can see how Muhlstein selects food details to show a great deal about the landlady/concierge who serves repurposed food as if it were fresh. The entire book is full of captivating retellings of just the foodie parts of Balzac's great novels, offering lots of insight into how he used food to make his characters vivid.

One thing about this passage is the wonderful word regrattier: a dealer in leftover food from restaurants or from receptions or dinner parties in wealthy or aristocratic homes. This is strictly a French word, but I think we need to borrow it in English. I'm including it for Wordy Wednesday because it's such a great word.

Unlike in 17th and 18th century Paris, today's redistribution of previously offered foods is usually the work of organizations for feeding the needy. For example, Ann Arbor's Food Gatherers began in 1988 when volunteers "borrowed a van and collected 50 pounds of vegetables, bread, milk, and eggs from half a dozen grocery stores and restaurants. The food was quickly re-distributed to hot meal programs in Ann Arbor and Ypsilanti." (link) Today Food Gatherers still collects unused or nearly-out-of-date food, though it has many more sources including people's gardens and nationwide warehouses of food for this purpose.

Balzac's Omelette, which was published in 2011, includes some delightful illustrations. Here are two of them in color (though in the book the reproductions were in sepia tones).

I am glad food is not wasted but I'm not sure I'd want to frequent a regrattier to buy my food. What a great find!

Neat word, regrattier. I didn't know it. I'll have to ask Mrs KR if she knows it -- she was a French major in college. My French is pathetic, but I do know many of the food words/terms. I've tried to read Balzac but just couldn't get into him for some reason. My loss, I know -- Mrs KR tells me he's wonderful. Anyway, fun post -- thanks.

I'm surprised that I think I'd like this book but Madame Cibot serving repurposed food caught my attention. I love that more and more businesses are feeding the hungry with their leftover food.

regrattier is a great word - someone no doubt will second it soon for the name of their organisation - in fact I want to start a second hand food org just to be the one to use the name.

and the book sounds most interesting

Sounds like a sort of quirky read, interesting, esp with the word, "regrattier." A good thing. I'm reading "The Pot Thief who Studied Pythagoras." Great fun read and I love reading about that part of the country! Thanks again for reviewing it back when!

Great illustrations and it sounds interesting. Will have to check it out!

My husband is French and a big fan of Balzac- this might interest him.. thanks for the reveiw

I have a copy of this but never got around to reading it. I guess I'd better remedy that!