To Travel by Train

"There may be no better method of job creation ever invented than a railroad."
(from Train by Tom Zoellner, Kindle Locations 1026-1027). 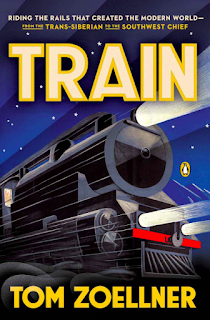 The railroad, invented in England, was a major development of the industrial revolution, specifically invented to carry coal from the mines, but soon put to many other purposes. At first sight, humans found trains with their huge engines unnatural and often terrifying. They had never seen such a source of steam and fire, and they had never experienced such incredible speeds -- over 10 miles an hour to begin, and becoming faster and faster.

In Tom Zoellner's book Train: Riding the Rails That Created the Modern World-from the Trans-Siberian to the Southwest Chief the early reactions are described in a quote from the historian Thomas Carlyle, who never forgot his first rail journey:

"'To whirl through the confused darkness, on those steam wings, was one of the strongest experiences I have experienced,' he wrote. 'Out of one vehicle into another, snorting, roaring we flew: the likest thing to a Faust’s flight on the Devil’s mantle.'

"These metaphors were dramatic, but they were correct in naming the railroad as an essentially chthonic machine, born underground. The primary fuel for its engine, the most important cargo, its entire economic reason for being— all of these critical elements were a direct result of the velvety rock that lay in shallow deposits under the soil of northern England." (Kindle Locations 379-383).

"Chthonic" is a vivid and obscure word that refers to Greek gods or other spirits or demons that inhabit the underworld. Zoellner often choses such words to portray the effect of trains on a variety of countries and cultures. Railroads, as he documents them, have become important factors in these countries' economy, their landscapes, the creation of their cities, the transport of goods, their access to a varied diet, and the movement of people.

Zoellner talks about the 19th century railroad barons who made huge fortunes and then maybe lost them, but whose successes shrank the continents. He also talks about modern developments of bullet trains, and modern neglect of some of the once great passenger lines such as Amtrak and English rail lines. He discusses some of the famous palatial railroad stations and what's become of them. With great insights, I think, he discusses the force of the railroad as a way to create employment and contribute to economic well-being. Of freight trains he writes: "a central truth about the railroad: there remains no better mechanism for hauling heavy commodities." (Kindle Locations 3948-3949).

The heart of the book, however, is Zoellner's love of passenger trains. In each chapter he concentrates on his own personal journey on a train line of his choice. He weaves his experiences with the history and economic development of the rails in that country. In the UK Zoellner went by train from the north of Scotland to the farthest south he could. In the USA he traveled by the Acela from New York to Washington, DC, and then on Amtrak all the way to Los Angeles. In China he took the incredible rail line to Tibet. In India he experienced the national railway's filth; he witnessed its vast commitment to using human labor and not automation. In the Peruvian Andes he rode on the steepest train tracks on earth. Zoellner attempted the famous train ride from European Russia to the end of the trans-Siberian railway; however, his voyage was interrupted when a potentially rabid dog bit him and he rushed home for preventative treatment. All fascinating.

Zoellner's descriptions make his experiences vivid. He says little about the food (on Amtrak, he recommends the dining cars not for the cuisine, which he finds "reliably mediocre," but as a place to find people to talk to; in other countries, it's worse). But his descriptions of the aromas, odors, smells, and stinks of trains throughout the world are very revealing! Here are a few of his descriptions, including olfactory ones, to give you a sense of this enjoyable book:


"The Northeast Regional train to Washington lay idling like a silver python. I stepped onto it and immediately smelled the unmistakable fragrance of Amtrak: blue toilet fluid, old socks, a lacing of diesel fuel." (Kindle Locations 1720-1721).

"Practically every rail journey from Moscow through Siberia starts from Yaroslavl station, a handsome hulk built in 1904 and designed to look like a Russian Orthodox convent. ... The bunks were coated in vinyl and padded with approximately two micrometers of stuffing. .... Though the train was not yet moving, a strong odor of coal smoke and human body pervaded the carriage." (Kindle Locations 3005-3015).

"Laziness and dissipation are inevitable on the Trans-Siberian.... I had grown used to the smell of sour feet and onions and had done as almost everyone else was doing by the way of meals— that is to say, avoiding the dining car. Instead I bought cartons of sodium-soaked ramen noodles from the babushkas who gathered by the tracks." (Kindle Locations 3140-3146).

"Riding through the Tibetan plateau inside a train compartment feels like cheating. ... All a traveler needs to do these days is gaze out the window at the unfolding subarctic plain where he never belonged but nevertheless has a kind of unlikely intercourse. ... A woman in a hooded garment was bending over to pick up a disk of yak dung which is used as everyday household fuel. I smelled some in a fireplace later, and it burns as clean and odorless as balsa wood." (Kindle Locations 3773-3784).

"We soon came to the town of La Oroya [Peru], which is one of the filthiest places I have ever seen. The cliffs surrounding the town have been wiped clean of all vegetation and sport a bizarre white coating that looks as if ten billion tons of bird guano or cake frosting had been dropped on them and slowly oozed downward. This is the remnant of the sulfuric-acid clouds from a nearby smelter. ... A waiter came out to the back porch to serve cups of tea brewed from coca leaves, and it numbed the inside of my mouth. The air smelled of wet grass and fresh metal, and as we climbed, the sky became a weird pastiche of angled sun and clouds and snow." (Kindle Locations 3998-4018).

In my own life, I've had a few memorable train trips. Zoellner inspired me to think about trains I have known.

In St. Louis, I was introduced to trains as a child, specifically by my first train trip which was 8 minutes long. We went from the Wabash Station at the west edge of the city to the big, downtown Union Station, an introduction thought up by a friend of my father. She accompanied me and my sister on this exciting first trip while my father dropped us off at the Wabash Station and then drove downtown to pick us up. Also, I remember the beauty of the sculpture by Carl Milles which still stands in front of the station, though it's now mainly used for other purposes.

In the last several years, I've been lucky to make some interesting train trips. One was from Warsaw to Krakow and back the same day -- a very long day! On a different trip to Europe, I traveled by TGV (the French bullet train) from Paris to Avignon, on to Arles, and then back to Paris. In 2014 I enjoyed a beautiful train ride beside the Pacific Ocean from Santa Barbara to Delmar near San Diego and back. I also had a tormented night on a very late train from Germany to Paris, where our reserved seats were taken by other passengers. I don't think I'd have the patience or the nerve to do the ambitious train travel that Zoellner did, but I loved reading about it.
Posted by Mae Travels at 6:00 AM

We really enjoyed traveling by train in England and we were amused by how often the British complained about their system. It's so much better than we have in the US!

There's a light rail station near Union Station, so I get there once in a while on the Metrolink. I took Amtrak from St. Louis to Kansas City a few years ago and enjoyed it, but I started at the Kirkwood station since that's where I live!

I love our train system in the UK and like Joy notes above, don't understand when people complain! It has its flaws but it's pretty impressive overall.

We will be riding the train from Rome to Lucca, from Lucca to Florence, and then from Florence to Rome. I can't wait!

Thank you for sharing this book with us.

We will be riding the trains quite a bit when we go to Italy in two weeks. I am looking forward to it.

Thank you for sharing this book with us!

I seem to be having trouble posting.

Very interesting, have to check out the book. We have commuter trains here all day in town and freight trains during the night. Bill was in the train industry and managed the fleet of heavy-duty equipment. Trains of all kinds fascinate me and I love hearing the train whistles here at night when the wind is blowing in our direction. Trains in Europe are great, rode them every day when we lived there and to travel. Good post!