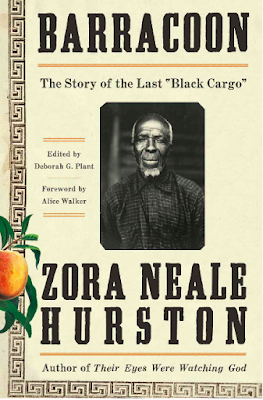 Barracoon: The Story of the Last "Black Cargo," a newly published work by Zora Neale Hurston, tells a horrifying story. In 1927, Hurston spent many days with Cudjo Lewis, whose original name was Kossola. He was born in Africa, and at that time was the last surviving former slave to have experienced the passage from Africa to the United States. Shockingly, the voyage that brought Kossola to Alabama actually occurred during the Civil War when the institution of slavery was in the process of being abolished.

Zora Neale Hurston (1891-1960) was an anthropologist and novelist, writer of several successful and still-classic books. Unfortunately, publishers rejected this work, and it's just been released for the first time this month.

The first thing I learned while reading Barracoon was the definition of the word in the title. This word, barracoon, very poignantly embodies the cruelty that slavery implies. Here is the definition given at the beginning of the book:


"Barracoon: The Spanish word barracoon translates as 'barracks' and is derived from barraca, which means 'hut.' The term 'barracoon' describes the structures used to detain Africans who would be sold and exported to Europe or the Americas. These structures, sometimes also referred to as factories, stockades, corrals, and holding pens, were built near the coast. They could be as insubstantial as a 'slave shed' or as fortified as a 'slave house' or 'slave castle,' wherein Africans were forced into the cells of dungeons beneath the upper quarters of European administrators. Africans held in these structures had been kidnapped, captured in local wars and raids, or were trekked in from the hinterlands or interior regions across the continent. Many died in the barracoons as a consequence of their physical condition upon arrival at the coast or the length of time it took for the arrival of a ship. Some died while waiting for a ship to fill, which could take three to six months. This phase of the traffic was called the 'coasting' period. During the years of suppression of the traffic, captives could be confined for several months." (Kindle Locations 14-22).

Kossola, or Cudjo, told Hurston his story of his life as a boy in an African village, his subsequent capture by men from Dahomey, the trek through the jungle, his confinement in the barracoon, how he was shipped across the ocean, his life as a slave in America, and the challenges of life as a free man after the Civil War. She transcribed his accented English phonetically, and followed his wishes to tell the story in the order that he chose, beginning with the life of his grandfather.

I find his narrative of imprisonment in the barracoon and then crossing the ocean so moving and vivid that I'm just going to quote a long passage of excerpts without trying to comment:


“When we git in de place dey put us in a barracoon behind a big white house and dey feed us some rice.

“We stay dere in de barracoon three weeks. We see many ships in de sea, but we cain see so good ’cause de white house, it ’tween us and de sea.

“De barracoon we in ain’ de only slave pen at the place. Dey got plenty of dem but we doan know who de people in de other pens. Sometime we holler back and forth and find out where each other come from. But each nation in a barracoon by itself. ...

“Dey takee de chain off us and placee us in de boats. Cudjo doan know how many boats take us out on de water to de ship. I in de last boat go out. Dey almost leavee me on de shore. But when I see my friend Keebie in de boat I want go wid him. So I holler and dey turn round and takee me.

“When we ready to leave de Kroo boat and go in de ship, de Many-costs snatch our country cloth off us. We try save our clothes, we ain’ used to be without no clothes on. But dey snatch all off us. Dey say, ‘You get plenty clothes where you goin’.’ Oh Lor’, I so shame! We come in de ’Merica soil naked and de people say we naked savage. Dey say we doan wear no clothes. Dey doan know de Many-costs snatch our clothes ’way from us. ...

Barracoon is a remarkable book. I find it amazing that it took so long for publication. While reading it, I am constantly thinking about how the horrors of slavery continue to haunt our society, how the legacy of inhumanity and racism keeps inspiring vicious attitudes and degrading behavior in a painfully large percent of our citizens.
Posted by Mae Travels at 12:08 PM

Wow! What an emotional read this must be! I may end up reading it.

I am glad this story was written for future generations to witness the cruelties of that part of history.

I loved Their Eyes Were Watching God, but I think this one sounds like too tough a read for me.