Pythagoras Meets Tamales and Tuna-Noodle Casserole and Solves a Mystery

"Better to die happy than thin." (Quote from The Pot Thief Mysteries Volume One, Kindle Locations 644-645).

"Tequila is now one of the most popular distilled spirits in the United States, but I wonder why people in Boston or Birmingham like it. Its prime appeal to me is that it tastes like the desert— saline, organic and slightly viscous like the juice of the cactus it’s distilled from." (Kindle Locations 388-389)

"I am awe-inspired by Pythagoras’ insight. You may find it confusing or even boring. Some people are awe-inspired by majestic mountains, some by poetry and others by abstruse mathematics. But whatever the source, we all need a little awe in our lives." (Kindle Locations 3068-3070). 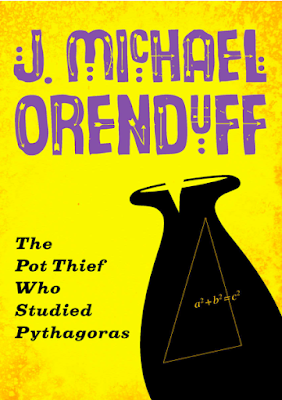 J. Michael Orenduff in The Pot Thief Who Studied Pythagoras, has written a delightful crime novel set in Albuquerque, NM. It's full of variety, as illustrated by the above quotes. When the novel's narrator Hubert Schuze is not participating in a scheme to illicitly obtain a 1000 year old Indian artifact from a local museum he might be legitimately helping authorities solve a murder. Throughout the novel, he's reading "an anthology of articles about Pythagoras."

Further, Schuze loves Mexican food such as an "entire sack of breakfast burritos, a quantity so large it took half a bottle of New Mexico’s finest champagne to wash them down properly." (Kindle Location 530).


"I set the oven on warm and placed a plate inside with two corn tortillas. I broke two eggs into the frying pan and cooked them over-medium with a pinch of cumin. I placed the eggs over the tortillas, poured on green chili sauce, sprinkled queso fresco on top and returned the plate to the oven. While the cheese melted, I extracted a bottle of Gruet Blanc de Noir champagne from the fridge and filled a flute." (Kindle Locations 1031-1034).

Here's how he describes his normal eating habits:


"I believe in starting the day with a hardy breakfast, meaning loaded with carbohydrates, animal fats and red or green chili. I may eat an avocado or a mango during the day, but I usually don’t have another meal until after the cocktail hour and often have both in the same chair. ...

"I walked over to Dos Hermanas Tortillería at five .... As the name implies, it started out as a tortilla factory. In New Mexico, that means they sell mainly tamales and posole. And you probably thought they sold tortillas. Well, they sell a few, but the ones in the grocery stores are cheap and good, so most people no longer buy tortillas at a factory.

"Tamales, on the other hand, are a pain in la cola to cook, so people buy them at their local tortilla factory. The ones at Dos Hermanas are to die for, and considering how much lard goes into the masa, that may be literally true. The masa in a Dos Hermanas tamale is like a Mexican Rolaids— it will absorb up to forty-seven times its weight in stomach acid. Or Drano for that matter." (Kindle Locations 633-641).

Well-crafted Margaritas are the cocktail he most likes to drink, though he mentions a few others -- he's usually quite a food lover. He quite thoroughly describes a meal of sage hen, a game bird, stuffed with morels. This dish he eats with a lawyer at the lawyer's country club. He hears about another meal of very trendy food that he disdains at "one of those places where the food is supposed to reflect a philosophy," but the philosophy in question is nihilism. (Kindle Locations 2129-2130).

Alternatively, Schuze makes terrible coffee for the customers in his not-very successful Indian ceramic shop.  And on a few occasions, he eats dubious casseroles made by Miss Gladys Claiborne, his elderly neighbor: a lovable stereotype. For example she gives him this wide-eyed run-down on her tuna casserole when he tells her she shouldn't have gone to all that trouble:


"'It was no trouble at all. You start with canned tuna. I always use solid albacore. Then you combine it with noodles, chopped green onions, a can of cream of mushroom soup and a package of grated cheddar and bake it in the oven.' Her pale blue eyes sparkled as she added, 'Since we moved out here, I sometimes put a can of green chili in it.'

"I took a forkful of it. It wasn’t bad. But with every bite I kept thinking of all that mercury lodging in my brain." (Kindle Locations 618-621).

On another occasion, he avoids Miss Claiborne's chicken tenders casserole ("a piece of the chicken I am not familiar with") but is forced to eat lime jello with crushed pineapple and miniature marshmallows. Much later, she brings another casserole to a potluck: "a steaming chafing dish full of Summer Squash Pie courtesy of Nuestra Señora de Los Casseroles" which contained frozen squash, crushed Ritz crackers, and more. (Kindle Locations 3047-3048).

Hubert Schuze is clearly an intriguing and likable character. He's anti-establishment, and he doesn't agree with the law against digging up ancient Indian pots on public land, but he's very much against digging on Indian land or most other types of crime. As a result, he cooperates with the authorities -- sort of. He's also a skilled potter himself, and can make a mean copy of a historic pot.

I'm avoiding retelling the quite suspenseful and entertaining story of the various museum pieces that appear and disappear during the course of the mystery, or of giving away the identities of the murder victims and perps because I don't like spoilers. But I'm thrilled to have learned about this delightful mystery series -- thanks to Evelyn!

Oh, yes, here's one more food description of a recipe from Schuze's old family friend Consuela that I couldn't resist. I might even try it:

"She made her corn and poblano soup. In one pan, she sautés chopped onions, poblano peppers, garlic and cumin. In a separate pan she uses a big knife to slice the kernels off ears of fresh corn into hot lard and then stirs like crazy until the corn softens. Then she combines the contents of the two pans in a large stockpot, adds chicken broth and lime juice and lets it simmer. When all the flavors have combined, she takes the pot off the heat, throws in fresh oregano and crema Mexicana and lets it sit two or three minutes before ladling it into bowls. She serves it with warm corn tortillas and cucumbers slices sprinkled with chili powder and pilon sugar.

"Emilio and I both had four bowls of it and Consuela beamed with each refill." (Kindle Locations 1614-1620).


Update: I have now read the second mystery in the "Pot Thief" series, and I do not recommend it at all. The author re-used all the jokes and the descriptions of the supporting characters, and did not do as good a job with plot and other details.
Posted by Mae Travels at 4:46 PM

This looks like a FUN book! Terrific review -- you make me want to read this. I don't believe I've ever added cumin to scrambled eggs, but it's a wonderful idea -- will try that. And yes, tamales are a real pain to make -- although most restaurants around here serve pretty bad examples. Although several weeks ago I had a tamale at Publico (on the Loop) that might be the best tamale I've ever had anywhere. Anyway, super post -- thanks.

Well, this is a must read! A little mystery, good food, esp breakfast and good booze! Wonder what that piece of chicken was... Schuze sounds intriguing for sure. Thanks for the review, you always do them well!

Hi Mae, I thought I would let you know about a linkup to which many of us attend each month called Foodies Read and hosted by Based on a True Story. Each month we post about novels, memoirs, cookbooks, biographies, etc. If there is food or if it inspires us to get into the kitchen we post about it so others know. I think you might enjoy it AND Heather, host of Foodies Read, also has giveaways each month for those who link up. Thanks for stopping by my blog at A Day in the Life on the Farm.

Hi Wendy,
Thanks for sending me to the linkup for food in books! I've read quite a few food books this month, and I'll link one or two of them. I'll keep looking at your blog as well, as you do post some great recipes.

I like the quotes at the start of your review. Also I like a mystery with some food involved.
Your photo of Albuquerque is appealing too. We’d love to travel out west one day.

Whoa Mae! Sounds like my kind of book. Also I was just thinking of making some spicy scrambled eggs, and cumin would help, along with some mustard greens:)

I'm starving after reading all those food excerpts! Sounds like a very tasty read.

I'm so glad to see that you joined us over at Foodies Read. Looking forward to reading more of your reviews.