A childhood memory of a meal in Morocco: 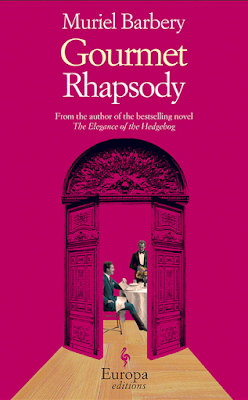 "I will, at least, have had the opportunity to recall this: the grilled meat, the mechouia salad, the mint tea and the cornes de gazelle. I was Ali Baba. The cave of treasures: this was it, the perfect rhythm, the shimmering harmony between portions, each one exquisite unto itself, but verging on the sublime by virtue of the strict, ritual succession. The meatballs, grilled with the utmost respect for their firmness, had lost none of their succulence during their passage through fire, and filled my professionally carnivorous mouth with a thick, warm, spicy, juicy wave of masticatory pleasure. The sweet bell peppers, unctuous and fresh, softened my taste buds already subjugated by the virile rigor of the meat, and prepared them for the next powerful assault. Everything was there in abundance. ... When at last we were sated and somewhat dazed, we would shove our plates away and look in vain for a back to the bench so that we might relax; the waiter brought the tea, poured it according to the established ritual, and on the table, which had been only haphazardly wiped clean, he set down a plate of sugar-covered crescents, the cornes de gazelle. No one was the least bit hungry anymore, but that is precisely what is so good about the moment devoted to pastries: they can only be appreciated to the full extent of their subtlety when they are not eaten to assuage our hunger, when the orgy of their sugary sweetness is not destined to fill some primary need but to coat our palate with all the benevolence of the world." (Gourmet Rhapsody, Kindle Locations 160-172).

Vivid food descriptions like the one quoted above are the center of interest in Muriel Barbery's novel Gourmet Rhapsody. These passages represent the inner thoughts of a dying man; the specific memory above concerned his childhood meals while visiting relatives in his mother's native country, Morocco, which is also the birthplace of the author.

As a radical and influential food critic, this character had spent his life expressing thoughts about what he ate. On his deathbed, thoughts of many things that he had enjoyed eating rushed through his head as he tried to imagine one special taste from his past. Each chapter of the book represents one stream of consciousness from his mind or from the mind of another character that is somehow connected to him and to his immanent death; no character is aware of the inner thoughts of any other. What a strange premise for a novel!

The dying food critic also recalls many tastes and food experiences from his life in France and his adventures as a professional eater. Another of this character's memories:


"I bit into the fruit, I bit into the tomato. In salads, baked, in ratatouille, in preserves, grilled, stuffed, cherry, candied, big and soft, green and acidic, honored with olive oil or coarse salt or wine or sugar or hot pepper, crushed, peeled, in a sauce, in a stew, in a foam, even in a sorbet: I thought I had thoroughly covered the matter and on more than one occasion I wrote pieces inspired by the greatest chefs’ menus claiming that I had penetrated its secret. ...

"Sugar, water, fruit, pulp, liquid or solid? The raw tomato, devoured in the garden when freshly picked, is a horn of abundance of simple sensations, a radiating rush in one’s mouth that brings with it every pleasure. The resistance of the skin— slightly taut, just enough; the luscious yield of the tissues, their seed-filled liqueur oozing to the corners of one’s lips, and that one wipes away without any fear of staining one’s fingers; this plump little globe unleashing a flood of nature inside us: a tomato, an adventure." (Kindle Locations 440-452).

Could this only be written by a French person? Impossible to say, but stereotyping of French attitudes would lead to this idea. In fact, I came across this novel when pursuing my current project of finding out what French people read and write when they read and write about food. I'm looking at it as a source of insights into a perhaps different mindset than that of Americans who write lovingly about Paris restaurants and Provencal romantic getaways.

Muriel Barbery became famous around a decade ago for her novel, The Elegance of the Hedgehog, which takes place in a Paris apartment building. This apartment building on rue de Grenelle in Paris is also the site of Gourmet Rhapsody.  As I've been reading this earlier novel I've enjoyed Barbery's perspective on many things and her skillful and terse way of portraying characters from their inner thoughts. She's an interesting author, whose work obviously appeals to readers in many countries.
Posted by Mae Travels at 4:34 PM

I loved "Hedgehog" and her writing style. Thanks for alerting me to this one. It sounds delicious!

I too liked Hedgehog; I'll have to add this to the old wish lsit.

Wow, what great mouthwatering excerpts dripping with sensory detail! Not familiar with this author and am now anxious to read her books.

I liked her earlier book much better. My review of this one, posted last year: http://honeyfromrock.blogspot.com/2017/04/a-not-so-rhapsodic-gourmet-rhapsody.html

My stomach actually grumbled while reading the excerpt at the beginning of your post Mae. Thanks for the review.

Hi Claudia -- You clearly had a more encompassing view of this novel than I did. I ignored the character flaw of the central figure and mainly focused on his thoughts about food. But you are right, he was not a nice person at all and nobody liked him...... mae

I am on my way to a Moroccan restaurant tonight to celebrate my husbands' 70th with our kids and grandkids We adore the atmosphere, the food, and the entertainment!!

Great review. I really enjoyed this too. I love vivid food writing, and my guilty pleasure is reading books from the point of view of horrible people, so it was a win-win for me.

I couldn't quite get into "Hedgehog" so I don't know if this one will go up on my to be read list but a well thought out review. Thanks for sharing.