The New and the Old in my Kitchen in May

In my kitchen this month: Len is the bread baker here, and has been experimenting mainly with rye bread. While the Dutch oven is new, the frying pan is very old -- it belonged to my grandmother and then to my mother. It's been out of service since I bought a smooth-top range, and has now found a new use. Although the blogger event "In My Kitchen" is normally about what's new in peoples' kitchens, I'm also going to talk about some old and repurposed items.


Originally this was a punch bowl, but we haven't used it for many years. If we ever have a large party again, no punch will be served. 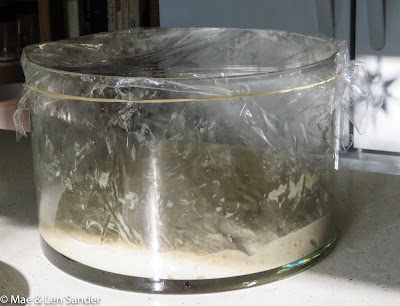 The bowl has now been repurposed as a dough tub; the dimensions are exactly the recommended size for use in baking. The straight sides enable the baker to measure just how much the dough has risen. In the photo is the newly-made dough, which rose to more than 3 times the original volume. 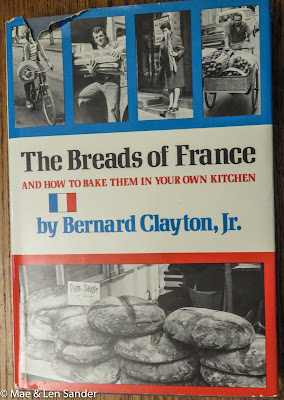 Len is using several books as a source of recipes, ideas, and methods. Above: The Breads of France by Bernard Clayton, Jr., a 1978 compendium of bread recipes from many bakeries in France which has been on our shelves for many years. We're newly interested because of the bread-baking project.

This not-so-successful bread, from an online King Arthur Flour recipe, was baked on a pizza stone that my sister gave us as a gift last winter. More repurposing: a wooden place mat becomes a peel for the loaf. After this first attempt, Len soon chose a different recipe from Flour Water Salt Yeast -- it was beautiful:

Also in the Kitchen in May: A Low-key Celebration of the Royal Wedding 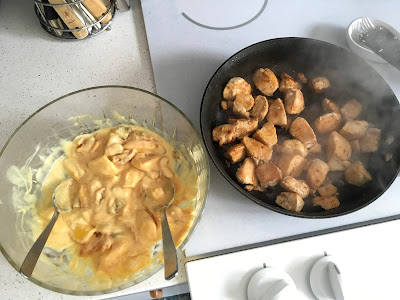 We didn't eat much while watching the wedding since it started at breakfast time. But the day before the wedding, I tried an appropriate recipe for lunch: Coronation Chicken. This dish was served at the coronation of Elizabeth II. Basically it's chicken with fruit, usually mango and apricots, in a curry mayonnaise. Shown here: the fruit mixture and the sautéed and spiced chicken breast cubes, ready to be tossed together.

OK, a wedding is not a coronation, but I thought it was in the spirit of the celebration. I know some people baked elderflower-flavored cake to be like the royal wedding cake, but that's not my kind of thing.

I'm really not much of a collector of memorabilia, but here are a few choice items commemorating British royalty that happen to be in my kitchen: 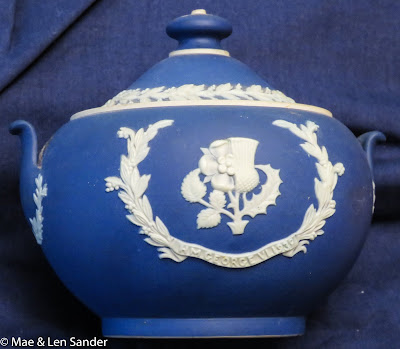 One more royal souvenir: a Wedgwood sugar bowl commemorating a 1939 visit to Canada of King George and Queen Mary, the great-grandparents of the current royal bridegroom. This was originally a wedding gift to Elaine's mother-in-law. Elaine gave it to me a few years ago because I have a tea pot in the deep-blue Wedgwood pattern, though not a commemorative item.

"In My Kitchen" is brought to the blogging community by Sherry, who blogs from Australia at Sherry's Pickings. WHY "SHERRY'S PICKINGS"? she asks. Her reason: "I am Picking out all the best things in life." To see the best things that Sherry and other bloggers throughout the world have in their kitchens this month, link here: http://sherryspickings.blogspot.com/

i agree Mae, life is way too short to iron tea towels. thank you for joining in again this month. great to have you. all those breads look marvellous. i'm not much of a baker especially breads. i find them a bit frightening - all that yeast:) just a bit of FYI - i am having problems with blogger and inlinkz since the new data protection laws came into play on the 25th so your post won't show (yet!!) as part of the link on mobile phones. it has worked on my PC and ipad so don't panic, but i can't see it on my iphone. i will keep trying to find out what has happened. something to do with security and third parties' info. grrrr. so frustrating. anyways, cheers for now sherry x

I like that book The Bread Bakers Apprentice and have checked it out if the library a few times. Lovely bread Len makes. I use primarily the King Arthur brand of flour and have called their hotline for help a few times too. Nice Dutch oven. Mine is red.

Wow Len's bread baking looks impressive and I am sure your kitchen is smelling good. The straight edges bowl to measure the rise of the dough is clever - I sort of look at the dough but am never 100% sure how much it has risen. I love all your royal wedding musings - we have the same william and kate tea tin.

I have all those cookbooks! I'm surprised the KAF recipe didn't work. I usually have excellent luck with them.

Impressed with Len's breads! Enjoyed seeing your tea towels and royal memorabilia. I don't iron my tea towels either:).

So great to have a resident bread baker. I'm the one here, and today making char sui bao - those tasty little buns with some of my left-over pulled pork.

I watched the wedding as well, wearing my favorite fascinator, and with a glass of wine, on the Royal Family's FB page later in the day. They did a great job filming.

What a magnificent and cheerful blue color pf your dutch oven! ! How lucky you are to share your kitchen with such a great bread baker.

I have some of my mother's tea towels - Irish linen and still immaculate after more than 50 years. Hard to get good quality ones these days. Cheers

Love it! I cook over a flame, so I continue to use my favorite cast-iron skillet, but nonetheless, I keep it stored in the oven, where it helps regulate the oven temperature when it's not in use on the stovetop.

It looks like a good of good things are happening in your kitchen this week. ;-)

What a great idea to use a bowl with straight side for the dough. Never thought of that. I shall have to look out for one :)

I love seeing your bread making tools/processes. I dabble but with a dodgy oven, don't have very good results lately. I've never heard of coronation chicken, it sounds interesting though and will have to look for a recipe to try it sometime. =)

You are a master baker, Mae. Love all the royal "stuff" on display. I would love to get back into baking. Priorities, right?

I don't iron my tea towels either and I love both those but especially Windsor. Hope I can find that one when I'm there! And thanks for the book recommendations. Possible Christmas gifts for Rick? Definitely I'll be sharing this post with him. Yet another reason I think he and Len might get on!