"In the first half of the nineteenth century, a revolution occurred in the preparation of breadstuffs. Once they escaped the limitations of yeast, American women were free to experiment, innovate, and create new kinds of food, removed from religion. This culinary revolution started with cake." (The Baking Powder Wars, p. 17)

"What [Michael] Pollan sees as a positive reversal of industrialism is a burden the nineteenth-century women were elated that baking powder, industrialization, and corporate America had lifted from them." (p. 184)

Served at afternoon tea or evening social events in the 19th century, sweet, soft layer cakes or molded cakes changed American tastes. These were made to rise with baking powder rather than yeast or beaten eggs, and were much easier and faster to make at home. The bundt pan, as shown in the photo, became popular in mid-20th century America, though tinsmiths made similar cake molds in the 19th C.

In the book Baking Powder Wars: The Cutthroat Food Fight that Revolutionized Cooking, author Linda Civitello shows how the popularity of such cakes was closely related to changes in household management, to expectations of how to be a good middle-class wife and mother, and to other social changes. Technology also enabled increasing availability and lower cost of high-quality wheat flour, which contributed to the ease of home-baking as well. Thus: an industrial revolution in the kitchen!


In 1796, Amelia Simmons first used the word "cookie" for round biscuits made with pearlash, a predecessor to baking powder. Throughout the 19th century, more and more types of cookies appeared in cookbooks and ladies' magazines as the effectiveness and ease-of-use of baking powder developed. You could say the peak of invention in cookies was the Toll-House Cookie, invented in 1931. Both modern baking powder, invented by chemists and industrial food manufacturers in the 19th century, and chocolate chips, also effectively an industrial product, made this recipe possible for easy baking.

Look at the pancake, another food that changed and became typically American. As illustrated in this seventeenth-century painting, and as reflected in events such as pancake-flipping races the day before Lent, pancakes are highly traditional in Europe and have been made for centuries. However, the expression "flat as a pancake," which Civitello quotes often, points to the change that happened when baking powder became available, and American pancakes began to be high and fluffy instead of flat. 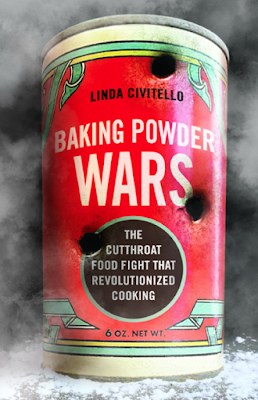 Question: What do all these breadstuffs -- cookies, layer cakes, cobblers, biscuits, fluffy American pancakes, cake donuts, muffins, cornbread, and more -- have in common?

Answer: Baking powder is responsible for their unique texture, flavor, and ease of baking. It's the "indispensable, invisible ingredient." (p. 187) Further, they are all in fact American food innovations.

We think of these items as home made and traditional, but in fact their history is not as old as all that. Baking powder is a 19th century invention, and so are all the recipes made with it. Linda Civitello tells this story, beginning with descriptions of the hard labor needed to make bread from yeast or to enable cakes and biscuits to rise by other means -- but nowhere near as quick and labor-saving as baking powder. Yes, you could beat eggs for an hour to get a nice fluffy cake. Yes, you could make "beaten" biscuits, which required someone in the kitchen to beat the dough with a rolling pin for hours. (Hint: these were a popular Southern food. The person doing the beating was often a slave, or after the Civil War, a very poorly paid black servant. Civitello is always highly aware of the role that slavery and later racism played in the development of American cuisine.)

Baking powder is made from baking soda (sodium bicarbonate) and another rising agent, which varied during the time when the product was being developed; at first the two elements had to be added at different times in the mixing process, and timing was critical. Several chemists worked in laboratories and then invented industrial processes to deliver an easily usable product to home bakers and commercial bakers.

Big business always was responsible for baking powder. Several corporations with very colorful owners and promoters were rivals in an effort to corner the market for this profitable product. In the course of their rivalry, they engaged in some amazing antics. For example, one baking powder manufacturer bribed virtually every member of the Missouri legislature in the late 19th century to enable passage of a law prohibiting the key ingredient used in the products of other baking powder manufacturers. The "baking powder wars" involved early food and drug regulation, bribery, both national and state-level politicians, and many other fascinating machinations, made most vivid by Civitello's narrative.

The Baking Powder Wars is full of wonderful nuggets of food history and cookbook history, as well as industrial history. In the twentieth century, more and more cookbooks and recipes called for baking powder, which was not a standardized product until remarkably late. Civitello traces the way that baking powder took over most baking recipes in popular sources, especially The Joy of Cooking, first published in 1931 and revised many times into the 21st century. She also illustrates how the use of baking powder changed baking methods in other cultures, such as Hispanic cuisine in California and baking of traditional German biscuits that were previously raised with non-chemical leavening methods. And she lists how fast food makers use baking powder biscuits and similar foods -- just think of the Egg McMuffin!
Posted by Mae Travels at 7:23 PM

Mae,
Thanks for another informative post; your photo of a cobbler led me to try my hand at one, this to use up our current stock of apples.

Sounds like a terrific book! Kinda sorta knew the history of baking powder, but never thought through how much it changed home cooking. Fascinating stuff -- thanks.

Good interesting post, Mae! I did know some of this as I was reading about the difference between baking powder and soda. Baking powder is a wonderful thing, now we can easily bake a good cake and all sorts of treats. Thanks!

Who knew baking powder was so important to so many yummy foods! That sounds like an interesting book.

Very interesting! So one might say that cookies came about through all of this. I guess sugar wasn't always the bad guy? Sound like baking powder definitely changed the modern baking scene!

Sounds like baking powder contributed as much to the modern baking scene as cheap sugar. Who knew?

This sounds fascinating. And, I might add, you read the most interesting books!

Very interesting! I knew a little about the development of baking powder but not all the competitive stuff and drama around it. Thanks for sharing!

Thanks for the interesting post -- we take baking powder so much for granted so it's good to know how revolutionary it was.

Very interesting read- never thought about how baking powder really made some major changes in baking..

that is really interesting Mae. i had never thought about baking powder before at all. how fascinating that it freed women up by virtue of its ease of use. cheers sherry

this is fascinating - I have never thought of baking powder as being such a powerful force in baking history but it makes lots of sense - esp some of the old european cakes baked with yeast. This makes me appreciate it so much