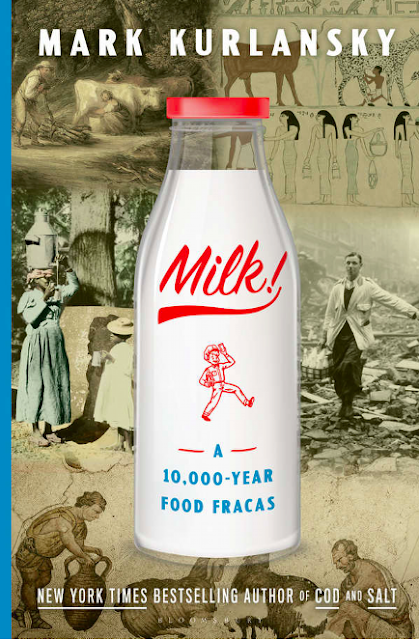 Just published last week: Milk: A 10,000-Year Food Fracas by Mark Kurlansky. As a big fan of Kurlansky's earlier books -- including Cod and Salt as mentioned on the cover of Milk -- I'm very sad to say that he hasn't maintained his earlier standards. Milk is a poorly organized, disjointed, and badly thought-out book, in my opinion.

Maybe the topic is just too wide for a single book. After all, cows, goats, sheep, camels, yaks, water buffalo, mares, and other domestic and even a few wild animals have provided milk to many societies over the last 10 millennia. In several places, Kurlansky compares human milk and the milk of other species in terms of fat content and other nutritional values. He describes a large number of societies that use milk products. The early chapters are in more-or-less chronological order -- but not entirely consistently. Eventually the organization becomes even worse. For example, there are two separate discussions of the Icelandic dairy product skyr in widely separated chapters.

Many millennia is a lot of time for people to argue about whether it's healthy to consume dairy products, whether it's ok to feed babies animal milk rather than breastfeeding them, and a lot of time for humans to evolve away from lactose intolerance. These issues are also presented at great length -- somewhat beyond my tolerance. The same issues keep coming up again and again, but the narrative seems to jump around in a disconcerting way.

Humans have consumed a lot of milk as well as a lot of cheese, butter, ghee, yogurt, creamy soups and sauces, milky alcoholic drinks, and baby formula! In 10,000 years we humans have had vast experience with contaminated dairy products. We've put in a lot of effort to learning how to make dairy products safer. Disasters have afflicted the dairy industry -- up to and including Strontium-90 in the mid-20th century. Kurlansky covers these and many ongoing issues: GMOs. antibiotics, organic farming, "mad cow" disease, what it costs to run a dairy in America now, and more. But it doesn't add up to a coherent story, at least not in this book.

Recipes appear throughout the earlier chapters. They are often quite amusing, for example:


"TO MAKE A FINE SYLLABUB FROM THE COW"
"Sweeten a quart of Cyder with double refined sugar, grate nutmeg into it, then milk your cow into your liquour, when you have thus added what quantity of milk you think proper, pour half a pint or more, in proportion to the quantity of Syllabub you make, of the sweetest cream you can get all over it." (pp. 109-110).

Some recipes, like this one, really illustrate the ways that milk has been used in the past, though few of them would be any use in a twenty-first century kitchen. Eventually, the large number of recipes and some of the other details and repetitions make quite a few of the chapters seem padded, as if the author didn't really have enough to say about a particular time, place, or issue.

In conclusion: I'm disappointed!
Posted by Mae Travels at 10:48 AM

I haven't heard the word Syllabub in ages! I'm not sure I even knew what it was apart from a drink. I love blogging -- you always learn something new!

That's too bad this was a disappointment, especially as you have enjoyed his previous book. That really is a huge topic to write about though as you had mentioned all the animal sources that give milk.

Too bad this didn't work for you. I love Kurlansky, so will likely give this a go anyway.

Thanks for the review. I will skip this one.

Congrats on winning the May Foodies Read at Heather's blog for this post!