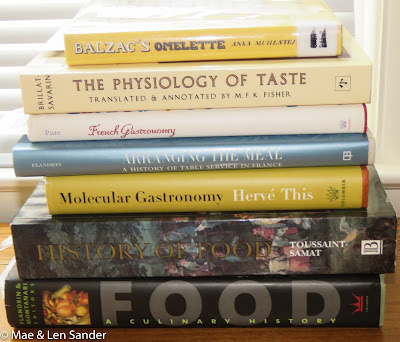 Cookbooks, history books, and memoirs about French cuisine are popular and fascinating, and I've read and cooked from quite a few of them. The majority of these works, however, were not written in French or written by French people. I've challenged myself to find books on the history and culture of food written in French by and for French readers -- and thus to learn what French people read when they want to read about food. I hope to find some books that will be appropriate for future reading in my culinary history reading group, to whom I've suggested that we try to read some actual French sources rather than just Americans.

Using google.com, google.fr, amazon.com, amazon.fr, and the bibliographies of books I've read, I have identified some such books, though I've mainly located academic sources rather than books written for a general reading public. Quite a few of these are very general histories of food in human history or of French food throughout all of French history, while I would like to find more specific histories comparable to those popular in the US. Also, I haven't yet found many very recent ones, although I've searched the best-sellers in amazon.fr -- a few sound interesting but do not seem to have appeared in English translation.

The photo above shows some of the French food books, other than cookbooks, that I own. I have read several of them, and have already written about a few on this blog. This is a preliminary list of French food books translated into English.

All photos and text copyright 2018 by Mae E. Sander. Published at maefood dot blogspot dot com. If you read this elsewhere, it has been stolen.
Posted by Mae Travels at 10:26 PM

Mae,
That was quite a project to research French Cookbooks by French authors..Sounds like you came up with some good finds

Please don't tell me you've read all these or I will really feel like a slacker!

That's a good personal challenge, trying to read about the cooking and feelings about food in French. I have several French cookbooks and one that talks about the terroir, wines and culture. I don't have any of the books you posted here but I ought to take a photo of the ones I have.

@Jeanie -- I have not read all of them, especially the very long encyclopedias and collections of essays, which I dip into from time to time. But I'm working on reading more!

These look wonderful. Thanks for sharing them!