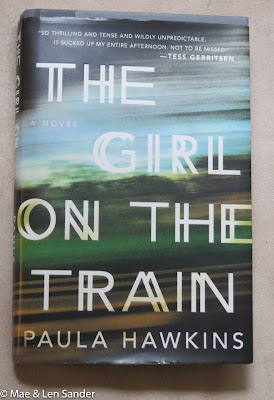 Sunday, I noticed this book: The Girl on the Train by Paula Hawkins -- a book that had been on my list but never quite made it to the top. So I helped myself from Anne's Little Library. I was very happy because I wanted something unusual to read, and this is a thriller, not one of my usual genres.  I finished reading it today, and very much enjoyed it.

The psychological twists and turns of the story are very gripping. First-person internal narratives, which alternate among several of the characters, work amazingly effectively, creating immense suspense.

But I'm pretty late to the party -- everyone who had something to say about this book probably said it a couple of years ago. 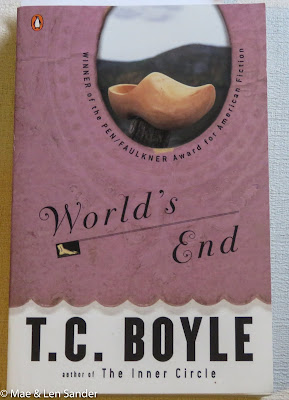 Not long ago, I found this in the Little Free Library: World's End by T. C. Boyle, published 1987. Some of his later books, especially The Tortilla Curtain and some of his fiction about historic figures such as Stanley McCormick, John Harvey Kellogg, and Frank Lloyd Wright, have really appealed to me. I enjoyed World's End, but felt that it was somewhat dated. I think his writing improved over the years! I wasn't going to write anything about this book, but just wanted to mention finding it.

Several other Little Free Libraries are scattered around my neighborhood. As I walked past another of them the other day I saw one of the delightful children's books by Russell and Lillian Hoban, but I didn't take it since I don't have any children around to read to. Such a great idea for recycling books! I'll have to choose a few good titles from my massive book stacks to contribute to Anne's library.
Posted by Mae Travels at 7:45 PM

It's a great idea with the free libraries! Wish we had it here.
I like thrillers but the "Train" book took me a while to get into and then it moved swiftly along. Turned out good with the twists.
I really liked "The Tortilla Curtain." A book of both desperation and hope. A well told story! I will have to check out "World's End" now.
I'm reading "Abraham Lincoln in the Kitchen" now, interesting, for sure!
Thanks for your book reviews!

I love those little libraries. I have a few to drop off to the one up north near the cottage on my walking path. I'd love to do one -- it would make me feel less guilty on books!

I liked Girl on the Train very much. I'm not big into those thriller kinds although there are a few writers whose work I've liked a lot. There's a writer named Ruth Ware who is always on the NYT best seller list and I haven't liked hers at all. In fact, I just put one in my resale pile after the first two chapters. Life is too short!

We have a Little Free Library in our neighborhood and it's so much fun!

There is a Free Library in Thomasville Georgia, right in the little town square. I always liked the idea of putting books in and taking some to read and return later.

Girl on the Train was a set of sad characters but i liked it.

We have a few of these. I love them. It is always fun to see what the books are.