"Having slaughtered, plucked, drawn and washed the chicken according to the caïda, or tradition, fill its cavity with a stuffing..." I read these instruction in the recipe "Chicken stuffed with almonds, semolina, and Raisins" in Traditional Moroccan Cooking: Recipes from Fez, p. 105.

When I saw these words, I knew that this recipe wasn't quite right for my kitchen. Obviously, it's no trouble for me to buy a chicken that is already dead and clean. However, my chicken from Whole Foods was far too young and tender to be cooked as described in Madame Guisaudeau's sixty-year-old cookbook. The spices and flavors of the recipe, however were tempting, so I combined this recipe with "Roast Chicen with Couscous, Raisin, and Almond Stuffing" in Arabesque: A Taste of Morocco, Turkey, and Lebanon, by Claudia Roden, p. 92. I was very pleased with the result, and it seemed to please my dinner guests too. 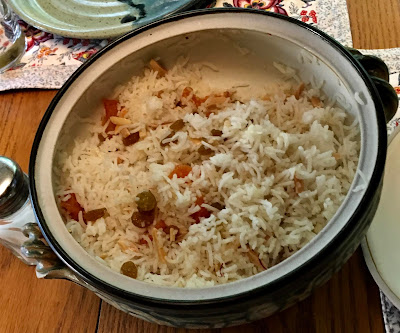 One change I made: I substituted rice for the couscous or semolina in the original recipes. The seasonings were saffron, cinnamon, sugar, and orange blossom water. Blanched toasted almonds, raisins, chopped dried apricots (my own addition), and a large piece of butter added to the flavor profile. Following the instructions in the recipe in Arabesque, I steamed the rice separately from the chicken and then tossed it with the other ingredients. 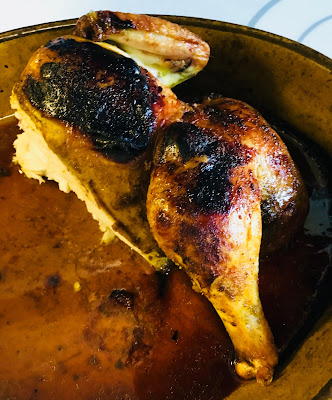 The chicken was first rubbed with olive oil, lemon juice, and the Moroccan spice blend ras el hanout. After the first hour of cooking at 400º F, I brushed it with honey to create a nice brown skin. As I often do, I spatchcocked the chicken before roasting, which enables it to cook more evenly than a whole chicken.

The recipe in Traditional Moroccan Cooking suggests actually stuffing the chicken with the semolina mixture, but I think that's more appropriate for roasting the less-tender bird. Although the techniques were somewhat different, I think these are both variants of the same recipe. I've been curious to try some of the recipes in both cookbooks, and this was a very delicious start at using them.
Posted by Mae Travels at 9:00 AM

I really do have to try Moroccan food sometime. I love all the ingredients and I'll bet it is wonderful!

I love ras el hanout and use it in many things. The chicken version yo cam up with sounds fabulous. I love how you combined the two. I do that a lot also!

Great flavors. I love spatchcoking chicken before grilling for the same reason.

I have Claudia Roden's Spanish cookbook. Such a beautiful looking book and one that I can spend ages looking through time and again.

Mae,
Years ago I bought Claudia's first book because I realized that she had a similar background to my husband's family and unlike my mother in law's sharing, I was able to get some accurate recipes for authentic Middle Eastern food. I never checked to know that she has since written many other books. ( Just went on Amazon)
Although I don't eat chicken, I'm sure I will find other recipes I would love!! Thanks for this post

I often spatchcock chicken breasts, but never a whole one. Will have to give that a try. Your meal sounded fabulous, so many wonderful flavors!

Great colour on that chicken. Have a great week. Cheers from Carole's Chatter

I've never brushed chicken with honey but that sounds like it would be so good!

Those are wonderful flavor combinations. I'd like to try that. Off to the library for that cookbook......