Over the top: more food shows from Netflix 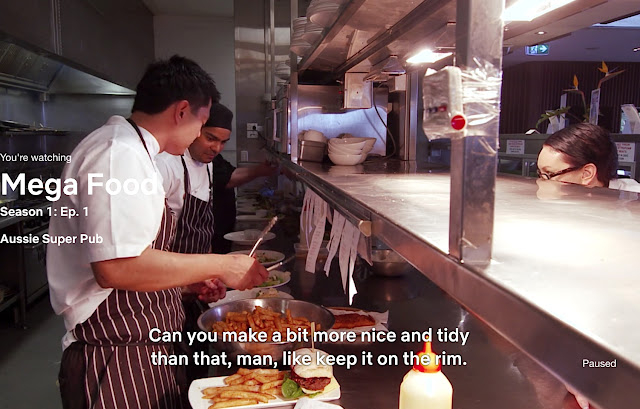 Netflix watchers, ourselves included, seem to be insatiable when it comes to food shows. We are alternating among a few newish ones: Mega Food (dated 2013, released on Netflix early this year); Nailed It (March); and Ugly Delicious, which we've been watching since it came out in February.

The first episode of Mega Food is about a gigantic restaurant/pub in Queensland, Australia. The food there looks fabulous -- watching it made us ravenous, which I can't say any of the other food shows have done. The owners and managers seem incredibly amiable and disciplined, and the atmosphere portrayed in their kitchens is really impressive. They buy local greens and berries from farmers, butcher their own meat, make bread and pasta, and established good supplier relationships. The plates being sent out of the kitchen all look delicious. They even buy beautiful old lumber and serve as their own contractors for building and remodeling their quite large establishment.

The second episode of Mega Food was set in Florence, Italy. It followed a caterer who was setting up temporary kitchens and huge cocktail parties and buffets for a major fashion event, including dozens of waiters and service workers. I found it much less interesting than the first episode. We will probably only watch one or two more in this series, which was made in England (I think).
The third Netflix series is Nailed It. It's not actually labeled a food show but a "reality" show, and it's closely copied from The Great British Baking Show. The judges include highly professional bakers, but the contestants are rank amateurs who are given impossible tasks to perform. At least the contestant who produces the least abject failure is awarded $10,000.

Although the participants seem amused by their inevitable failures, not humiliated, this show just doesn't do much for me. I was enticed to watch by an enthusiastic review in the New Yorker titled "The Joys of Netflix’s 'Nailed It!,' the Baking Competition That Celebrates Kitchen Disaster" by Helen Rosner. Too bad I don't share her enthusiasm.

Ugly Delicious has many episodes, and we are still enjoying them. David Chang, the host, has such an enormous ego that you can't really help liking him. I think of him as a very lovable con man. (Can his restaurants really be worth that much for a meal? Well, maybe. I have never tried them, though I did read the menu outside the one in Aspen a few years ago. All right, maybe he's not a con man!)

This week, we watched the Ugly Delicious episode on barbecue -- which Chang defines as anything cooked with lots and lots of flames, including a variety of Asian foods. Here, with friends, including famous food writer Fuchsia Dunlop, he's eating Peking Duck in China: 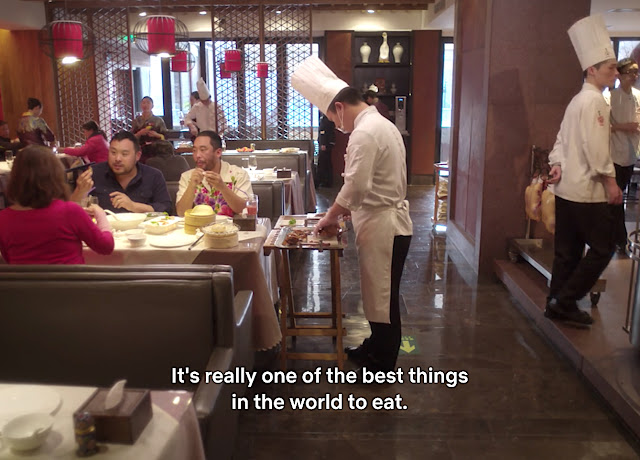 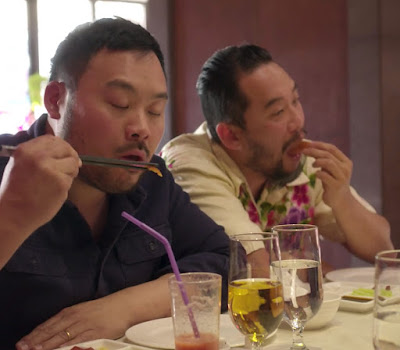 All images are screen shots from the Netflix shows we watched this week.
Posted by Mae Travels at 9:34 AM

Nice review! We barely watch TV, so I had no idea these even existed. I've been missing some good stuff! And it's interesting how the way we handle food has evolved. Everyone wears gloves these days in most US restaurants. I remember in George Orwell's _Down and Out in Paris and London_ when he's working in a kitchen, saying that the more expensive and fancy the dish, the more likely it will be tasted, poked, and probed numerous times by the kitchen staff -- to make sure it's done correctly. Anyway, fun read -- thanks.


RE gloves.
Good hygiene practices probably means that gloves are redundent and it is really, really, easy to contiminate a glove.

The reason for gloves in a lot of fast food places is likely a) because someone thinks it looks safer] including local governments, b)working pace and conditions make it difficult to maintain good hygiene practices, c) it is hard to train a lot of low-wage part-timers in the importance of good hygiene when they are not likely rewarded for taking a minute to wash hands properly instead of slinging food.

I like Ugly Delicious but I hope he doesn't take the Anthony Bourdain route. Sometimes he gets a bit caught up in his views. We've been enjoying the Great Chefs series with its gorgeous photography.

I'm not much of a TV watcher but my husband and son love shows like that.

I'd love to see the show done in Australia. Checking our library for that one.

Thank you for the nice birthday wishes!

Never really thought about Netflix having cooking shows. We usually what British detective series on it. Now I'll have to do a little more searching...thanks.

I reviewed NAILED IT a while back. I thought it was loads of fun.

I am totally addicted to the Australian cooking show like MasterChef Australia and My Kitchen Rules Australia.
I do like Ugly Delicious.

I watch a lot of Netflix but haven't checked out the cooking shows! I'll have to give them a try!

Netflix has some some great food shows. I agree with you about the markets in France-there are some representations made that I am not too sure about-they are still fun to shop.

I have Netflix so I'll be checking these shows out.

I just got netflix. Thanks for sharing this!