A Rich Brew: How Cafés Created Modern Jewish Culture by Shachar M. Pinsker describes café life in Odessa, Warsaw, Berlin, Vienna, New York, and Tel Aviv, from the 19th century to the era before World War II. As I read, I couldn't help comparing the descriptions with my impressions of cafés I know in the 21st century.


"Literary descriptions of the Romanisches Café suggest the essence of the encounter of multilingual Jewish writers with the urban space of Berlin. These writers encountered Berlin modernism within the walls of the Romanisches Café, and their endless hours there left strong marks on their literary and intellectual development." (A Rich Brew, p. 183)


The Café des Westens, founded in 1897, was frequented by Bohemian writers and artists of the era, notably the expressionists. "The drinks and the homely food there were reasonably priced, and waiters were willing to extend credit. On the second floor ... were free billiard tables and chess boards." (A Rich Brew, p. 163-164.) 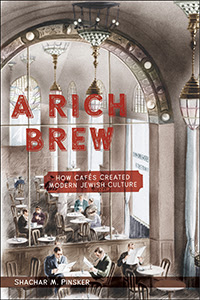 Pinsker interestingly explains the way that cafés in these six cities provided a space for writers, artists, actors, dramatists, journalists, and many other intellectuals -- especially Jews -- to meet, to work, to relax, or to see and be seen. Although A Rich Brew is a serious work of social and intellectual history, I found it quite readable and enjoyable, with only a little academic jargon. The illustrations include photos and many sketches and drawings that capture the café atmosphere and depict or make fun of the personalities who patronized them.

The early roots of the cafés in Odessa, Warsaw, and other European cities began at the time when Jewish individuals were escaping from the limited background in ghettos and shtetls, and from the requirement that they practice some type of Jewish religion and participate in Jewish study. For some the new social atmosphere of the café replaced the old study house where men pursued Jewish learning. Like these study houses, the café was almost exclusively for men, though Pinsker tries to explore the exceptional cases where women became part of the picture. It's beyond my capability to summarize or review the subtleties of this deeply presented history.

In most cases, only the price of a cup of coffee (or tea which was often cheaper) was enough to allow a poor writer to work or talk for much of the day. Besides tea, coffee, and sometimes stronger drink, some cafés served food, expanding the time one could stay. For example, Herrick's Café in New York in the 1890s and early 1900s was a gathering place where Yiddish writers and journalists met "nightly at the round tables with their red and black checkered cloths, smoked Russian cigarettes, downed oceans of tea, and consumed pounds of Hungarian strudel." (p. 192) In Goodman and Levine's on East Broadway, members of a group called Di Yunge immersed themselves "in a discussion that went on until early in the morning, fueled by coffee, tea, pancakes, blintzes, cookies, rolls, and cigarettes." (p. 212)

Pinsker's use of eyewitness descriptions of the cafés is intriguing: many of the participants wrote and published journalistic accounts of these experiences. Even more intriguing are Pinsker's summaries of novels, short stories, and even poems that take place in cafés or cite the cafe atmosphere.

As I read Pinsker's description of the beachside cafés of pre-1948 Tel Aviv, I thought about the walks I've taken on that beach, which is still lined with cafés, ice cream shops, and restaurants, as are the streets a few blocks inside the city. I feel that the atmosphere is completely different. Tourists, Israelis on their day off, office workers having lunch, neighbors out for a stroll -- I don't think the people I saw were artists, writers, or journalists writing for small independent publications. But who knows?

At the end of the book, Pinsker cites a poem written by Israeli poet Avot Yeshurun in 1972, titled "January1, night." He points out how the poem captures "the ruptures and absences felt at Tel Aviv cafés" and he offers a long analysis of the poem and how it indirectly invokes both the former café culture and the Holocaust, which is the subject of the Joan Baez song. (p. 297-298). The poem:


In a café by the side of the street.
Those who were here -- are gone.
He who is numbered as dead
and he who's numbered as slumber.
...
Playing chess. The coffee
house is full December.
Listening to Joan Baez
singing I Remember.
January 1, 1972.
Posted by Mae Travels at 6:00 AM

This is a fascinating and intriguing post. I love how you integrated your own photos and thoughts to help point out some of the contrasts. It looks like a very interesting book.

The difficulty now in the U.S. is to find a coffee house with room for more than a single person--every table seems to have one person with a computer. How can the artists and writers have a conversation or a chess game when they can't find a place to sit down?

Thanks for your post. I'm interested to read that book. I've read coincidentally about the importance of cafes in the cultural history of Europe, and have often thought that if I could travel through time, I'd want to hang out in those cafes. I love that cafes have become a thing in the US, but I feel that the cultural space that they occupy isn't quite the same.

Great personal and reflective post. I love your photos. I'm glad you found my book interesting.

Loving all the personal reflections you share in this post Mae and the comparison of photos from the past to today.