"The Tuscan Child" by Rhys Bowen 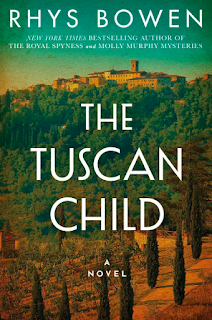 Rhys Bowen's book The Tuscan Child was highly recommended by at least a couple of food bloggers*, who particularly enjoyed the detailed accounts of fabulous Italian meals. The novel's action takes place in a small farming town in Tuscany. The narrative alternates between the experiences of two characters at two different times in history. In 1944, Hugo Langley, an English nobleman is serving as a bomber pilot in World War II. When his plane crashes, a woman from the village helps him hide from the Nazis. In 1973, immediately after his death, his daughter Joanna, now 25 years old, goes to the town to try to find out about her father's experiences there.

The novel is suspenseful and enjoyable, and the food descriptions are indeed mouth-watering. The naive Joanna, first-person narrator of the 1973 chapters, is constantly impressed by the cuisine of her peasant hosts in the fictional village, and fascinated by their great cooking skills as she watches their preparations. She contrasts the delicious Tuscan food with the limited British food of her childhood and her life as a single woman in London. It's a fun read for a foodie.

Unfortunately I think the author's food research was a bit sketchy, and that many of the specific dishes that feature in Joanna's narrative have more to do with high-end 21st century restaurants and food writers than with accurate portrayal of Tuscan peasant cooking in 1973. (The food of 1944 was extremely scarce and doesn't figure in my critique.) Joanna's enthusiastic descriptions don't, in my opinion, seem convincing as a naive reaction, but use too much now-popular food jargon and too many cliches about both English and Italian cuisine. Her quotes from her the Italian hostess seem a bit too predictable and sophisticated as well.

Here, to explain my reactions, are specific examples of the indisputably delightful descriptions of the food served to Joanna on her visit in June, 1973, and an explanation of why I'm not convinced that they represent the reality of peasant life in rural Tuscany of that era. My impressions are based on the overall way that the book echoes current food writing, and on specific mistakes about regional food that are present in these passages.


"'Asparagus from the garden,' she said. 'It is asparagus season. Such a short time that we make the most of it and eat asparagus at almost every meal.'

"She placed a dish of white stalks in front of me, then drizzled them with olive oil and grated Parmesan cheese over them from a big block." (The Tuscan Child, p. 133, emphasis mine)

The problem here: white asparagus is a specialty of a region near Venice, and doesn't grow in simple gardens like those in the description. Joanna's hostess in the village gathers the asparagus from "a feathery plant." (p. 152). White asparagus grows under a mound of sand to prevent it from being green, not as described. Maybe this is trivial, but it's part of a pattern of ignoring the regional differences in Italian foods.

The descriptions of food preparation and attitudes of Joanna's hostess also frequently sound more like high-end food writing than like the spontaneous conversation of a relatively uneducated woman. For example:

"She laughed. 'So simple. It is what we call part of our cucina povera— simple food for the peasants. And a good way to use up yesterday’s stale bread. It is simply stale bread soaked in broth, and then we cook the garlic, tomatoes, some carrot, and celery and add these to it, then serve with olive oil. That’s all.'" (p. 99).

Cucina povera is a term you expect from culinary writers -- not so much from peasants describing their own food. It's a bit unconvincing.

I have similar doubts about the foods mentioned in the following meal:


"'We will have a good meal tonight if it is to be your last,' she said. 'A mushroom risotto, perhaps, before the aubergine Parmesan and panna cotta, definitely.'" (p. 278).

Risotto, the rice dish, is characteristic of northern Italy around Milan, not Tuscany. Aubergine (eggplant) Parmesan is a classic dish from around Naples, Calabria, and Sicily, not Tuscany. And panna cotta is a specialty of the Piedmont and is known in Sicily. These dishes are also very popular outside Italy. Panna cotta and risottos appear on trendy menus at prestigious restaurants. The author pretends that Joanna is experiencing the authentic deep Tuscan cuisine, unspoiled and naive.

Finally, this last meal ends with a famous liqueur:


"We finished the meal with the little dishes of panna cotta— smooth and white and slipping easily down the throat, and to accompany it a glass of limoncello, the local liqueur."  (p. 288).

Limoncello became highly popular outside Italy long after 1973, which supports my theory that the author used modern sources about Italian food, not historic ones. More importantly, limoncello is not at all a specialty of Tuscany: rather, it is "mainly produced in Southern Italy, especially in the region around the Gulf of Naples, the Sorrentine Peninsula and the coast of Amalfi, and islands of Procida, Ischia, and Capri." (Wikipedia, "Limoncello," retrieved June 10, 2018)

All in all, The Tuscan Child is a readable book. The plot is a little exaggerated, but that's ok. The characters are portrayed effectively, and in general I liked the settings. In the Afterword, the author mentions doing real research about World War II airplanes -- I have no knowledge of this aspect of the book, so I take her word that she made it accurate. I wish she had done the same with her descriptions of Tuscan peasant food.

*I'm grateful to blogger Tina at the blog Novel Meals for the review that got me to read the book. Check it out at Tina's blog HERE.

I get you. I'm a musician by profession, and every literary reference I think I've ever read about making music is, you know, commendable, but ultimately incorrect.

Hmmm....The opening blurb sounded promising but I'm not sure I would enjoy the novel now.

I did not know this about white asparagus. You certainly did your homework where food is mentioned. I have to say though, I make eggplant Parmesan at home quite a bit and it's not native to north Florida :-)

Thanks for the mention on your site!

@Tina -- Americans have been absorbing food from many cultures for over a century. If you wrote a book that took place in small town America in 1973, many Italian foods could easily appear -- such as eggplant Parmesan in Florida.

However, The Tuscan Child claims to be about peasant food in an untouched part of Italy in 1973, so you would expect to find regional dishes made from locally grown produce. The author says that's what's happening. But the food is not consistent with those claims.

It can be annoying when you find a food reference that doesn't quite fit the time and setting for sure. It still sounds like a book worth reading--if I can ever get a handle on my current TBR stack. ;-)

I do too - she's written so many good ones - and I've got this one on my reserve list.

It's sad to me that her statements don't reflect the place and time of the book.

Too bad about the mistakes. I am leery about a lot of historical fiction. I prefer to read about the past when it was lived and written about, if possible.

Haha...I do the same thing when reading crime novels. Sometimes it makes it hard to concentrate on the story line.