"The Name of the Game is a Kidnapping" by Keigo Higashino 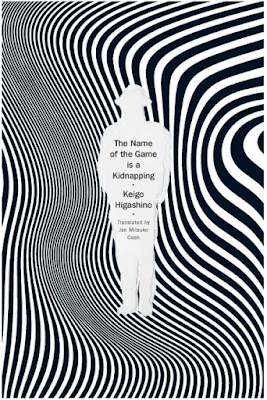 "Keigo Higashino (東野 圭吾) is one of the most popular and biggest selling fiction authors in Japan—as well known as James Patterson, Dean Koontz or Tom Clancy are in the USA." (source: Goodreads)

Higashino's suspense novel The Name of the Game is a Kidnapping (Japanese publication 2002; English translation published 2017) has the same fast-paced psychological interest as the four of his other novels that I have read. It also has a surprise ending, which I will not give away. The others were police procedurals, but with an emphasis on the suspects, their position in society, and how they behave in extreme circumstances.

In The Name of the Game is a Kidnapping, the entire focus of the story is on a man, Sakuma, who is almost randomly drawn into a convoluted plot by other people.  He is the narrator, and thus his point of view is the only one we receive. From the publisher:


"Battle-tested project leader at a PR firm and slippery bachelor, Sakuma sees himself as a player. His smug self-regard doesn’t seem entirely unfounded, both in love and at work. When is idea for a mini-theme park is dismissed as too costly and vacuous at the last minute by a major client he seems to have met his match.

"Katsuragi, an heir and executive at the global car maker, Nissei Auto, is back from a marketing stint in the US with an authentic conviction that everything is a game. Once the man’s daughter by a former mistress teams up with Sakuma so she can come into her inheritance in an expeditious manner – Juri is indeed her father’s flesh and blood – the game is good to go!

"And the name of this game is a kidnapping!" (source)

Juri and Sakuma team up to deceive her father -- and as a result, she hides out at Sakuma's bachelor apartment. One of the only things she can do while passing away the time there is cook, so as in other Higashino novels, there are some very interesting food descriptions used to emphasize the situation of these two people. For me these highlight differences between Japanese food preferences and those in America -- even when the food is supposed to be western style. For example, she makes a dish called cream stew, which I had never heard of; it turns out to be chicken and many vegetables cooked in a white sauce, often using a packaged sauce. It's based on western food, and became popular partly because it was served as Japanese children's school lunch. From the novel:


"When I got home, Juri was cooking something in the kitchen. I tried to guess what she was making based on the smell.

"'Did I have the ingredients to make cream stew?' I asked standing at the kitchen entrance.

"'I scrounged through your fridge. Your vegetables were going bad, but I got to them in time.' I remembered I had bought them intending to make gratin." (Kindle Locations 1344-1348).

As it happens, not foreseeing the cream stew, Sakuma has brought home a bento box for dinner.


"She looked into the bag and then at me.

"'A bento from Yasuman. Wow. The chef there sometimes goes on TV. Then I’ll have this instead.'

Well, what does happen to the stew? They eat it for brunch. Several other instances of what they eat for breakfast or brunch also suggest his tastes in food. For example, in the first scene, we see his bachelor life, and we also heard why the vegetables for cream stew were in his refrigerator. It strikes me that this is the type of attention to detail that makes the suspense build so effectively! The passage:


"I fried some ham and eggs, toasted bread, and warmed up canned soup for my breakfast.

"Lately, I was lacking vegetables. There had to be some cauliflower in the refrigerator so I decided I’d have a gratin with a lot of that in it tonight." (Kindle Locations 76-77).

Staying with him at his apartment, Juri sleeps in his bed, he on the living room couch, and he has to fix her breakfast:


“Just wait. I’ll make something now.” I got up and went to the kitchen. The morning menu I decided on was toast, boiled eggs, and vegetable juice. Putting on coffee was a bother." (Kindle Locations 1178-1179).

Or later when she is still with him, she gets up and says:

"Ham, eggs, vegetable soup, toast, and coffee made up the menu. It wasn’t what you’d call cooking, but considering the contents of the refrigerator, she couldn’t have done any better."(Kindle Locations 2094-2098).

Are these typical Japanese breakfast foods? Well, to my knowledge, they lean more western than the older traditional Japanese breakfasts of miso soup, rice, pickles, and other savory and fermented things that don't seem like Breakfast to me! I think these details are characterizing Sakuma as leaning very much toward a western lifestyle.

In any case, breakfast in a suspense novel always means one sure thing: the author uses meals to punctuate time going by and to emphasize the need of characters to stay in the moment. Higashino does this with mastery. It's a very readable and enjoyable book.
Posted by Mae Travels at 2:49 PM

Interesting what you are able to discover about the character based on his food preferences!

The breakfast foods do sound very American- Never heard of cream stew but it looks good. Sounds like an enjoyable read

I've never heard of cream stew .. I would have likely made vegetable soup or stir-fry. :)

It sounds like an interesting book and I do love a book set in Japan. The cream stew is very interesting. ;-)