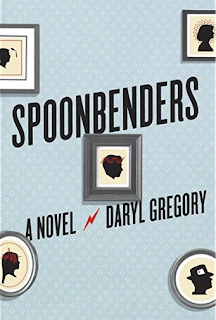 Spoonbenders, a novel by Daryl Gregory (published June 2017) bends the all-too-common dysfunctional-family stereotype into something new, strange, and highly readable. Maureen, the mother of the family at the center of the book has been dead for 21 years. In her 31 years of life, she had been a truly amazing and talented psychic. Her three children and her grandchildren inherited various forms of her gift.

Unfortunately, as the novel opens in 1995, not a single member of this family has ever found a comfortable or productive way to apply the unbelievable things they can do. Maureen's husband Teddy -- who has no psychic gifts at all -- had been a con man when she had met him, in the early 1960s. He mainly made a living playing cards with suckers or compulsive gamblers.

In the course of the novel we learn that while Teddy had worked for the mob, Maureen had been employed by a top-secret government spy service -- but I won't spoil the novel's revelations with more about this. Like much of the plot, which is full of revelations, surprises, and reversals, their activities in slight-of-hand and also in authentic psychic actions are all very amusing -- or as Mattie, the grandson with his own psychic powers realizes at the end: "Everything he knew about his family was not wrong, exactly, but turned sixty degrees." (pp. 393).

With their gifted children, Teddy and Maureen for a while had a vaudeville-type "magic" act combining Teddy's con-man skills with the very genuine psychic tricks the rest of the family could do. (Note: it's a fantasy novel!) Their near-success as performers ends with a disastrous TV appearance where they are shown up by one G. Randall Archibald. As I was reading, Archibald constantly reminded me, in an off-beat way, of the real life "Amazing Randy." In the acknowledgements, in fact, the author says:


"I owe an apology ... to one of my heroes, James Randi, aka the Amazing Randi. His lifelong crusade to investigate psychics, faith healers, mediums, and frauds of all paranormal stripes inspired a story that might provide aid and comfort to the enemy. ...  There are no mind readers, no remote viewers, no water dousers, no one who can warp kitchen utensils with the power of their mind— except in fiction. But isn’t that enough?"

As in many books I've enjoyed, I found that food often played a kind of grounding role in the very complicated, emotionally dangerous, and sometimes violent fantasy story. Chop suey, "an ultra-bland dish" their mother made sometimes; Greek lamb sausage, also a favorite childhood memory; hand-made pizza, associated with the unsavory mob associated with their father's card-sharking and their brother's dangerous debts ... the family eats pretty standard stuff. And somehow it becomes significant, thanks to the memories of their mother overseeing the children cooking her favorite recipes.

For example, in a hectic scene almost at the end of the novel, all the characters in the entire book gather in a single place: the family back yard and house, where Buddy, the clairvoyant brother is preparing a barbecue and where all the strands of the plot are somehow about to be wrapped up. Some quotes that characterize this assembly, which are interspersed with the exciting finale --

"Buddy had turned the back patio into an outdoor kitchen. Ground lamb sat out in big stainless steel bowls, and a plate held a mound of freshly chopped mint. God he loved Mom’s lamb sausage. Buddy was at the grill, wrapping potatoes in aluminum foil." (p. 349)

"With Joshua’s help he managed to chop all the garlic, and on his own blended four pounds of ground meat and another pile of the mint-feta mixture, but now he’s almost out of time, and he has to make all the patties." (p. 352)

Finally Buddy, who had been tormented by his clairvoyant visions of both his past and his future, ends up with a normal restaurant meal: "He turned the plastic-coated pages in a slow simmer of panic. Each picture was more luscious than any pornographic photo he’d ever seen: seductively crossed chicken strips; gleaming pot roast; wet, juicy quesadillas; steaming piles of spaghetti. Too many choices. Far too many. The Build Your Own Burger section made his heart race. ... remembered meals were the ultimate comfort food. But to be set loose in an environment where not only could almost anything be ordered, but if that failed, could be assembled from a vast number of ingredients? Madness." (p. 396)

Dysfunctional families in popular lit these days are kind of a dime a dozen. Kids have problems with developing a sense of identity and understanding their rapidly changing minds and bodies. Parents have problems with kids, jobs, and money. Grandparents have problems with growing old and seeing how the next generation turned out. MEGO: "My Eyes Glaze Over." You can find it in Urban Dictionary. When I used to write management presentations, my most boring customer, who knew he was boring, brought up MEGO often when worrying about his impact.  It doesn't fit Spoonbenders, but it sure does fit a lot of other books!

PS -- This is a hilarious book. I'm not sure I was clear that it was really funny and fun to read!
Posted by Mae Travels at 6:00 AM

This one just sounds fun, Mae!

I need a funny book! Awww that would be fun

I’m just finishing Rebecca and I would like a funny book now, mix it up. That’s is some plot outline!

Oh wow, fun and fascinating!! Great review and I enjoyed the excerpts. :)

It does sound like a fun book. Adding it to my TBR stack. ;-)

How quirky ... Have a great week. Cheers from Carole's Chatter

It is often the small details that bring back strong memories!! Sounds like a fun read.