"Eating is one of the great joys of life. Don't let people use misinformation or bad science to deprive you of the pleasure of good food." -- The Bad Food Bible, p. 198. 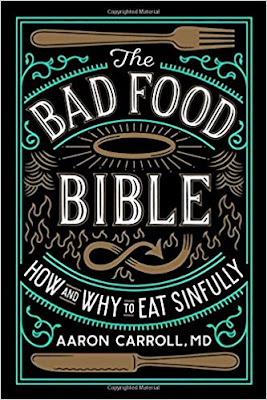 Aaron Carroll writes essays in the New York Times that debunk commonly held misconceptions about food. He calls out the perpetrators of misinformation, and tries to help people think more clearly about conflicting claims. His columns have interested me for a while, so I was happy to learn that he recently published a book along the same lines: The Bad Food Bible: How and Why to Eat Sinfully.


Most of the chapters of Carroll's book deal with foods that valid research has shown aren't nearly as bad as their reputations make them out to be. Carroll has a great sense of humor and irony, and doesn't tolerate fools gladly, which makes it a very readable book as well as enlightening. He effectively cites his own experience as a father, a physician, and a human being in explaining what motivated him to explore food myths and science.

I was especially interested in what Carroll disclosed about diet sodas and the artificial sweeteners in them, MSG, coffee, and alcohol. The overwhelming result of research studies about each on is that they aren't nearly as bad as people believe they are -- and in fact, consuming them in reasonable quantities probably offers health benefits.

Carroll debunks the widespread confidence in gluten-free diets, except for properly diagnosed celiac and allergy sufferers, and he summarizes the risks of adopting gluten-free substitutes for things like bagels or cereal. He discusses research about topics like GMOs and organic foods. He puts the risks and rewards of eating meat, butter, and eggs into perspective -- and concludes that you can eat them in reasonable quantities without incurring the dangers that are often attributed to them. It's a very useful set of information: but you have to be open to learning about the scientific results, not to trusting in journalists, popularizers, and even quacks.

The value of Carroll's book is in the details. He explains how to identify scientific studies that are valid and valuable, and to recognize when writers have cherry-picked studies that confirm what people want to believe. He reviews the literature on each topic, explaining why studies that use human subjects are considerably more useful than those that use rats (which, he reveals, are particularly susceptible to bladder cancer, making the scare value of many studies less important). And he is never afraid to call out bias or bad science. Above all, he asks his readers to consider the real evidence, not the prevalent demonizations of foods like gluten, eggs, or GMOs. The one food that he doesn't defend is sugar.

Here are a few of his conclusions: if you want to critique these results, you really need to read the details before you fall back on what you think you know:
If you think you already know why butter, eggs, diet drinks, coffee, salt, and so on are bad for you, it might be useful for you to read this book.
Posted by Mae Travels at 8:12 PM

As I sit here drinking my Tab this morning (sugar free, thank you!) I am relieved to learn diet drinks aren't so bad. This is my morning beverage (well, OK, my all day beverage if we're honest, when it's not tea or cocoa or lemonade or wine.) So, I leave this post with far more relief than I would have expected! Thank you!

Wow it is nice to know things I thought were bad and reduced them from my diet aren't bad. I need to pick up a copy of the book. Thanks.

Mae,
I like to eat real food- despite liking the taste, I have never felt good using artificial sweeteners so I avoid them They have always given me headaches. As for gluten free- Personally I adhere to eliminating gluten because as one with Celiac my body will not tolerate it. However, I agree that gluten free substitutions are not usually not healthy.

"They" are always trying to find bad things about coffee but the studies overwhelming find benefits.

Thanks for an interesting post about this book (which I now want to read). It's true that there is so much misinformation out there -- lots of work to sift through everything. Eating well and healthfully is quite a challenge.

Always nice to have your own conclusions, based on research, validated. The only thing I would disagree with is the artificial sweeteners. Artificial says it all, plus the yucky taste. Actually I try to avoid excess sugar.

My understanding is that artificial sweeteners do cause digestive symptoms for some people (like me) - I approach any 'expert' including this one with scepticism. Cheers

Skepticism is a good attitude, Carole, unless you mean by it that you will refuse to read anything that doesn't corroborate what you already believe. The good thing about this particular book is that it is looking at scientific studies, not just anecdotes -- the author doesn't claim any "expertise," just an open mind to looking at science. As I said in my review, don't judge it unless you read it first! Can you cite the studies that find that artificial sweeteners have a bad effect on digestion?