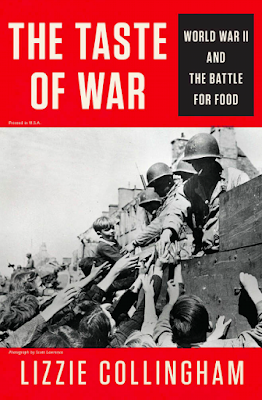 "Invented in the 1920s, quark was a cross between yoghurt and cream cheese," I read in Lizzie Collingham's book The Taste of War: World War II and the Battle for Food (p. 354). My attention was riveted: this very late date for such a traditional product really surprised me. Because Collingham's excellent and challenging book seems very reliable and has lots of footnotes, I tried to find out more.

A quick check of online sources assured me that quark -- both the word and the dairy product -- dates back to the fourteenth century; more about that later. Still curious, I went to Collingham's footnote to her description of how the German authorities promoted quark as an excellent food to support their developing (and horrifying) economic and social policies. I found an article with the somewhat off-putting title "Marktordnung and Autarkic Housekeeping: Housewives and Private Consumption under the Four-Year Plan, 1936–1939" by Nancy R. Reagin. Here, I found that what took place in the 1920s was more like a discovery than an invention:


"Quark was unknown to many German consumers before the mid-1920s, when bourgeois housewives’ organizations (working with the German Dairy Board) began small promotion campaigns for the product. NS [Nazi] women’s organizations mounted a much more extensive effort: distributing Kostproben (samples); offering public cooking demonstrations and special cookery courses centred on Quark; trying to persuade local merchants to stock the product; and distributing millions of Quark recipes. The shortage of butter and margarine no doubt aided their attempts to persuade housewives." (German History, Volume 19, Issue 2, 1 April 2001, p. 171)

Quark consumption in pre-war and wartime Germany increased under the influence of these promotions, continuing in popularity until the present. Recently, quark has also been introduced to American cooks and consumers, though it's still something of a specialty product. The Whole Foods website describes it thus:
"Funny name. Delicious stuff. Quark can be classified as a sort of curd cheese somewhere between yogurt and small-curd cottage cheese. It's quite low in fat, versatile in the kitchen and, like yogurt, is sometimes sold blended with fruit."

Many products -- including quark -- are generally known as white cheese or non-aged cheese. You surely know some of them: French fromage blanc; Greek, Turkish, Israeli, Polish, Russian, and other white cheeses; maybe Icelandic skyr; Italian ricotta; and American cottage cheese and farmers' cheese. These differ in fermentation times and agents, in size of the curds (if any) and ultimately in taste and texture. Interchanging them in recipes doesn't necessarily give consistent results -- and could be a big mistake!

But let's get back to the question of the history of quark and of the wonderful word itself. According to the etymological dictionary I consulted (see image), the word came from Russian "tvarogü" and Polish "tvarog" through late Middle High German, other German dialects etc. In other words, both the word and the cheese have a long history -- even if they only became popular because they fit into Nazi ideological food ways. Fortunately this part of the history is well forgotten in the more recent use of quark in German cuisine and the introduction of quark to American consumers!

A word as wacky-sounding as "quark" has a lot of appeal, so another chapter in word history is its use by two impenetrable and charismatic twentieth century intellectuals: James Joyce and Murray Gell-Mann. Joyce's book Finnegan's Wake is famous for its incredibly opaque word play. Gell-Mann, a Nobel-prize-winning physicist is noted for his discovery of a family of elementary particles which he named quarks. He found the name in Finnegan's Wake. Gell-Mann, who is not only a physicist but also a lover of words, describes his choice thus:


“In 1963, when I assigned the name "quark" to the fundamental constituents of the nucleon, I had the sound first, without the spelling, which could have been "kwork." Then, in one of my occasional perusals of Finnegans Wake, by James Joyce, I came across the word "quark" in the phrase "Three quarks for Muster Mark." Since "quark" (meaning, for one thing, the cry of a gull) was clearly intended to rhyme with "Mark," as well as "bark" and other such words, I had to find an excuse to pronounce it as "kwork." But the book represents the dreams of a publican named Humphrey Chimpden Earwicker. Words in the text are typically drawn from several sources at once, like the "portmanteau words" in Through the Looking Glass. From time to time, phrases occur in the book that are partially determined by calls for drinks at the bar. I argued, therefore, that perhaps one of the multiple sources of the cry "Three quarks for Muster Mark" might be "Three quarts for Mister Mark," in which case the pronunciation "kwork" would not be totally unjustified. In any case, the number three fitted perfectly the way quarks occur in nature.” ― Murray Gell-Mann, The Quark and the Jaguar: Adventures in the Simple and the Complex, cited in Goodreads.

Not all Joyce scholars agree with Gell-Mann's interpretation of the Joyce quote. Here's an alternative way to see it:

"Joyce scholars suggest that it may have been an altogether different cry that had inspired Joyce in this fragment of the Wake - a one heard at a German market place. The vendor’s cry, according to this theory, was something like ‘Drei Mark für muster Quark!’ which can be translated as 'Three Marks for excellent curd cheese!'" (source)

Well, that seems to be enough for another Wordy Wednesday. I hope to write another blog post here about the wonderful book The Taste of War: World War II and the Battle for Food. (Update: here is a link to the blog post about Collingham's book.)
Posted by Mae Travels at 6:00 AM

How interesting! I thought quark had something to do with computers.

I'm nerdy enough that when I first saw the title to the post, I thought physics. :-) Love the word -- it just rolls off the tongue, doesn't it? Had no idea quark (both word and dairy product) dated back to the 14th century. Fun stuff -- thanks.

Who would've thought! I've never heard of the word, and am happy to have learned something new today!

I was familiar with the scientific definition but not the foodie one! Wow!

That's a good and interesting word. I like the history you found.

yes indeed that's a fabulous word and of course the temptation to make like a duck is huge when saying it:) cheers S

interesting! I wonder how many atomic physicists know this meaning of quark

I'd heard of the scientific quark but not the food one. Fascinating! Now I'm curious to try some. Thanks for the detailed history of the word.

Interesting! I've had Quark but had no idea of the origins. (That book looks really interesting too.) Thanks for sharing! ;-)

The word quark always reminds me of Star Trek characters!! When I was a teenager I worked in the deli section of the supermarket and we sold quite a lot of quark but I never really knew what people did with it! Both ricotta and quark seemed so exotic back in the day!!

Very interesting article! Quark is delicious and very versatile, even if the Nazi propaganda promoted it. Valerie