What did Benjamin Franklin Eat? 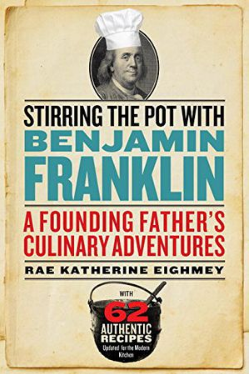 "In 1718, twelve-year-old Benjamin had been working for his father for two years and was well versed in all aspects of the candle business," writes Rae Katherine Eighmey in her recent book Stirring the Pot with Benjamin Franklin. To show the reader how Franklin and his father Josiah worked, she imagines a vignette where they bring a heavy handcart full of suet from Boston's Butcher's Wharf to their combined home and candle-making business. Besides the suet, which was to be rendered and made into dipped candles, she suggests that the Franklins could have purchased two ox cheeks to be made into a soup or stew for their dinner. Eighmey continues with a description of the way that Benjamin's mother Abiah and his sister Jane may have prepared an Ox Cheek Stew:


"Abiah hangs one of her brass kettles on the bottom trammel hook, directly over the coals, drops in a bit of butter, or salt pork, to melt, then adds the meat to brown. Next she pulls a couple of 'middling' carrots from the root cellar, each about a foot long and two inches in diameter, and chops them into chunks. In like manner she cuts up other root vegetables -- onions, parsnips, beets -- and celery and adds all to the pot. She gives it a quick stir, raises the pot to the middle hook, and leaves them to 'roast' along with a small chunk of ham for seasoning. ...

"Abiah has the help of youngest daughter Jane.  She is six years old. Abiah will keep an especially watchful eye over her youngest children in the kitchen area. Fifteen years earlier, the family lost a son, Ebenezer, who fell into the tub of washing suds and drowned at the age of three.  By the time Abiah has finished cleaning up the porridge dishes from breakfast, set the kitchen area to rights, and made up the beds, the soup will be ready for the next step. She returns to the hearth, raises the kettle to the top hook, and adds ten quarts of water brought from the backyard well. Now it can simmer away all day, with an occasional check and stir." (pp. 21-22)

This quote illustrates the methods that Eighmey uses to create a detailed and vivid picture of Franklin's era to modern readers who probably have little knowledge of cooking over a hearth fire in an early colonial kitchen. She explains that the cooking technique described here is based on a contemporary household management book from 1717, and for the benefit of really curious readers, offers a recipe for Ox Cheek Stew -- the image of a large cooking pot is an illustration from the recipe. She suggests using beef shanks in case you can't find ox cheeks. (I once did try to find them, and it's difficult; the butcher at Whole Foods pointed out to me that each animal only has two cheeks!)

Stirring the Pot with Benjamin Franklin follows him throughout his 84 years and his several careers. Eighmey explores what he ate at each stage of the way -- including his brief time as a candle-making helper, his training as a printer, his development as a businessman and publisher in Philadelphia, his marriage, his fame (especially for creating "Poor Richard" and his famous sayings), his second career as an experimenter with electricity, his third career as a politician and diplomat in London and Paris, and finally his participation in the Constitutional Convention that gave us our current system of government. What a life!

I especially enjoyed reading about Franklin's dining experiences during his very long diplomatic stays overseas. Eighmey shows that he enjoyed London and Paris dining experiences, but also that he very much missed the American foods of his early life, especially the American varieties of apples and the many types of products made with corn. His wife Deborah, who never accompanied him, was often asked in letters to send food; for example, in one letter from London he mentioned that he seldom saw roasting apples: "I wish you had sent me some... Newtown Pippins would have been the most acceptable." Deborah did send him food, including apples, cranberries, and ham; in 1760 he wrote her: "The apples are a great comfort to me." (p. 161) Later, she also sent dried venison, smoked beef, specially prepared cornmeal called nocake, and other American products. (p. 187)

During the American Revolution, Franklin was extremely important in his mission to Paris, where he arranged crucial military and financial support for the American cause. He ran a large household, which eventually became the US Embassy. For this reason, he employed a professional cook; thus Eighmey was able to find ledgers of food purchases for his kitchens and details of meals prepared during that time. His chef, named Finck, in his employment application, provided a list of simple daily fare and also more elegant dinners that he agreed to prepare for the household and guests:


"He agreed to supply a lunch, a dinner -- the main meal of the day served in the middle of the afternoon -- and an evening supper. The early meal consisted of porridge, bread and butter; sugar and honey, with coffee and unsweetened chocolate as beverages. For dinner, ... Finck  specified hors d'oeuvres of butter, radishes, and cornichons -- pickles; a large entrée of beef, veal, or mutton; followed by a poultry course; a small 'in between' course, two 'plats d'entrements'; then two vegetable dishes. For dessert the menu suggested two plates of fresh fruit in the winter, four in the summer; two compotes -- cooked fruit frequently served warm in a sugar syrup; a selection of cheeses, cookie-like biscuits, and bonbons. Finally, a frozen dessert was to be served twice a week in the summer and once in the winter. So it appears that Benjamin Franklin ate ice cream, a popular eighteenth-century Parisian treat, less well-known in America or England." (p. 225)

Some specific foods in Finck's repertoire: "soup and porridges, fat hens, roast pigeons, baby peas, fried artichokes, small pâtés, and chops, along with fruit -- peaches, plums and apricots." Also mentioned: turkey, the American native bird which Franklin was backing as a national symbol rather than the bald eagle.

Recently, I also read Eighmey's earlier book about what Lincoln ate (blogged here: What did Abraham Lincoln Eat?) The Lincoln book to me was slightly more lively and vivid, but I find both to be very valuable food and history books.
Posted by Mae Travels at 9:25 AM

Mae,
Your review has incited me into wanting to read this book. I love biographies, enjoy reading about food and am from Ben Franklin's Philadelphia-- It's on my list

You always feature the most interesting books! Must add this title to my TBR list right away. I love reading about historical figures and what they ate. :)

I'm adding it to my to-read list as well. I love books about what early Americans ate (even if they sojourned awhile abroad!)

You review the most unique books, not the norm best seller's list books, Mae! I love biographies and have just purchased this from Amazon. History and food work for me. I've read books about John Adams and am thinking that Franklin was there in Paris when he was. Sounds like maybe Franklin was the original "foodie!" And I bet he was fond of libation also. Interesting post, Mae! Thanks!