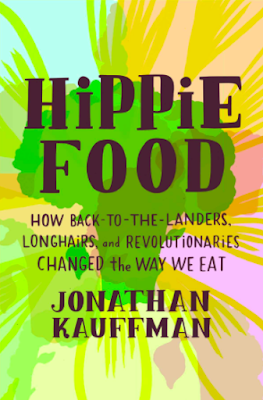 This morning I read a brief article by Jonathan Kauffman in the New Yorker: "How Carob Traumatized a Generation." It was very amusing, so I immediately bought a Kindle edition of his new book Hippie Food. I was reading it all day, and I'm done.

The book starts with background about food fads and theories before the sixties. The chapters about the sixties and seventies were pretty good, describing the individuals who developed various trends like tofu and granola and who wrote cookbooks like The Tassajara Bread Book, the Moosewood books, Diet for a Small Planet, and others, many of them still fairly well-known and even popular. It's very much a book about people first, and their accomplishments seem at times almost incidental, which I think is a flaw. There's quite a lot about macrobiotic theory and its founder George Ohsawa. Here's a description of some macrobiotic ideas of "yin" and "yang":


"A carrot was more yang than an onion by a few degrees, but it wasn’t merely yang: each root had a yin end and a yang end. When you cut the carrot, you had to take that into account, as well as what you were going to cook the carrot with, to ensure you balanced yin and yang in the meal. In addition, you shouldn’t peel the carrot, for fear of wasting vital nutrients, and when you cooked the carrot, you should do it with a calm, happy spirit, understanding that you were broadcasting your mood to your dining companions through the food." (Kindle Locations 1344-1349).

The growing influence of world cuisines on the natural foods and organic foods trends was an interesting trend, which is also covered at length -- as in this passage:


"Despite its global inspiration, the vegetarian food that was emerging in the 1970s did not— could not— replicate the flavors of the cuisines it was appropriating. Dishes were stripped down, adapted, bastardized, often denuded of spice.

"A few dishes that became iconic in the 1970s may, perhaps, have benefited from this waving off of tradition: both crepes and quiche— soigné in the 1960s, ubiquitous in vegetarian restaurants in the 1970s— were liberated from their classic forms to become containers for thousands of variations. Other dishes didn’t fare as well. Sometimes taking out the meat meant removing the one ingredient that gave a particular dish any flavor. Some of the world’s culinary glories were reduced to puddles of melted cheese." (Kindle Locations 3673-3679).

I was amused at his many lists of hippie restaurants and co-ops here in Ann Arbor: of course I remember most of them, some of which still exist.

However, as the book went on, it didn't sustain my interest. At first it was really about food history, even if it over-emphasized the life stories of the people who developed the various trends. Then it degenerated into descriptions of the infighting among various alternative markets and co-ops in Austin, Texas; Minneapolis; and a few other places. It got more and more tedious. The culmination of all this, according to the author was the founding of Whole Foods. Sort of a cross between economic history and just gossip.

I'm disappointed.
Posted by Mae Travels at 6:00 AM

I love those cookbooks from that time. The original Moosewood is still one of my favorites, as is The Vegetarian Epicure by Anna Thomas. What I love about them is not only the recipes, but the "vibe" as conveyed in the illustrations and commentary. I still love when I find local food co-ops, as opposed to places like Whole Foods. One can find so many hidden treasures at the local places, in addition to still being able to feel "the vibe."

I was ready to buy it. Then I got to the last of the review. Maybe I will add it to my library check out list. Thanks, Mae.

Thanks for a really honest assessment. It's always disappointing when a book doesn't live up to expectations, especially after you've been reading awhile. It had so much potential!