"Biga and poolish are terms for pre-ferments used in Italian and French baking, respectively, for sponges made with domestic baker’s yeast. Poolish is a fairly wet sponge (typically made with a one-part-flour-to-one-part-water ratio by weight), while biga is usually drier. Bigas can be held longer at their peak than wetter sponges, while a poolish is one known technique to increase a dough’s extensibility." (source)

Technical words are fascinating. Baking bread is fascinating. In our family, experiments with bread are ongoing: my daughter in Virginia has been raising a couple of sourdough starters (blogged here) and my husband has been trying out various recipes for non-sourdough bread. Thus we've come across the two words biga and poolish.

While biga is an Italian method and Italian word, poolish is a French word, which is said to mean "Polish," because this particular bread-baking method originated in Poland. A credible history that supports this origin is elusive, but there's enough information to conclude that French bakers adopted the poolish method in the 1840s when baker's yeast first became available, and that they learned from Viennese bakers who were influenced by a method already in use in Poland. Prior to the introduction of baker's yeast, French bakers had used brewer's yeast or used the levain method; that is, sourdough starter, which uses wild yeasts. The poolish method was a dominant way to bake in Paris from the mid 19th through the early 20th century. More modern, automated, faster methods of baking French bread replaced this method during the 1920s.

Here are a few references to the history of the poolish method and of the word itself.

In Lionel Poilâne's book Guide de l'Amateur de Pain (published 1981) the use of a poolish is recommended to home bakers as being easier than the use of levain -- which means sourdough starter. M. Poilâne doesn't have much confidence in home bakers, so he doesn't think they can manage to keep a sourdough starter alive. He says that bakers (presumably meaning French bakers) commonly used the method during the end of the 19th century and the beginning of the 20th century. (p. 32)

The Atlantic ran a story by Betty Suyker about Poilâne in 1972, which contrasted his very retro baking method with modern French methods and also with the poolish method. She credits an Austrian army officer named Zang, who founded a bread-baking business in Paris in 1840 ("A la Recherche du Pain Perdu" by Betty Suyker, The Atlantic Monthly, July 1972, p. 90. A wonderful article with many other facts about the history of bread in France.)

The Taste of Bread by Raymond Calvel offers additional detail about the origin of the poolish method in Poland in the 1840s. He points out the use of baker's yeast in poolish in the 19th century, though says it was less common than the levain method. Starting in the 1920s, he says, direct use of baker's yeast as the main fermenting agent became the method of French bakers. (p. 45. This book, translated from French, provides a great deal of information about the chemical processes of making bread.)

Many of the online references state that the word poolish means Polish. Some French sources name Marie Antoinette or Marie de Medici in association with the introduction of this method, but this doesn't hold up to other known historic facts, especially the fact that baker's yeast, used in a poolish, wasn't available until the 19th century. These writers are apparently confused because the use of brewer's yeast, which had been known in ancient times, was reintroduced to France in 1665 -- a date not relevant to either of the two French queens. There's also been an effort to find a Yiddish origin of the word, but there's no evidence for that either (source).

More knowledgable writers narrow down the introduction of the poolish method to post-Napoleonic Paris. Views differ about Zang, whose Paris bakery and large staff of bakers introduced the method in the 1840s, and whose history explains why many French bakeries were called Viennese.

In the very exhaustive Handbook of Dough Fermentation, Ronald L. Wirtz writes: "Austrian bakers who emigrated to Paris around 1840 initiated the production of Vienna breads and other luxury products. A Polish nobleman, the Baron Zang, introduced the use of the poolish, a multistage fermentation method based on the use of prepared yeast that is still practiced by specialists today." (Ronald L. Wirtz, "Grain, Baking, and Sourdough Bread: A Brief Historical Panorama") 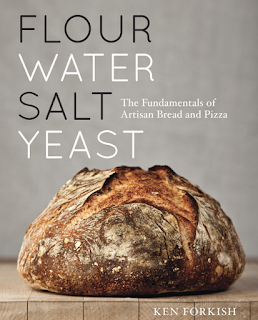 Many currently-popular baking books now use the terms biga and poolish, and have very detailed explanations of how to use both of these methods, including Flour Water Salt Yeast by Ken Forkish, whose recipe, "White Bread with Poolish" was used for the bread I pictured. American sources began to use the term some time in the late 20th century.

Ordinary English and French dictionaries that I've looked in have no entry for the word poolish. This includes the Merriam-Webster online dictionary, the Oxford English Dictionary, the Petit Larousse, the Robert (French), and other online English dictionaries. It's a purely technical word, I guess.

Happy Valentine's Day and Happy Wordy Wednesday!
Posted by Mae Travels at 6:00 AM

You know I shared this with Rick! I love how you dig deep into food. I always learn a lot when I'm here (even if I probably forget it then next day when I sink my teeth into a good old taste of bread!)

I'm not surprised I didn't know those words - I'm a complete failure at baking bread.

What a wonderful read! Loads of info, much of it new to me. Love the words "biga and poolish." Biga is new to me; I've actually come across poolish before (a few years ago there was a blog, now defunct, that sometimes made bread using this method; alas, trying to think of the name of the blog, and can't). Anyway, you have me yearning to bake bread now!

This was so much fun to read. I'm an old-time sour dough baker, but I'd never heard of these two terms. I always suspected starters went back a long time and in various places, not just with the American pioneers. Thanks for sharing this.

This would be great for Valentine's Day, better than anything chocolate for me! Good read, good words, good bread! Thanks!

Yes, this reminds me again how much of a bread rut I am in! I always wonder if I have problems with sourdough because I've had too many ferments going, vinegar, water kefir, sometimes sauerkraut... But I love to eat other peoples...

My homey sourdough starter kept going for 5 years and might still be happy if someone had taken care of it during my lengthy health problems.

I'm too lazy to keep a sourdough starter going but I often bake with a sponge (biga, poolish). I haven't made much bread this year for some reason.

Both terms were new to me, and I bake bread regularly. In fact have probably killed more than my share of sourdough starters, which is why I gave up on them. Most notably a French starter, named Genevieve, supposedly over 200 years old. Sad... also some purchased from International Sourdough Starters (I think that's the name) which company scores starters from old bakeries and families all over the world. They take more TLC apparently than I had.

Bread baking has always seemed intimidating to me, but it's fascinating to learn more about it. Thanks for informative post.

Very informative post. I am not a baker and especially but I admire anyone who bakes bread. The term 'biga' is new to me but I know 'poolish' from a foodie novel that included bread baking--if only I could remember which book it was! ;-)

I haven't made any homemade bread in years. This is a very interesting post!

I've been using a sponge in my focaccia since the first time I saw Biba's Italian kitchen on food network about a billion years ago (before the internet). I copied down her recipe as quickly as I could and then I made it that night. What a wonderfully spongy texture it made the focaccia. It was my favourite.