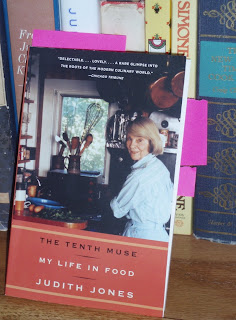 I just read The Tenth Muse: My Life in Food by Judith Jones. I positioned the book for its photo on a random location on my kitchen bookshelf, and it landed in front of at least 4 books that she helped create. As an editor at Knopf, she was the first American to appreciate Julia Child. Imagine this: she used Mastering the Art of French Cooking before it ever was published. And without Jones's realization of its genius, maybe no one else would have had the chance. She continued with quite a few others. And before she worked at Knopf, she read and recommended The Diary of Ann Frank to its first American publisher, Doubleday. (p. 45)

I really enjoyed the early chapters, telling how Jones felt about the American foods of her childhood, and how she came to love French food. Her adventures in Paris are delightful. Then she returned to New York and desperately desired a book that would help her learn to create the food she had enjoyed in France.

I enjoyed her contrast of early-1950s France with the culinary desert of the USA, and her struggle to find fresh, good meat or vegetables in that canned-good era -- and how Julia Child changed her life and so many others. Her later chapters, though not quite as exciting, combine memories of eating with descriptions of what it's like to edit cookbooks by authors who need various kinds of flattery, editorial suggestions, and other kinds of help. The final 80 pages offer her personal recipe collection along with comments that are also worth reading. (I haven't tried the recipes, but they sound good.)

As I have recently been reading the works of M.F.K. Fisher, I particularly enjoyed the descriptions of Jones's relationship with her (though she didn't edit much by Fisher):

"There is an appetite now [around 2006] for reading all about the behind-the-scenes workings of a restaurant kitchen where the testosterone flows, the vocabulary consists of four-letter words, and the competition is brutal. But what does that have to do with taste?

"It is all the more surprising that a writer like M.F.K. Fisher should have emerged pre-World War II, at a time when America was at a low point gastronomically. Not that her early books were as widely appreciated as they are today, but there was a small, hungry following that cherished her as a writer who dared to embrace food as a part of the sensual life." (p. 150)

Jones often expresses my feelings or suspicions about the current state of food -- though she speaks as an expert, and I have no experience, only indirect reactions. Her comments about the molecular gastronomy adventures in artificially enhanced foodstuffs interested me a lot:

"When I attended Madrid Fusion, the food conference held in Spain in 2006, I couldn't help but think that there was a disturbing amount of manipulation of food going on in these days on the part of the new, highly applauded star chefs. ... I admit to having an aversion to foam, particularly when it is pale green. It reminds me all too vividly of what happens when one's dog has deliberately eaten a large dose of grass to purge himself." (p. 135)

I have some some small criticisms of this book. For one, Jones narrates a variety of experiences without letting the reader know the dates; she may be combining things that happened in various years. I am actually interested in the food history embodied in her life, and would have appreciated a bit more specificity about when this or that event occurred. Also, she seemed very distant about telling about her personal life; in the parts that took place after her marriage, she seemed to be avoiding the profoundly personal.

All in all, though, I feel that her editorship of some of the best food books of the 20th century means we should be very grateful. I say: Thank You, Judith Jones!
Posted by Mae Travels at 3:22 PM

Mae, I have been meaning to read this and simply forgot about it. Thanks for the reminder and for your review!

Lydia,
It's worth reading! I hope you like it.