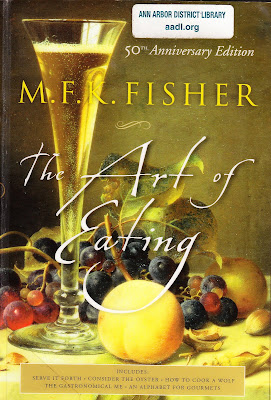 The Art of Eating collects 5 of M.F.K. Fisher's famous books in one volume. I have just finished reading the first of these: Serve it Forth.

Except for a few details (like using the name Cochin China for Vietnam) I would scarcely realize, while reading, that this book had first been published in 1937. The author's point of view on food and food history still seems fresh to me. The beauty and skill of Fisher's writing -- especially the use of quoted conversations to create character sketches -- presents quite a contrast to the books I recently read by Symons and Rossant!

Here are some quotations I enjoyed:
"I do not agree with the Greeks and Romans, that women should be reserved for the end of a meal and served with the final wines and music, nor do I think that Frenchman was right who stated that there are no blue eyes, no curls and dimpled shoulders, which can replace for a true gourmet the charms of a black truffle.
"It is, though, very dull to be at a table with dull people, no matter what their sex." (p. 44)

"We said we were going to live in France.
"She [an acquaintance] said, 'Where?'
"We said, 'Here, there -- maybe Dijon --'
"Suddenly her face was blasted. 'Oh, Dijon!'
"She put her hands up to her eyes and wept and then cried fiercely: 'The smell of it! The smell of Dijon gingerbread! When you go there smell it for me!'
"So we did.
"We smelled Dijon mustard, especially at the corner where Grey-Poupon flaunts little pots of it. We smelled Dijon cassis in the autumn... But all year and everywhere we smelled the Dijon gingerbread, that pain d'epice which came perhaps from Asia with a tired Crusader." (p. 80)

To continue: this afternoon I read the second of Fisher's works: Consider the Oyster, first published 1941. Although it has a few more points where one feels its age, it's also still fresh and fun to read. The fact that she could write so much just about the life of oysters, a few bits of history, and her experiences dining on oysters is in itself amazing. Other books about oysters (such as those by Eleanor Clark and Mark Kurlansky) deviate into tales of oyster cultivation, detailed history, and sociology. Fisher sticks to her subject: basically, eating oysters. I read this book quickly because, unlike the first volume, it contains a number of recipes, which do not take much time to look over.

Here's a passage I liked:
"There are, oddly enough, almost as many ways to eat such a simple dish as there are men to eat it.
"First, several millennia ago, men cracked the shells and sucked out the tender gray bodies with their attendant juices and their inevitable sharp splinters. Then, when knives came, they pried open the two shells and cupped the lower one in their hands, careful not to spill its colorless elixir. And always, even from the beginning, there have been variations on these two simple processes; there has been invented a series of behavior-rules as complex as the recipes to prevent sea-sickeness or how to arrange three tulips in a low jade-green bowl for the local garden show.
"If a man cared, and knew all the rules, he would be really frightened to go into a decent oyster-bar and submit his knowledge to the cold eyes of the counter-man and all the local addicts." (p. 156)

I have on my bookshelf Fisher's With Bold Knife and Fork, and I may have read other books of hers, but I think the works contained in this volume are new to me, and I look forward to continuing my reading project.
Posted by Mae Travels at 12:17 PM

Once MFK Fisher gets into your soul, you will return to her writings again and again. Hers is often the voice in my head when I'm cooking.

Yes. You are so right! I think she's there when one is writing too. The more the better.